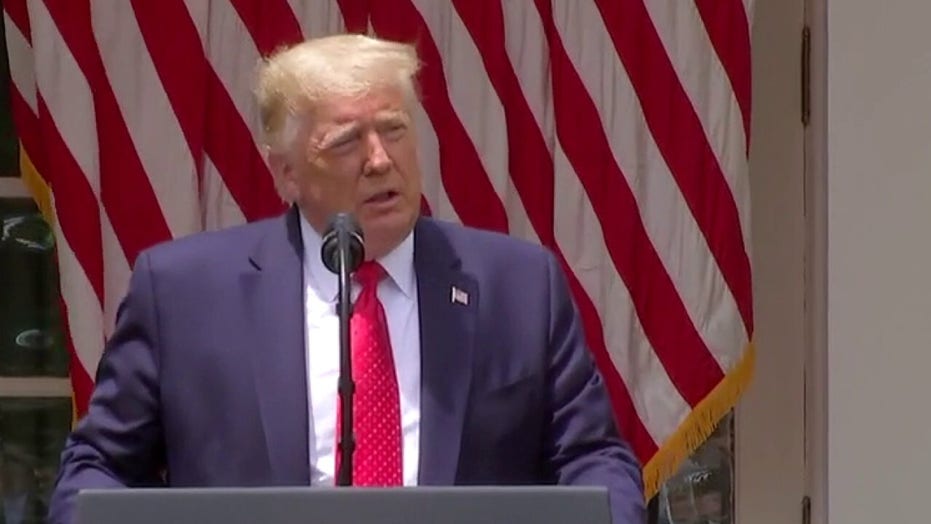 President Trump: 'We take historic action to deliver a future of safety, security for Americans'

President Trump on Tuesday signed an executive order on law enforcement reform and said "chokeholds will be banned except if an officer’s life is at risk" as the nation reels from the death of George Floyd in the custody of the Minneapolis Police Department and the ensuing unrest -- which has sparked calls for changes in policing nationwide as drastic as dismantling entire departments.

The president made comments in the Rose Garden in which he struck a conciliatory tone while also expressing strong support for police before officially signing the order, which he characterized as promoting "the highest professional standards." He also said, "These standards will be as high and as strong as there is on Earth."

"We're united by our desire to ensure peace and dignity and equality for all Americans," Trump said, noting that he met with the family of Ahmaud Arbery, who died at the hands of two white men earlier this year in a high-profile case in Georgia, and families of other victims of racially-charged violence.

President Donald Trump speaks during an event on police reform, in the Rose Garden of the White House, Tuesday, June 16, 2020, in Washington. (AP Photo/Evan Vucci)

"These are incredible people ... and it's so sad. Many of these families lost their loved ones in deadly interactions with police ... All Americans mourn by your side, your loved ones will not have died in vain," Trump said. "I can promise to fight for justice for all of our people and I gave a commitment to all of those families ... We are going to pursue what we said we will be pursuing it, and we will be pursuing it strongly."

According to the White House, Trump's order touches on use of force best practices, information sharing to track officers who have repeated complaints against them and federal incentives for police departments to deploy non-police experts on issues like mental health, homelessness and addiction.

Trump said law enforcement officers would only be allowed to use chokeholds if their lives are in danger.

"As part of this new credentialing process, chokeholds will be banned except if an officer’s life is at risk,” the president said.

President Donald Trump speaks during an event on police reform, in the Rose Garden of the White House, Tuesday, June 16, 2020, in Washington. (AP Photo/Evan Vucci)

The White House on Monday said that the president "stands behind our dedicated law enforcement all the way" but that the executive order would help "uphold clear and high policing standards, promote accountability in law enforcement, and help equip police officers for constructive community engagement."

Trump went out of his way to underscore his support for police in his comments Tuesday, quoting statistics about the number of arrests made by local law enforcement for severe crimes like rape and murder.

"I strongly oppose the radical and dangerous efforts to defund, dismantle and dissolve our police departments. Especially now when we've achieved the lowest recorded crime rates in recent history," Trump said, while acknowledging a "tiny" number of bad police officers. "Without police there is chaos, without law there is anarchy and without safety there is a catastrophe."

Trump added: "When you remove the police, you hurt those who have the least, the most."

The details Trump revealed about the order Tuesday tracked with the outlines that White House had released previously.

Trump said the Department of Justice would provide grants to police departments seeking independent credentialing for use of force and de-escalation training that holds them to high standards and that the federal government would provide funding for "co-responders" like social workers to help police officers deal with issues like homelessness, mental illness and substance abuse.

The order would also help departments secure less-than-lethal weapons that can help reduce the number of fatal encounters with police, and mandate that departments share information on officers who are accused of abusing power "so that officers with credible issues do not simply move from one police department to the next."

The National Fraternal Order of Police (FOP), the largest law enforcement union in the U.S., praised Trump's order on Tuesday.

"It strikes a great balance between the vital need for public and officer safety, and the equally vital need for lasting, meaningful, and enforceable police reform," the organization said. "In our view, President Trump and Congressional leaders are working constructively with law enforcement and community stakeholders to undertake earnest law enforcement reforms that will make our officers and the public they protect safer."

Police unions have long been resistant to reform efforts. 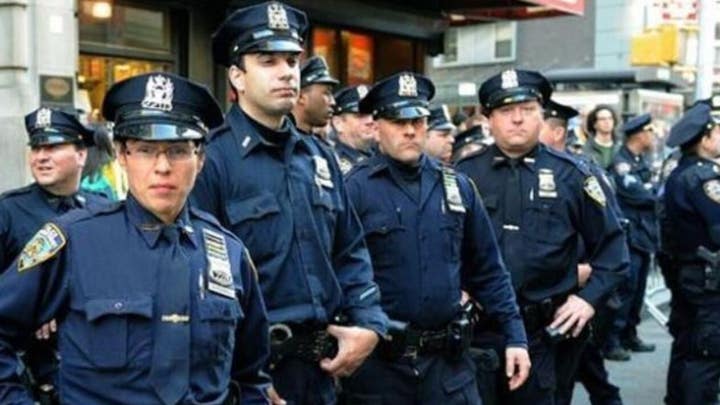 Trump on Tuesday also touted the economic numbers under his administration before the coronavirus pandemic, said that former Presidents Bush and Obama didn't take up the police reform issue because they were not capable and said he is optimistic about a coronavirus vaccine

Trump also Tuesday said he is "committed to working with Congress on additional measures."

But it's unclear whether and when Congress will step in to address law enforcement reform. Both parties have expressed strong interest in doing so, but appear to have already hit obstacles.

Sen. Tim Scott, R-S.C., said on CBS Sunday that addressing qualified immunity -- a judicial doctrine that often protects officers accused of misconduct from liability -- is a "poison pill" for Republicans. Minutes later Sen. Cory Booker, D-N.J., who has led calls to roll back qualified immunity in Congress, said he had received different signals from other Republicans.

A source familiar with Scott's police reform proposal -- he is spearheading GOP efforts on the issue -- told Fox News Tuesday that qualified immunity will not be included.

Trump's order signing event Tuesday comes as he tries to balance the image he has cultivated as both an ally of black voters and as a "LAW & ORDER!" president. The president has regularly touted the passage of the First Step Act -- a criminal justice reform bill -- in 2018 and his campaign has aggressively courted black voters in swing states. Tuesday's order could add to that record.

But his handling of the unrest in the wake of Floyd's death has been controversial.

Trump is currently threatening to step in with federal forces to clear out protesters from a six-block area of downtown Seattle, named the "Capitol Hill Organized Protest," or CHOP, which has been declared "cop-free" by its occupants.

"Radical Left Governor @JayInslee and the Mayor of Seattle are being taunted and played at a level that our great Country has never seen before," Trump said last week. "Take back your city NOW. If you don’t do it, I will. This is not a game. These ugly Anarchists must be stopped IMMEDIATELY. MOVE FAST!"

He also made other comments decried as racist or supportive of police brutality during the height of the riots and protests, particularly one tweet in which the president said "when the looting starts, the shooting starts." 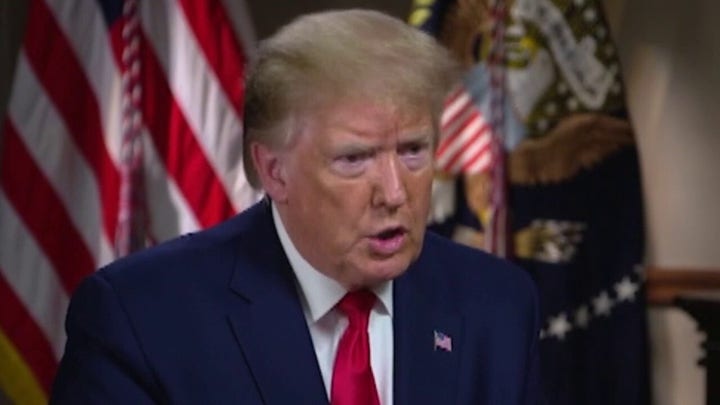 Fox News' Harris Faulkner challenged the president on the comments in an interview in Dallas last week.

"That's an expression I've heard over the years," Trump replied.

"Do you know where it comes from?" Faulker asked.

"It comes from 1967... It was from the chief of police in Miami, he was cracking down and he meant what he said. And he said 'I don't even care if it makes it look like brutality, I'm gonna crackdown. When the looting starts the shooting starts.' That frightened a lot of people," Faulkner said.

Despite the president's order and Congress' desire to get something done on law enforcement, police reform is largely a local issue, with states, cities and towns overseeing departments and holding significant power in the area under the Constitution. That means most tangible reforms are likely to come due to political will on the local level.