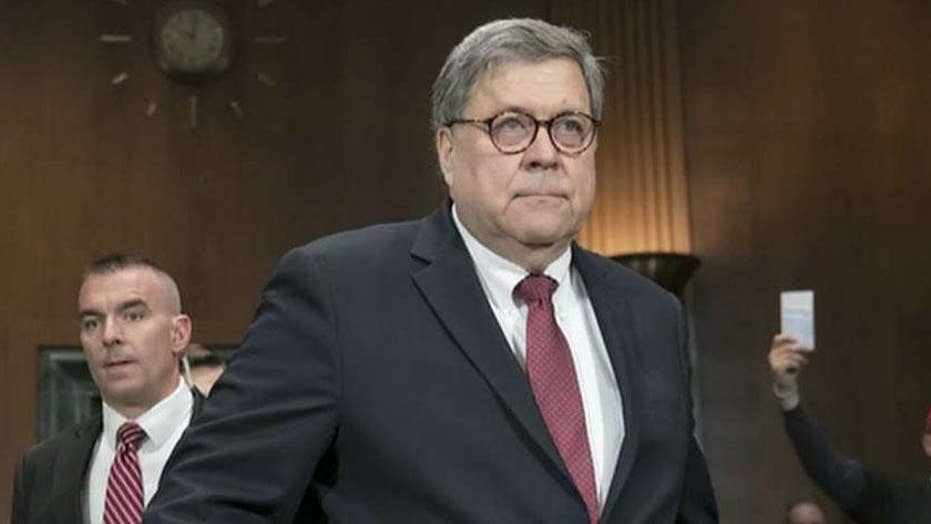 California Republican Rep. Devin Nunes says that Attorney General William Barr and House Republicans will not be swayed by these false claims.

Attorney General William Barr on Tuesday said he has noticed a troubling trend of nationwide injunctions issued by lower courts that have taken their toll on President Trump’s agenda and threaten the political process for future administrations.

Barr, who has been accused by Democrats of protecting Trump after the release of the Mueller report, told the American Law Institute that there is a new trend of judicial "willingness" to review executive action, which injects courts into the political process.

He pointed to the district court in California that in January 2018 issued a temporary injunction to block the Trump administration from ending Deferred Action for Childhood Arrivals, or DACA.

DACA has protected about 800,000 people who were brought to the U.S. illegally as children or came with families who overstayed visas. The Obama-era program includes hundreds of thousands of college-age students.

U.S. District Judge William Alsup said at the time that lawyers in favor of DACA demonstrated that the immigrants “were likely to suffer serious, irreparable harm” without court action. The judge also said the lawyers have a strong chance of succeeding at trial.

The White House was swift to criticize these lower court injunctions and called this particular decision “outrageous.” Vice President Mike Pence recently said the administration will ask the Supreme Court to bar them.

"So what have these nationwide injunction wrought? Dreamers remain in limbo, the political process has been pre-empted, and we have had over a year of bitter political division that included a government shutdown of unprecedented length," Barr said.

ROGER FISK: BARR CAN'T SAVE TRUMP FROM HIMSELF

Barr said nationwide injunctions violate the separation of powers. He said that since Trump took office, there have been 37 nationwide injunctions — more than one a month -- against his office and he said there is likely no end in sight. He said, by comparison, there were two instances where district courts issued an injunction in President Obama’s first two years.

The Associated Press wrote that this is “the latest example of Barr moving to embrace Trump’s political talking points.” Its report pointed out the Trump criticized these rulings at a rally earlier this month, saying, “activist judges who issue nationwide injunctions based on their personal beliefs, which undermine democracy and threaten the rule of law.”

Barr has brushed aside criticism from Democrats that he is in the president’s pocket. He told the Wall Street Journal in a recent interview that he is defending the presidency, not Trump.

“If you destroy the presidency and make it an errand boy for Congress, we’re going to be a much weaker and more divided nation,” he said.