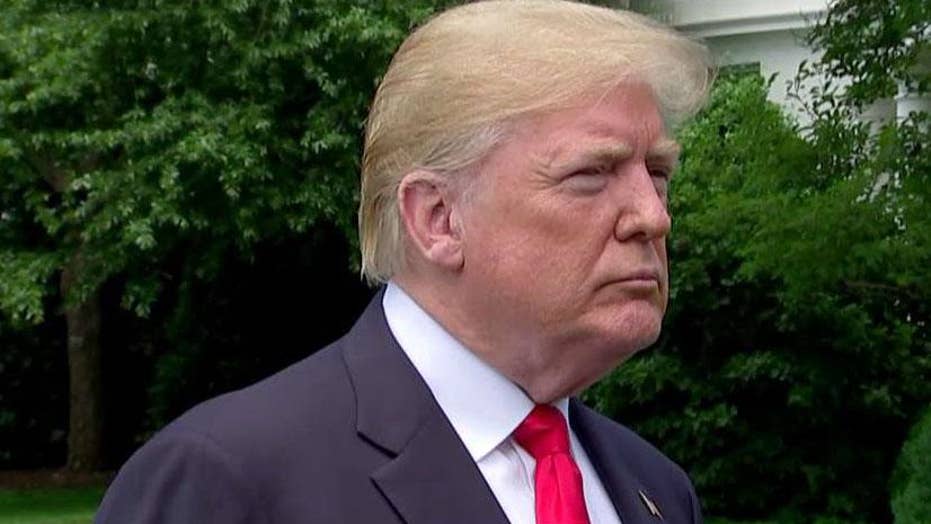 Trump: I did the nation a great service by firing Comey

President Trump addresses the media on FBI informant who met with aides during his presidential campaign.

President Trump issued a thiny veiled warning to James Comey on Wednesday as he suggested a forthcoming inspector general report will cause new problems for the fired FBI director.

The president blasted Comey as he departed the White House for an immigration meeting in New York. The two are battling from afar over the controversy the president has dubbed “SPYGATE” -- revelations that a government informant had multiple discussions with members of the Trump campaign in 2016, at the dawn of the Russia investigation.

But after Comey criticized Trump's attacks on the bureau, the president suggested Comey might want to worry more about the looming IG report on the bureau's handling of the Hillary Clinton email probe.

He added: "If you look at the lies, all the fiction, I think he's got a lot of problems."

It's unclear whether Trump has seen that report, but a draft has been circulated internally. Its release is sure to heighten scrutiny on the bureau's actions in 2016. Already, reports have emerged that the IG will fault the FBI for sitting on a batch of Clinton emails discovered late in the campaign.

Meanwhile, Trump and Comey are clashing over the revelations of an informant potentially snooping on his 2016 campaign. 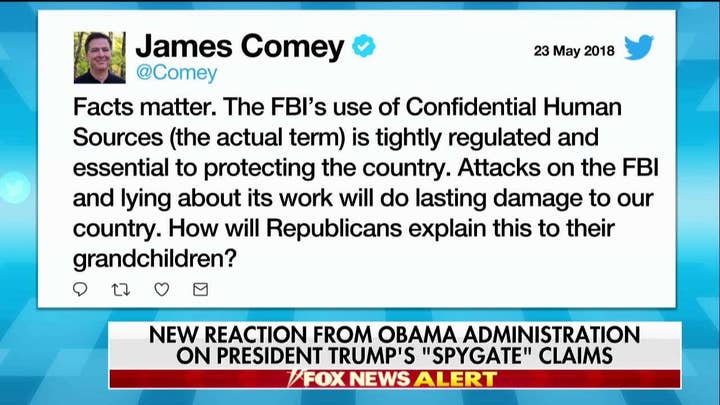 Intelligence and law enforcements interests have defended their role, while Trump and his allies say it amounts to spying on a presidential candidate.

Trump, in a Wednesday morning tweetstorm, called it a “major SPY scandal,” suggesting things have “turned around” on the “Criminal Deep State.”

On Wednesday morning, though, Comey weighed in to defend the FBI and its practices.

“Facts matter. The FBI’s use of Confidential Human Sources (the actual term) is tightly regulated and essential to protecting the country,” Comey tweeted. “Attacks on the FBI and lying about its work will do lasting damage to our country. How will Republicans explain this to their grandchildren?”

According to bureau documents, the FBI’s Confidential Human Source Program is considered warranted when it is “prudent and necessary to provide protection to the identity” of the source, “the information itself,” and the source’s “relationship with the FBI.”

The president Wednesday also told reporters that he did "a great service to this country by firing James Comey."

Former Director of National Intelligence James Clapper also defended the intelligence community’s use of the program on Tuesday, claiming that the FBI informant had to do with “the Russians, not spying on the campaign.”

Clapper, appearing on ABC’s “The View,” addressed the controversy after being asked whether the FBI spied on the Trump campaign.

“No, they were not,” Clapper said. “They were spying, a term I don’t particularly like, on what the Russians were doing, trying to understand, were the Russians infiltrating?”

But on Wednesday, Trump fired back at Clapper.

“’Trump should be happy that the FBI was SPYING on his campaign’ No, James Clapper, I am not happy. Spying on a campaign would be illegal, and a scandal to boot!” Trump tweeted.

Amid the controversy, the Justice Department instructed its inspector general to investigate any alleged “impropriety or political motivation” in the FBI’s investigation into Russian interference and potential collusion with Trump campaign associates in the 2016 presidential election, following demands from Trump.

Earlier this week, the president met with Deputy Attorney General Rod Rosenstein and FBI Director Christopher Wray in the Oval Office, discussing the expansion of Inspector General Michael Horowitz’s investigation to include “irregularities” with the FBI or DOJ’s “tactics concerning the Trump campaign.”

White House Press Secretary Sarah Sanders also said that during the meeting, the three agreed that White House Chief of Staff John Kelly would “immediately set up a meeting with the FBI, DOJ, and DNI together with congressional leaders to review highly classified and other information they have requested.”

That meeting is slated for Thursday, and will be with House Intelligence Chairman Devin Nunes, House Oversight Committee Chairman Trey Gowdy, Wray, and Director of National Intelligence Dan Coats.

Meanwhile, Senate Democratic Leader Chuck Schumer and House counterpart Nancy Pelosi, D-Calif., on Wednesday sent a letter to Rosenstein and Wray urging them to “reconsider” or at least conduct the meeting in a “bipartisan” fashion.

“For the President of the United States to pressure the Justice Department to reveal details and documents pertaining to an active investigation of the President’s campaign, for the purpose of denigrating it, is a gross and unprecedented abuse of power,” Schumer tweeted.