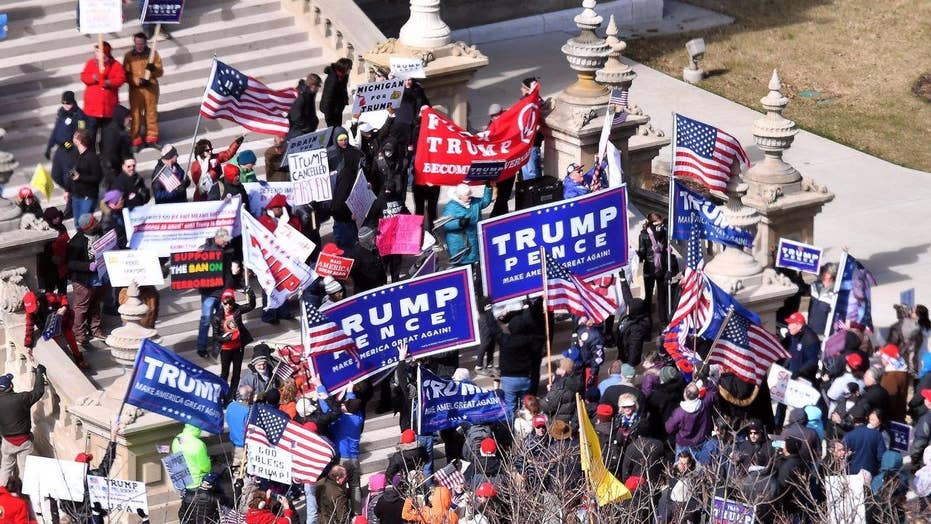 Strategy Room: Ellen Ratner and Kevin McCullough on the debate over the Republicans vision to replace ObamaCare

Raising a political problem as much as a financial one, newly released budget estimates show elderly Americans could be hit hard by premium hikes under Republicans' ObamaCare repeal bill -- affecting a key constituency for President Trump.

Under current law, they pay $1,700. But according to CBO projections, under the new bill, this group would have to pay almost $14,600—more than half their income.

Office of Management and Budget Director Mick Mulvaney pushed back Tuesday when asked about a Politico report suggesting the “clear losers” of the American Health Care Act would be Trump voters between the ages of 50 and 64, right below the Medicare eligibility age of 65.

“We have said this in the very beginning—we think the CBO is measuring against the wrong thing,” Mulvaney told "Fox & Friends." “To that same group of voters, go ask them. Go find the 55-year old person who is on ObamaCare right now and ask them if they can afford to go to the doctor—they will tell you, without exception, that they can’t and they know that our program will give that to them.”

“Older Americans need affordable health care services and prescriptions,” AARP Executive Vice President Nancy LeaMond said in a statement. “This plan goes in the opposite direction, increasing insurance premiums for older Americans and not doing anything to lower drug costs.”

The CBO figures show that in the long-term, the GOP bill would eventually lead to lower premiums overall. But the same study notes the new rules would allow insurance companies to charge older people considerably more.

This could pose an added complication for the Trump administration as it works with congressional allies to advance, and perhaps refine, the bill.

Trump last November carried voters between 45 and 64 years old, as well as those 65 and over, exit polling shows.

Broken down by income, the results were less clear. Fox News Exit Poll data showed those making less than $50,000, in the 45-64 age group, went for Hillary Clinton by a 12-point margin. But data also showed white, working-class voters in that age group went for Trump by a huge 37-point margin.

“The older a person is, the more costly their insurance is,” House Speaker Paul Ryan, R-Wisc., acknowledged to reporters last week.

While Ryan touted CBO findings about overall premium decreases and taxpayer savings, some still have cast doubt on the CBO's accuracy in general.

Research Fellow at the Foundation for Government Accountability Josh Archambault told Fox News the CBO data may be flawed, as it is considers only one phase of Republicans' plan.

“It’s too early to tell if this will happen—there are too many moving parts,” Archambault told Fox News. “Of course, we should be able to assess how different policies will affect different age groups, but you’ve got to look at the entire puzzle here, not just one piece.”

The CBO report also said that under the Republicans’ AHCA, 14 million Americans would drop or lose health insurance coverage by next year. Further, it estimated the plan would reduce federal deficits by $337 billion from 2017 to 2026.

While many in the administration, like Health and Human Services Secretary Tom Price, said they “disagree” with the results of the bipartisan study, Ryan called it an “encouraging” CBO score.

“It will lower premiums 10 percent; it stabilizes the market; it’s a $1.2 trillion spending cut, and $883 billion tax cut and $337 billion deficit reduction,” Ryan told Fox News. “So, this compared to the status quo, is far better.”