Trump: Homelessness is hurting our country and we are looking at it seriously

President Donald Trump on his approval numbers, taking on big tech and the homelessness epidemic on 'Tucker Carlson Tonight.'

President Trump sat down with Fox News host Tucker Carlson for an exclusive interview during his visit to Japan for the G20 summit and shared his plans to combat rising homelessness and mental illness in America.

During the interview, Trump told Carlson he is "looking at it very seriously" and said some people forced to live on the streets are "living in hell." 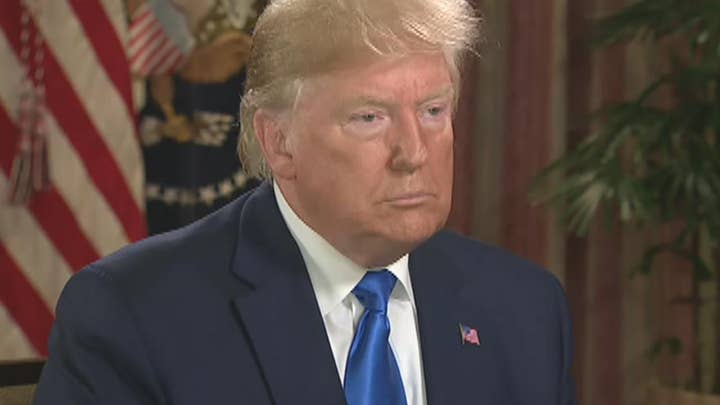 Trump continued, saying most people suffering from homelessness have an accompanying mental illness and sometimes don't realize they're living in their own filth. He also said the issue needs to be addressed before it starts affecting healthy working people as well.

"Some of them have mental problems where they don't even know they're living that way," he said. "In fact, perhaps they like living that way. They can't do that. We cannot ruin our cities.  And you have people that work in those cities.  They work in office buildings and to get into the building, they have to walk through a scene that nobody would have believed possible three years ago."

Trump blamed the liberal politicians for exacerbating the problem and said he's been fighting them on all fronts, including within the city limits of Washington, D.C.

"And this is the liberal establishment. This is what I'm fighting," he added. "They -- I don't know if they're afraid of votes. I don't know if they really believe that this should be taking place.  But it's a terrible thing that's taking place. And we may be -- you know, I had a situation when I first became president, we had certain areas of Washington, D.C. where that was starting to happen, and I ended it very quickly. 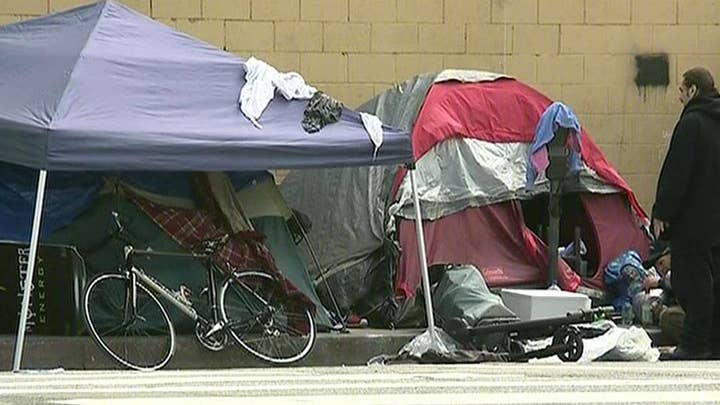 "When we have leaders of the world coming in to see the President of the United States and they're riding down a highway, they can't be looking at that. I really believe that it hurts our country.

"They can't be looking at scenes like you see in Los Angeles and San Francisco.  San Francisco... so we're looking at it very seriously.  We may intercede.  We may do something to get that whole thing cleaned up.  It's inappropriate."

Trump also said it shouldn't fall on the federal government to address the issue, but didn't give any indication that it would deter his administration from getting involved.

"We're really not very equipped as a government to be doing that kind of work," he told Carlson. "That's not really the kind of work that the government probably should be doing. We've never had this in our lives before in our country.  And it's not only those few cities, it's a couple of other ones." 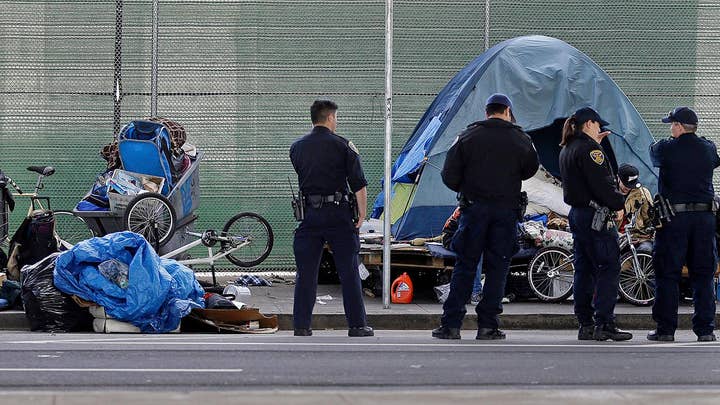 The president's comments came after figures released last month stated the number of homeless people in Los Angeles County jumped 12 percent over the past year, officials announced Tuesday, despite $619 million in government spending to help alleviate the problem.

The annual point-in-time count recorded nearly 59,000 homeless people countywide, with the largest number -- 36,000 -- coming from the city of Los Angeles. The Los Angeles Homeless Services Authority, a county agency which conducted the count, delivered its report to the Board of Supervisors at its Tuesday meeting.

The 2018 tally found a slight decrease in the homeless population at just over 53,000 people. Supervisor Janice Hahn called the new numbers "disheartening."

The count found a 24 percent increase in homeless youth, defined as people under 25, and a 7 percent jump in people 62 or older. An estimated 29 percent of people experiencing homelessness are mentally ill or have substance abuse issues, officials said.