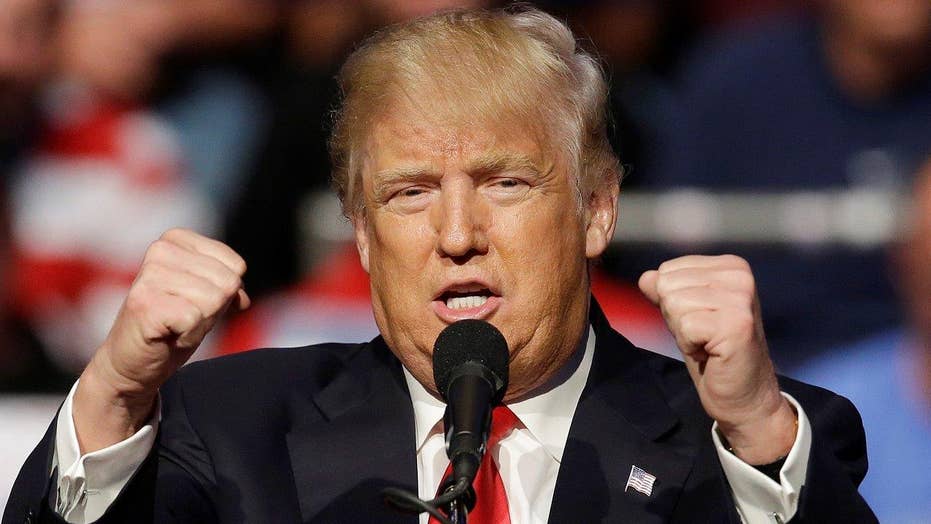 Donald Trump: I can win without Republican Party support

How will GOP presidential frontrunner's comments on party unity impact election? The debate continues on 'Outnumbered'

Donald Trump moved Monday to blunt the narrative that he would lose a general election to Hillary Clinton if he’s the Republican nominee, touting a new poll that showed him narrowly edging the Democratic presidential front-runner in a hypothetical match-up.

The Rasmussen Reports survey buoyed Trump’s campaign as he seeks to add to his hot streak on Tuesday in Indiana’s primary – a contest rival Ted Cruz is fighting hard to win.

Cruz has escalated his rhetoric as he courts Hoosier voters, even saying Sunday that Americans are “praying” for them. He warned against giving “in to evil.”

Asked Monday what he meant by that, the Texas senator said, “We are not a bitter, angry, petty, bigoted people. That is not America.” Spokesman Ron Nehring also invoked religious imagery, telling Fox News a Trump nomination would lead to a “wipeout of biblical proportions” for the GOP in November.

But the Rasmussen poll released Monday – even if it’s a flash-in-the-pan outlier – for the time being helps Trump counter persistent claims by Cruz, Ohio Gov. John Kasich and other detractors that he would surely lose to Clinton in November.

The poll showed Trump edging Clinton 41-39 percent in a hypothetical match-up, the first time he’s led their polling since last October. There is an asterisk in that finding: If voters are given the option of staying home, another recent Rasmussen survey showed Clinton and Trump tied.

Still, it was enough for Trump to herald the results on Twitter.

The poll of 1,000 likely voters was conducted April 27-28, and had a margin of error of 3 percentage points.

In Indiana itself, Trump continues to enjoy a roughly 9-point lead over Cruz, according to the RealClearPolitics average. On the Democratic side, Hillary Clinton has maintained a nearly 7-point average lead over Vermont Sen. Bernie Sanders.

Though Clinton, too, has been on a winning streak and is far closer to clinching the nomination than Trump, Sanders has – like Cruz – insisted he plans to keep on fighting.

“We intend to fight for every vote and every delegate remaining,” Sanders said at a press conference in Washington, D.C., on Sunday.

On Monday, Cruz similarly declared: "I am in for the distance, as long as we have a viable path to victory. I am competing until the end.”

Asked whether he still has a path to victory even if he loses on Tuesday, Cruz said: “Absolutely.”

Trump, to the contrary, said if he wins Tuesday, “it’s over.”

The pressure has only mounted on Cruz to do well in Indiana, amid reports that so-called “unbound” delegates in states like North Dakota who had been aligned with Cruz are growing uneasy amid Trump’s winning streak – and could consider flipping to Trump on the first ballot in Cleveland.

Nehring vowed Monday that Trump “will not get a majority on the first ballot.”