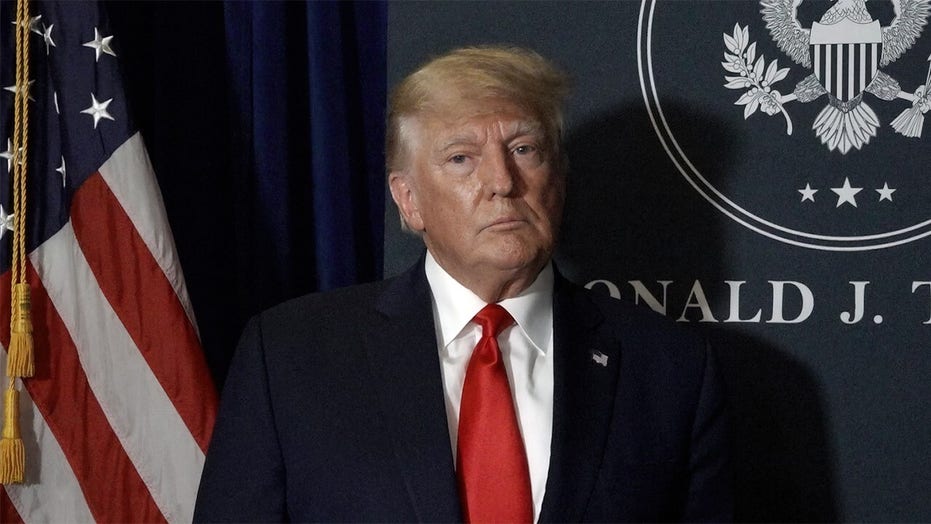 Trump speaks to Fox News Digital ahead of CPAC appearance

Former President Trump on Thursday filed a lawsuit against Hillary Clinton, the Democratic National Committee, and a number of other high-profile figures involved in the "nefarious" "conspiracy" to create a narrative that he and his 2016 presidential campaign were colluding with Russia. Trump's legal team told Fox News that they are suing for tens of millions of dollars in attorneys fees, damages exceeding $100 million, and "for our democracy."

In a 108-page lawsuit filed in the Southern District of Florida on Thursday, Trump and his legal team say "in the run up to the 2016 presidential election, Hillary Clinton and her cohorts orchestrated an unthinkable plot—one that shocks the conscience and is an affront to this nation’s democracy."

The suit alleges that "acting in concert, the defendants maliciously conspired to weave a false narrative that their Republican opponent Donald J. Trump was colluding with a hostile foreign sovereignty."

"The lawsuit filed today outlines the defendants’ nefarious plot to vilify Donald J. Trump by spreading lies to weave a false narrative that he was colluding with Russia," Alina Habba, attorney to Donald J. Trump, told Fox News. "For years, Hillary Clinton and her cohorts attempted to shield themselves from culpability by directing others to do their dirty work for them."

Habba told Fox News that this lawsuit "seeks to hold all parties accountable for their heinous acts and uphold the principles of our sacred democracy."

"This action exposes the remarkably devious tactics employed by the Defendants, who were so blinded by their political ambitions that they acted with callous disregard for the damage they have caused," Habba continued. "Clinton and her team weaponized the Federal Bureau of Investigation and other federal agencies by instigating an investigation they knew had no merit."

She added: "Among other things, they fabricated evidence, deceived federal authorities, and abused access to highly-sensitive databases."

Former US Secretary of State Hillary Clinton speaks during a press conference ahead of the screening of a movie "Hillary." (Abdulhamid Hosbas/Anadolu Agency via Getty Images )

Habba pointed to the multi-year investigation led by former Special Counsel Robert Mueller, which yielded no evidence of criminal conspiracy or coordination between the Trump campaign and Russian officials during the 2016 presidential election.

Habba said that investigation, and the original FBI probe, "fueled a media frenzy that poisoned our nation’s discourse for years to come."

"We will vigorously prosecute each and every named Defendant for their role in this conspiracy," Habba said.

The case has been brought against a number of individuals and entities involved in the origins of the Trump-Russia narrative.

Perkins Coie is the firm the DNC and the Clinton campaign funded the anti-Trump dossier through. The unverified anti-Trump dossier was authored by ex-British intelligence officer Christopher Steele, commissioned by opposition research firm Fusion GPS, and funded by the Democratic National Committee and Hillary Clinton’s presidential campaign through law firm Perkins Coie.

The suit also was brought against former Clinton attorneys Marc Elias – who was a partner for Perkins Coie – and Michael Sussmann, who has been indicted as part of Special Counsel John Durham's investigation into the origins of the Trump-Russia probe with making a false statement to the FBI. Sussmann has pleaded not guilty.

The indictment against Sussmann, says he told then-FBI General Counsel James Baker in September 2016, less than two months before the 2016 presidential election, that he was not doing work "for any client" when he requested and held a meeting in which he presented "purported data and 'white papers' that allegedly demonstrated a covert communications channel" between the Trump Organization and Alfa Bank, which has ties to the Kremlin.

President Donald Trump speaks during a news conference in the Rose Garden of the White House.

The suit also was brought against former FBI officials – Comey, McCabe, Strzok and Page – all of whom served on the FBI's original team investigating whether Trump and his 2016 presidential campaign were colluding with the Russians. The FBI's code name for that investigative team was "Crossfire Hurricane."

Former Attorney General Bill Barr appointed Durham, then the U.S. attorney from Connecticut, in 2019 to investigate the origins of the FBI’s original Russia probe, or Crossfire Hurricane, which began in July 2016, through the appointment of Special Counsel Robert Mueller in May 2017 shortly after Mueller completed his years-long investigation into whether Trump's campaign colluded or coordinated with the Russians to influence the 2016 presidential election.

Mueller's investigation found no evidence of illegal or criminal coordination between Trump or the Trump campaign and Russia in 2016.

Barr, in December 2020, before leaving the Trump administration, tapped Durham as special counsel to continue his investigation through the Biden administration.