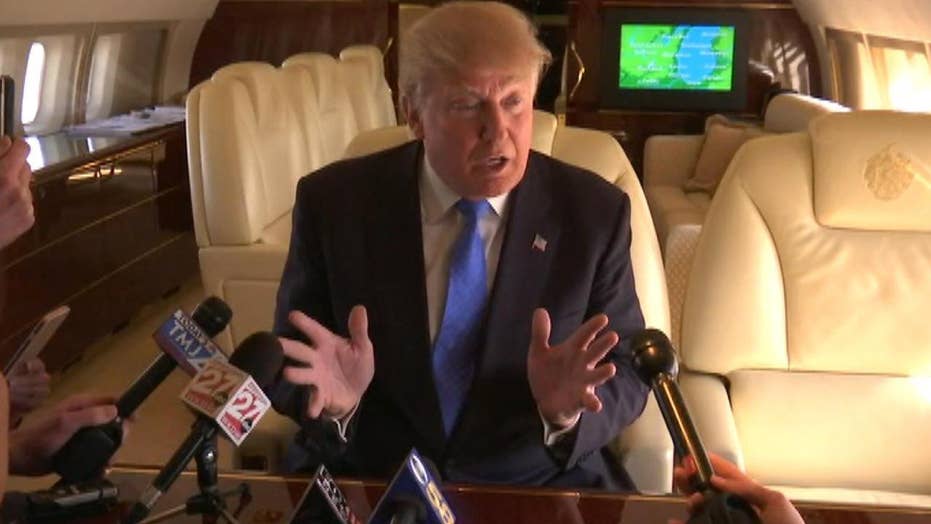 Donald Trump vowed Tuesday to stand by his campaign manager who was charged with misdemeanor battery over allegations he grabbed the arm of then-Breitbart reporter Michelle Fields, as the aide maintained his innocence.

The Republican front-runner told Fox News’ Sean Hannity in an exclusive interview he saw “virtually nothing” in the surveillance tapes of the incident.

“I’m very glad that we were able to produce the tape because I don’t see anything.  I see virtually nothing,” he told Hannity. “And we’re going to destroy a man’s life over this?”

The incident occurred after a March 8 press conference at the Trump National Golf Club in Jupiter, Fla., where Corey Lewandowski was accused by Fields of grabbing her arm as she asked the Republican front-runner a question.

Lewandowski initially denied the incident had taken place, telling Fields over Twitter he had never even met her. Trump also backed Lewandowski, telling reporters a few days later that "everybody said nothing happened. Perhaps she made the story up, I think that’s what happened.”

However, the Jupiter Police Department obtained video from the ballroom that it says parallels Fields' version of events, and subsequently charged Lewandowski. Trump said a surveillance system he had set up in the ballroom captured the incident.

“If I had not have produced the tape, it would have been much worse,” Trump told Hannity. “Because look at the statement she made, I had to write it down, ‘forcefully thrown reporters to the ground, campaign managers aren’t supposed to forcefully throw campaign managers to the ground’.  What ground?  I mean, if you look at her face, her expression doesn’t even change.”

Earlier on Tuesday, while on his campaign plane, Trump said that Fields was seen running up and grabbing him after a news conference which he claimed she was "never supposed to do," and that Lewandowski was trying to block Fields from "grabbing and asking questions."

“She grabbed me and she had something in her hand, I don’t know what it was,” Trump told Hannity. “It looked like it could have been a pen. But you know, from the standpoint of where we are, who knows what it is.  So she grabs me and then he maybe brushed her aside, and we’re going to destroy his life for that?  I don’t think so.”

He called the situation "very unfair" to Lewandowski, one of his closest advisers. He says he hopes the matter doesn't change Lewandowski's role on his campaign.

“I think this was very unjust, nobody called me, nobody interviewed me,” Trump said “I wasn’t interviewed by the police.”

Cruz said during a town hall Tuesday night that if Lewandowski was his campaign manage, he would ask him to resign.

"It shouldn't be complicated," he said. "The members of the campaign staff shouldn't be physically assaulting the press."

Kasich said at the CNN town hall event he would fire Lewandowski as well.