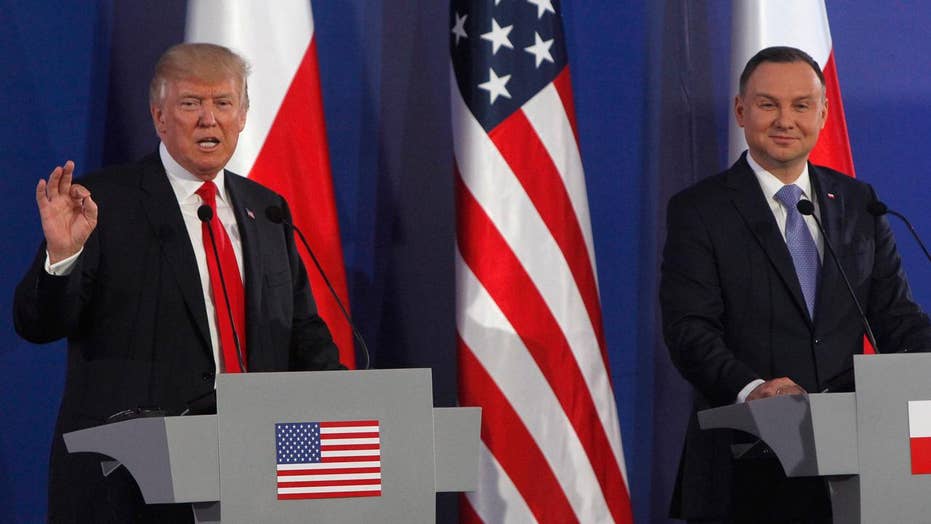 Former CIA analyst Fred Fleitz and Former advisor to the U.S. and NATO Andrew Peek give their analysis

A day after CNN’s president complained President Trump was trying to “bully” the network, Trump on Thursday again lambasted the channel as being “dishonest” and “fake news” -- and suggested they took his infamous wrestling GIF "too seriously."

Speaking during a joint news conference with President Andrzej Duda in Poland, Trump addressed the network’s latest controversy, after CNN this week appeared to threaten to expose the Reddit user who created a GIF of Trump wrestling a person with a CNN logo photoshopped over his head.

"I think what CNN did was unfortunate for them, as you know now they have some pretty serious problems,” Trump said. “They have been fake news for a long time. They have been covering me in a very, very dishonest way.”

DID CNN COMMIT A CRIME?

Trump had tweeted a version of the wrestling GIF last weekend, drawing bipartisan criticism. But on Thursday, he described CNN's response as going too far.

He added: “I will say that CNN has really taken it too seriously, and I think they’ve hurt themselves very badly. Very, very badly.”

CNN has been under fire since Tuesday for appearing to warn that it could name the Reddit user behind the GIF if he reneged on his apology.

CNN, however, has adamantly defended its handling of the story, issuing a statement Wednesday saying the network did not publish the user’s name out of concern for his safety -- adding, "Any assertion that the network blackmailed or coerced him is false."

In the statement, CNN said the team published the line in question to be “transparent that there was no deal.”

Trump also lobbed a barb at NBC on Thursday.

"NBC is equally as bad, despite the fact that I made them a fortune with 'The Apprentice,' but they forgot that," said Trump, an ex-reality show host for the network.

But despite Trump taking questions from the press for the first time in nearly a month, the press conference wasn’t good enough for at least one reporter – who happened to be from CNN.

Jim Acosta, who has regularly sparred with Trump and White House Press Secretary Sean Spicer, tweeted: “Trump finally held a news conference overseas. But he took a question from a friendly reporter and then attacked CNN as ‘fake news.’”

Acosta added in one of several follow-up tweets: “Isn't it a ‘fake news conference’ to take a question from a reporter who is essentially an ally of the White House?”

Trump took questions from MSNBC – which could definitely not be cast as a Trump ally – and The Daily Mail, and Acosta appeared to be alluding to the latter. U.S. political editor David Martosko was considered for a communications job last month but pulled out of consideration.

But Acosta's complaints drew criticism from Republicans, who noted the Obama administration enjoyed a friendly press.

“So by that logic, was every news conference for the last 8 years #fakenews Jim?” Donald Trump Jr. tweeted.

Former Bush White House Press Secretary Ari Fleischer added, “Jim - care to guess how many questions I took from reporters who went on to join the Obama WH??”

Trump’s continued criticism of CNN came just hours after a New York Times article in which CNN president Jeff Zucker castigated the president for his treatment of the network.

“He’s trying to bully us, and we’re not going to let him intimidate us,” Zucker said. “You can’t lose your confidence and let that change the way you conduct yourselves.”