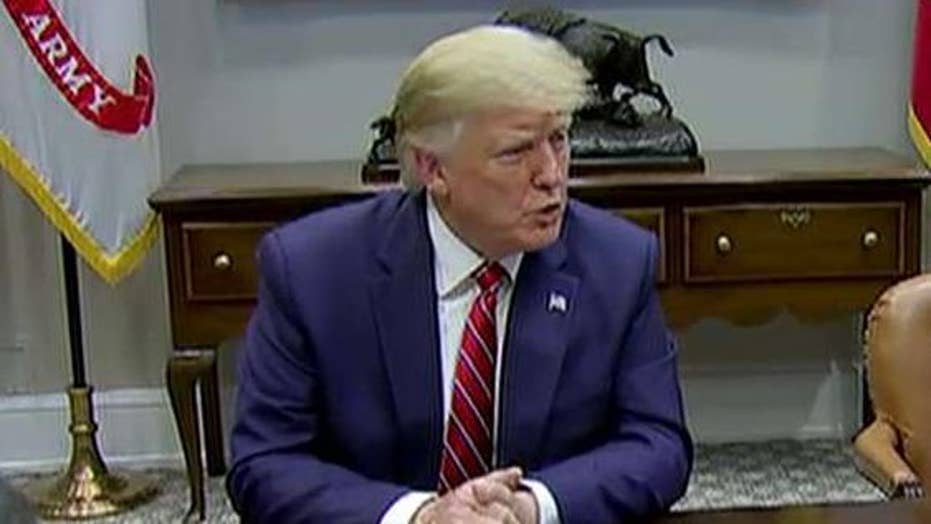 President Trump reflected on his relationship with his brother Fred Trump Jr. -- who died in 1981 as a result of alcoholism -- and the lasting effect Fred's drinking had on him, saying in an interview he regrets the "pressure" put on his sibling.

Trump told The Washington Post that seeing his brother succumb to alcoholism has shaped his perspective as his administration attempts to take on addictions, be they alcohol-related or opioids.

TRUMP DONATES $100G FROM HIS SALARY TO ALCOHOLISM RESEARCH

The president also lamented how he treated his older brother when it came to the family business. While Donald Trump was eager to stand beside their father, Fred Jr. dreamed of being an airline pilot. The president fears the pressure his brother faced may have led to his drinking problem.

"I do regret having put pressure on him,” Trump said, recognizing that taking over their father's business “was just something he was never going to want."

Looking back, the president said, "I think the mistake that we made was we assumed that everybody would like it. That would be the biggest mistake. . . . There was sort of a double pressure put on him.”

Trump made a similar observation during a 1990 CBS interview.

"Perhaps it was my fault and perhaps my father’s fault for egging him on to business because he wasn’t good at it, because he didn’t like the business," Trump said at the time.

Fred Jr. eventually reached his goal of becoming a pilot for TWA, but it was short-lived. Bob Kavula, vice president of the TWA Retired Pilots Association, told the Post that Trump was "terminated because he had a drinking problem."

Decades later, the president looked back on the effect alcoholism had on Fred Jr.'s health. Fred died of a heart attack at the age of 42, but previously spent time in the hospital, having had part of his stomach removed.

"He was so handsome, and I saw what alcohol did to him even physically . . . and that had an impact on me, too," President Trump said.

That impact has influenced not only Trump's goals for his administration but his personal lifestyle. The president is known for his aversion to alcohol, and cites a fear of being genetically susceptible to addiction.