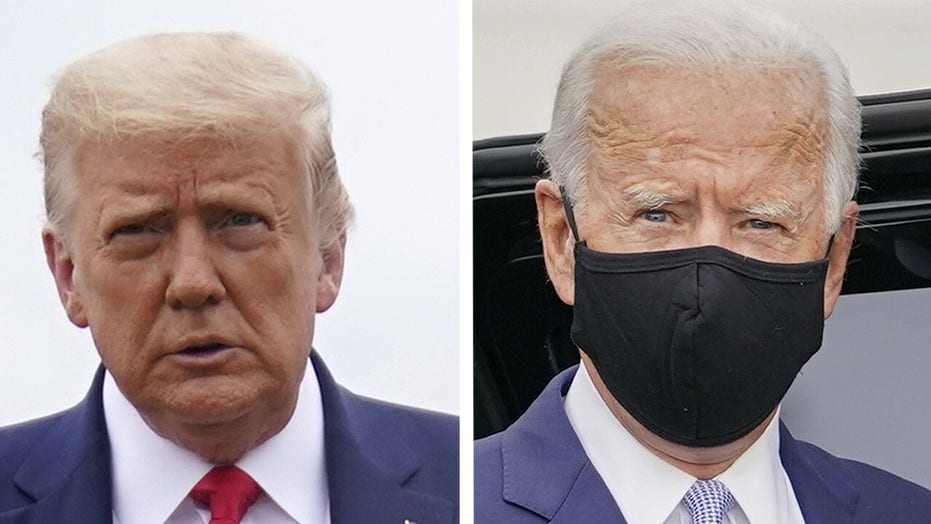 Trump campaign forms 'coalition' of lawyers if the results are contested, Biden campaign builds its own legal war room; reaction and analysis on 'The Five.'

President Trump pushed back at an undecided voter who claimed he "took his foot off the gas" on coronavirus mitigation, and at another questioner who said he "downplayed" the severity of the coronavirus in the early days of the pandemic.

Paul Tubiana, a health researcher from Bethlehem in Pennsylvania's Lehigh Valley, said during the ABC News town hall event in Philadelphia on Tuesday that he voted for the incumbent president in 2016 and was supportive of him until he noticed a change in the White House's response a few months ago.

"I'm conservative, pro-life, and diabetic," he told Trump, adding that he has had to dodge pedestrians who refuse to wear facemasks or social distance, despite guidance from the Pennsylvania Department of Health.

"I thought you were doing a good job with the pandemic response until about May 1 -- then you took your foot off the gas pedal. Why did you throw vulnerable people like me under the bus?" he asked.

"We really didn't, Paul, we worked really hard on the pandemic," Trump said. "It came off from China, they never should've let it happen."

Trump recounted his administration's work toward producing ventilators and personal protective equipment, accusing President Obama of leaving "the cupboards bare" when he left office in 2017.

"If you want to know the truth, the previous administration would have taken perhaps years to have a vaccine because of the FDA and all the approvals," he added.

Trump went on to ask Trubiana if he was from New York City, and the man replied that he was born there, but has lived in his current community 80 miles west of there for nearly two decades.

Trump said that when it came to Trubiana's hometown, he provided city and state residents with a hospital ship and helped the local authorities establish a military field hospital in the Jacob K. Javits Convention Center, regretting aloud that they weren't used as heavily as they could have been.

He then pulled a small device from his suit pocket and said it was a new groundbreaking test produced by Abbott Laboratories that had, in his words, literally just been released.

The president described the small cardboard test in his hand as 'very simple and very accurate."

Later in the forum, Ajani Powell, a student from Pittsburgh, asked Trump why he would "downplay a pandemic that is known to disproportionately harm low-income families and minority communities?” -- in an apparent reference to comments the commander-in-chief made to former Washington Post reporter Bob Woodward.

Trump disagreed with the assertion, responding that he did not "downplay" the virus.

He pointed to his ban on travel to and from China in early 2020 and added that he later enacted a similar restriction against Europe.

"[W]e would’ve lost thousands of more people had I not put the ban on... So that was called action, not with the mouth but in actual fact..."

The president added that, in contrast, the top officeholder in the Democratic Party, House Speaker Nancy Pelosi, D-Calif., was inviting people to join other community members in San Francisco's Chinatown in late February -- weeks after the White House took its first mitigation steps.

"It is going to disappear, George, we're not going to have studios like this where there are all of this empty space."

In response to the overall criticism that he is misleading the public on the severity of the virus, the president pointed to British Prime Minister Winston Churchill speaking from London rooftops amid German Nazi bombardments.

"[Churchill was saying] you're going to be safe, be calm don't panic," Trump recalled. "I guess you could say that's not so honest -- but it's great leadership."