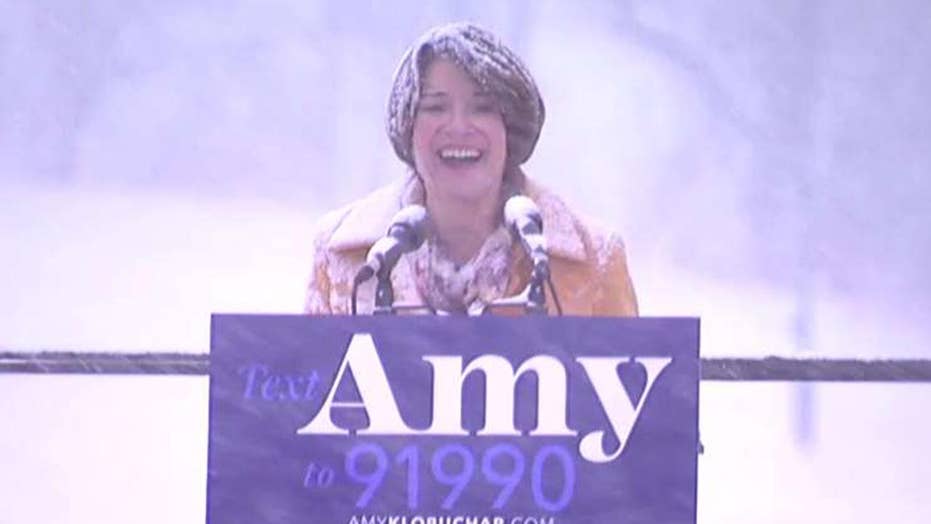 Sen. Klobuchar announces her 2020 bid for the Democratic presidential nomination

President Trump poked fun at Sen. Amy Klobuchar, D-Minn., Sunday for vowing to tackle climate change as she kicked off her 2020 presidential campaign in a snowy, freezing Minneapolis park.

"Well, it happened again," Trump wrote on Twitter Sunday evening. "Amy Klobuchar announced that she is running for President, talking proudly of fighting global warming while standing in a virtual blizzard of snow, ice and freezing temperatures. Bad timing. By the end of her speech she looked like a Snowman(woman)!"

Klobuchar previously endorsed the so-called "Green New Deal," a massive Democratic legislative program that promises to combat climate change, in part through a massive influx in spending. Republicans have decried it as unrealistic.

In her announcement on Sunday, Klobuchar vowed to rejoin the 2015 Paris Climate agreement. The Trump administration had pulled out of it in 2017.

"The people are on our side when it comes to climate change," Klobuchar told supporters. "Why? Because like you and I, they believe in science. That's why in the first 100 days of my administration, I will reinstate the [Obama-era] clean power rules and the gas mileage standards and put forth sweeping legislation to invest in green jobs and infrastructure."

Later Sunday evening, Klobuchar answered Trump's tweet by saying she was "[l]ooking forward to debating you about climate change (and many other issues). And I wonder how your hair would fare in a blizzard?" The senator included a fundraising appeal and a link to her campaign website.

Trump has used his Twitter account to respond quickly to his would-be White House challengers. On Saturday, after Massachusetts Sen. Elizabeth Warren formally launched her bid for the presidency, the president queried whether she would run "as our first Native American presidential candidate, or has she decided that after 32 years, this is not playing so well anymore?

"See you on the campaign TRAIL, Liz!" Trump added in a further shot at Warren's disputed claim to have Native American ancestry.