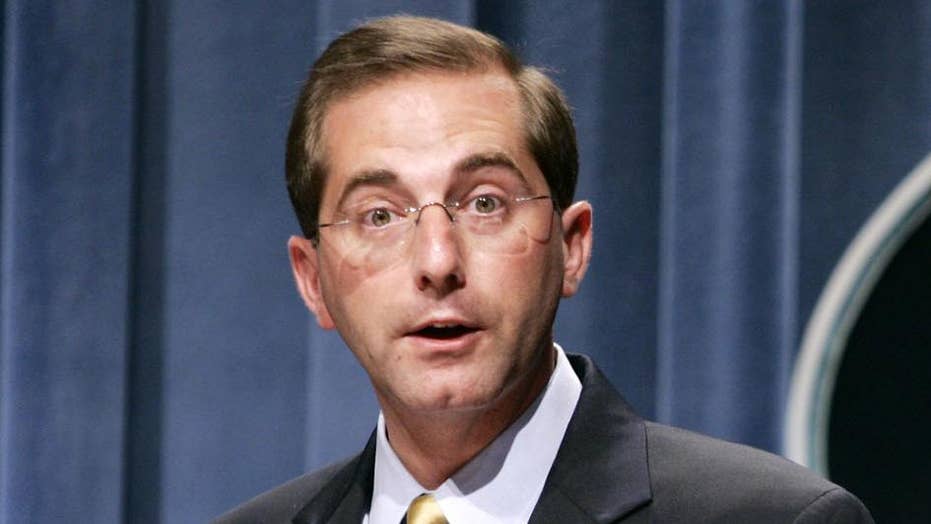 Dr. Marc Siegel breaks down the background and credentials of President Trump's pick.

President Trump announced that he will nominate Alex Azar as his Health and Human Services secretary, replacing Tom Price who was forced to resign in September amid a scandal over travel expenses.

“Happy to announce, I am nominating Alex Azar to be the next HHS Secretary. He will be a star for better healthcare and lower drug prices!” the president tweeted Monday from the Philippines.

Trump has reportedly been leaning toward an Azar nomination, as he is a veteran of the agency.

Azar, served at HHS throughout the Bush administration, beginning in 2001 as general counsel, and concluding as deputy HHS secretary until 2007. Until January, Azar worked as a senior executive at Eli Lilly. He also formed a health care strategic consulting firm called Seraphim Strategies.

According to a senior administration official, Azar is a twice unopposed, Senate-confirmed nominee—both for his role as general counsel and deputy secretary under President George W. Bush. The official told Fox News that Azar “knows the agency” and “can hit the ground running.”

The official told Fox News Azar has been a public leader in efforts to reduce drug prices—something Trump has been committed to accomplishing.

If confirmed, Azar would replace Trump’s first HHS secretary, Tom Price, who was forced to resign after criticism mounted over his private plane trips.

Price, a physician and former Republican congressman from Georgia, offered his resignation in late September, after reports revealed he flew on charters to visit community health centers in New Hampshire and Pennsylvania. Politico reported that he also took a government-funded jet in August to St. Simons Island, a Georgia resort where his family owns land. The outlet also reported that he took military aircraft for official trips to Africa, Europe and Asia, costing taxpayers more than $500,000.

Senior department sources told Fox News that Price would repay $51,887.31, though that repayment only represents a fraction of the total cost.