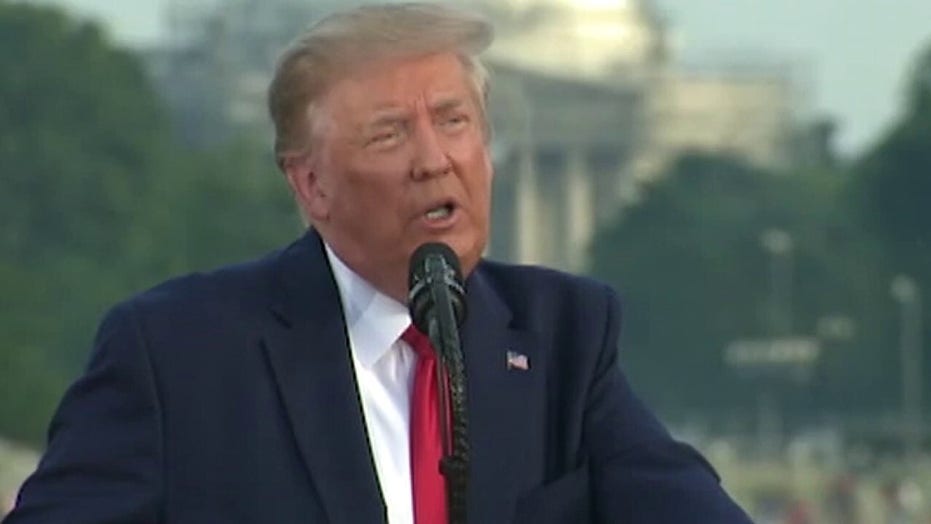 The Trump campaign announces that the next rally will be July 11 in Portsmouth, New Hampshire.

President Trump’s re-election campaign announced Sunday that the president will headline an outdoor rally in the battleground state of New Hampshire next weekend, just his second rally since the coronavirus pandemic swept across the nation in March.

Campaign staffers said the rally will be held next Saturday, July 11, at the Portsmouth International Airport in Portsmouth, New Hampshire.

The president drew smaller-than-expected crowds at his first rally, which took place in Tulsa, Okla., on June 20.

President Trump arriving on stage to speak at the campaign rally in Tulsa on June 20. (AP Photo/Evan Vucci, File)

The Trump campaign had touted that 1 million people had requested tickets for the Oklahoma rally. Ultimately, large portions of the upper deck of the 19,000-capacity arena were empty as the president addressed the crowd.

The Trump campaign pushed back on suggestions that he failed to draw a big enough crowd, noting that the event attracted over 4 million viewers “across all of the campaign’s digital media channels” and spotlighting that Fox News -- which carried the event live -- had its best Saturday night ratings in its nearly 25-year history.

The coronavirus outbreak has seen less of an impact on New Hampshire than in the more populated U.S. states. Rockingham County, which includes Portsmouth, has reported fewer than 1,500 confirmed cases and 90 deaths overall, generally with fewer than 10 new cases daily.

Public health officials have discouraged large crowds in extremely close contact amid the pandemic. The Trump campaign, in announcing next weekend’s rally in New Hampshire, noted that “there will be ample access to hand sanitizer and all attendees will be provided a face mask that they are strongly encouraged to wear.”

Trump campaign national press secretary Hogan Gidley added, “We look forward to so many freedom-loving patriots coming to the rally and celebrating America, the greatest country in the history of the world.”

New Hampshire has held a special place in the president’s political history. After narrowly losing the Iowa caucuses four years ago, Trump won the New Hampshire primary in a landslide, launching him toward the GOP presidential nomination and, eventually, the White House.

Besides holding the first-in-the-nation presidential primary, New Hampshire for a generation has been a battleground state in the general election. Trump narrowly lost the state’s four electoral votes four years ago by fewer than 3,000 votes to Democrat Hillary Clinton.

The president was last in New Hampshire on Feb. 10, for a rally on the eve of the presidential primary. The most recent public opinion polls in the state indicate Democrat Joe Biden holding an upper single-digit lead over the president.