President Trump, in an Election Day appearance on "Fox & Friends," expressed confidence in his chances of securing reelection, saying he believes he has a "solid chance of winning" another four years in the White House while insisting he won't "play games" in declaring victory.

The president made his last-minute pitch to viewers Tuesday in a final push as Americans headed to the polls.

“Well, we feel very good," Trump said by phone, pointing to the large crowds at recent events in Michigan as a positive sign. He later stated that he believes he has a "solid chance of winning." 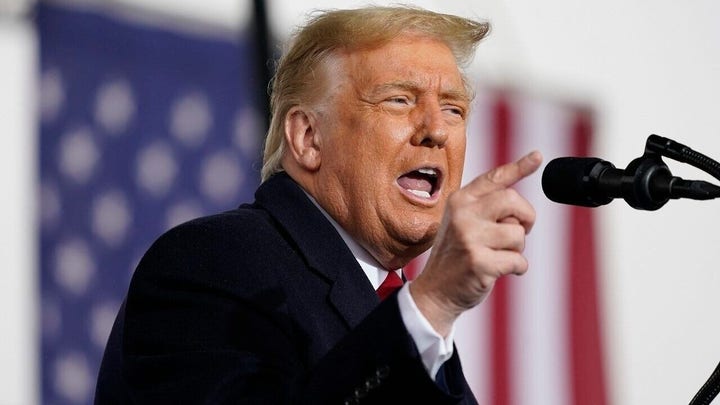 Trump has tirelessly campaigned in the final stretch leading up to Nov. 3, having held multiple rallies in the same day. Meanwhile, his Democratic opponent, former Vice President Joe Biden, is making Election Day appearances in the battleground state of Pennsylvania on Tuesday. (Campaigning on Monday in Pittsburgh, Biden also sounded confident: "Folks, I have a feeling we're coming together for a big win tomorrow.)

During his "Fox and Friends" appearance, the president also delivered a message to undecided voters, focusing on the economic progress that the country made before the coronavirus pandemic.

"We built the greatest economy in the world. It was horribly interrupted by something that should have never happened," Trump said.

Trump also defended the decision to shut down the economy earlier this year, pointing to the lives that were saved as a result. He offered optimism, for the future, saying that going forward "we build it up again and we’re doing it at a record clip.”

WHEN DO POLLS CLOSE IN EACH STATE?

The president also discussed his opponent, warning that if Biden wins he will not be able to keep the far-left wing of his party from taking over. He specifically commented on a video conference call between Sen. Bernie Sanders, I-Vt.; and Reps. Alexandria Ocasio-Cortez, D-N.Y.; Ilhan Omar, D-Minn.; Rashida Tlaib, D-Mich.; and Ayanna Pressley, D-Mass. During the conversation, Sanders said that Biden could be the most progressive president the country has ever had.

"Joe’s going to have a hard time, he’s not going to be able to handle them," Trump said. Later on, he predicted that if Biden tried to exert control over his party, he could find himself out of a job.

"Joe Biden will never call the shots and if he does he’s not going to be there very long," Trump said.

Cities across the country are bracing for unrest in response to the election's outcome, and Trump blamed Democrats for the danger, saying that people on the left have become "radicalized" and their leaders are not keeping them under control.

“I think it’s very sad and part of the reason is it’ll all be in Democrat cities, Democrat-run cities,” Trump said, mentioning Chicago, New York City, Baltimore, and others. “And that’s because of weak leadership.”

VOTING AMID CORONAVIRUSL TIPS TO STAY SAFE ON ELECTION DAY

When asked what would happen if Biden wins and Democrats take control of the Senate while maintaining their House majority, Trump gave a dire warning.

"Our country could never be the same country if they win," he said, specifically referring to Democrats' threats to change Senate rules and expand the Supreme Court so they could add liberal justices.

"If they pack the courts that will be a terrible thing," Trump said.

This year is expected to see a record turnout of voters, as nearly 100 million people have already cast their ballots early. Still, it is entirely possible that the country will not have a result when polls close Tuesday night, as several key battleground states are allowing mailed ballots to be counted as they continue to be delivered over the next several days.

Trump has expressed frustration over this, and has repeatedly claimed that Americans should be able to know the result of their election on Election Day. It had been reported that if he holds a clear lead based on Tuesday night's returns, he would declare victory, but he refuted that, stating that it was a "false report."

That subject came up again during Tuesday morning's interview. Again, Trump rejected the idea of a premature declaration, saying he would make an announcement "only when there's victory," and that there is "no reason to play games."