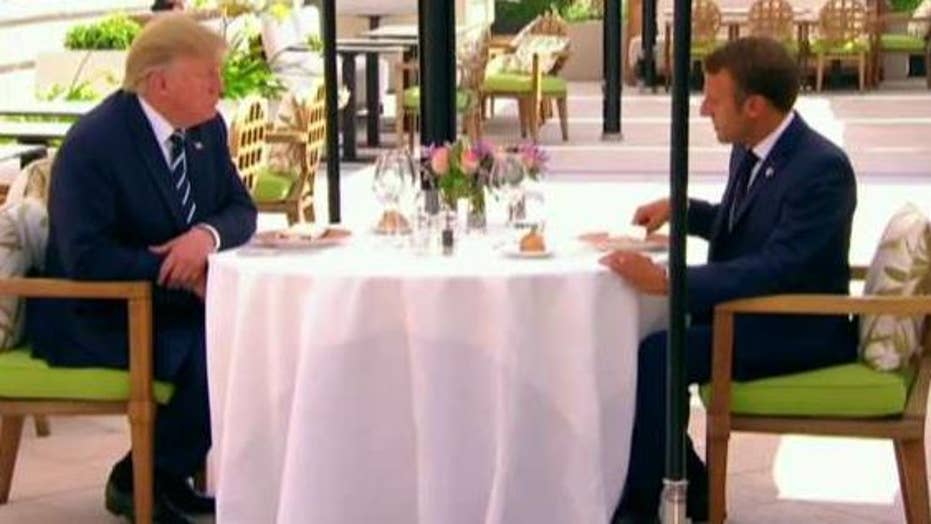 President Trump says that his relationship with the French president is still good; John Roberts reports from Saint-Jean-de-Luz, France.

President Trump on Saturday sought to smooth over his prickly relationship with French President Emmanuel Macron as he arrived in France for the G-7 summit – telling reporters he loves French wine, hours after threatening to slap tariffs on the export.

“I love French wine,” the president told reporters sitting opposite Macron for a lunch after his arrival in Biarritz.

“We actually have a lot in common, Emmanuel and I,” he said. “We’ve been friends for a long time and every once in a while we go at it just a little bit, not very much, but we get along very well, we have a great relationship, I think I can say a special relationship.”

Hours earlier, before jetting off from Washington, Trump had threatened to impose tariffs on French wine over France’s digital services tax that would hit U.S. technology companies.

Trump said that while he was not a “big fan” of tech companies, “those are great American companies and frankly I don’t want France going out and taxing our companies.”

U.S President Donald Trump sits for lunch with French President Emmanuel Macron, right, at the Hotel du Palais in Biarritz, south-west France, Saturday Aug. 24, 2019. Efforts to salvage consensus among the Group of Seven rich democracies on the economy, trade and environment were fraying around the edges even as leaders were arriving before their three-day summit in southern France.  (AP)

Trump’s relationship with Macron has yo-yo’d dramatically. In April last year, the relationship hit a peak when the French premier visited Washington, held hands with the man he called “cher Donald” and even had the American president brush dandruff off his shoulder.

But that relationship soured, with Macron becoming increasingly critical of his American ally. After Macron suggested building a European army to protect itself from China, Russia, and the U.S., Trump responded by hitting Macron for his low approval ratings – and suggesting that U.S. wine is on par with French grape.

Trump faces a tricky summit with G-7 leaders and is expected to promote a pro-growth message and talk about what he has done in terms of cutting taxes and regulation at home. Trump will urge the countries to reform the World Trade Organization (WTO) as he believes that China has been gaming the system and that countries need to push back against it.

Trump arrived on Air Force One after changing airplanes in Bordeaux, on account of the shorter runway in Biarritz. His motorcade passed through barricaded streets on his way to the heavily secured summit site, as some residents looked on from windows overhead. 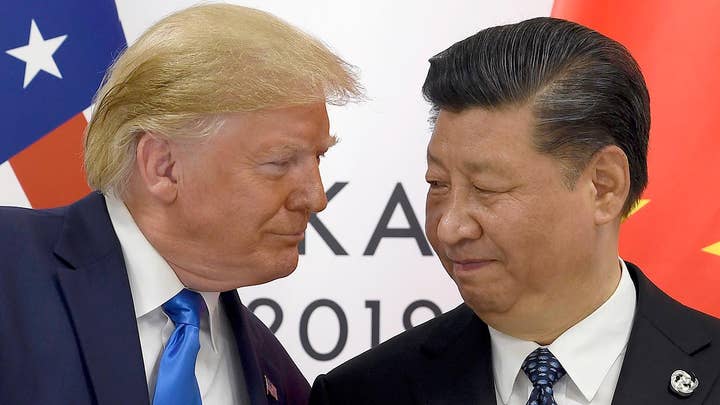 Leaders are facing the prospect of a global economic downturn amid an escalating trade war between the U.S. and China. The U.S. has said it plans to impose 10 percent tariffs on $300 billion of Chinese goods in two steps, on Sept. 1 and Dec. 15. China responded Friday with new tariffs on $75 billion of U.S. products in retaliation, deepening a conflict over trade and technology that threatens to tip a weakening global economy into a recession.

On Friday evening, Trump said products coming from China that were slated to be hit with a 10 percent tariff on Sept. 1 will now face a 15 percent tariff. Trump also said goods and products currently being taxed at 25 percent will be taxed at 30 percent starting Oct. 1

CHRIS WALLACE: G-7 COULD BE IN FOR A 'BUMPY RIDE' AFTER WEEK OF VOLATILE MARKETS

Trump also ordered U.S. companies to look for alternatives other than China with whom do business.

“Our Country has lost, stupidly, Trillions of Dollars with China over many years,” he tweeted. “They have stolen our Intellectual Property at a rate of Hundreds of Billions of Dollars a year, & they want to continue. I won’t let that happen!”

In addition to the economy, Trump said he wants to talk to other leaders about making sure Iran does not gain access to nuclear weapons. Trump withdrew the U.S. from the Iran nuclear deal last year – a move opposed by European leaders.

Trump is used to gatherings of world leaders that are frequently frosty events as he pushes his “America First” vision abroad. He has feuded with not only Macron in the past, but also Canadian Prime Minister Justin Trudeau and German Chancellor Angela Merkel – both who will be in attendance at the summit. At last year’s summit, he withdrew the U.S. signature from the statement of principles that all seven nations had agreed to.

On Saturday, he is likely to receive at least one warm welcome from new British Prime Minister Boris Johnson. The pair have spoken warmly about each other and share similar visions on the subject of Britain’s departure from the European Union.