China announces tariff hike on $75 billion of US goods

President Trump announced on Twitter Friday that his administration will retaliate against China by raising tariffs on imports from the Asian nation amid a bitter trade war between the two countries.

"For many years China (and many other countries) has been taking advantage of the United States on Trade, Intellectual Property Theft, and much more. Our Country has been losing HUNDREDS OF BILLIONS OF DOLLARS a year to China, with no end in sight," Trump tweeted. "Sadly, past Administrations have allowed China to get so far ahead of Fair and Balanced Trade that it has become a great burden to the American Taxpayer. As President, I can no longer allow this to happen!"

The move came hours after Beijing said it would hike tariffs on $75 billion in U.S. imports, escalating a conflict over trade and technology that threatens to tip a fragile global economy into a recession.

Economic groups were aghast at the new tariffs, which were announced an hour after the Dow Jones Industrial Average closed down more than 623 points following an earlier presidential broadside against the Chinese.

"It's impossible for businesses to plan for the future in this type of environment," National Retail Federation Senior Vice President of Government Relations David French said in a statement. "The administration's approach clearly isn't working, and the answer isn't more taxes on American businesses and consumers. Where does this end?"

Earlier in the day, Trump tweeted that the U.S. has "stupidly" lost trillions of dollars to China and accused Beijing of stealing "our Intellectual Property at a rate of Hundreds of Billions of Dollars a year, & they want to continue.

"I won’t let that happen!" wrote Trump, who also said he "hereby ordered" American companies to seek alternatives to doing business in China.

The president also raged against Federal Reserve chairman Jerome Powell for his continued refusal to cut interest rates, at one point saying: "My only question is, who is our bigger enemy, Jay Powel (sic) or [China's] Chairman Xi [Jinping]?"

That outburst came after Powell, speaking to central bankers in Jackson Hole, Wyo., gave vague assurances that the Fed "will act as appropriate" to sustain the nation's economic expansion. While the phrasing was widely seen as meaning interest rate cuts, he offered no hint of whether or how many reductions might be coming the rest of the year. 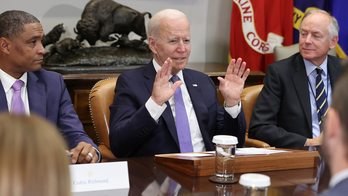