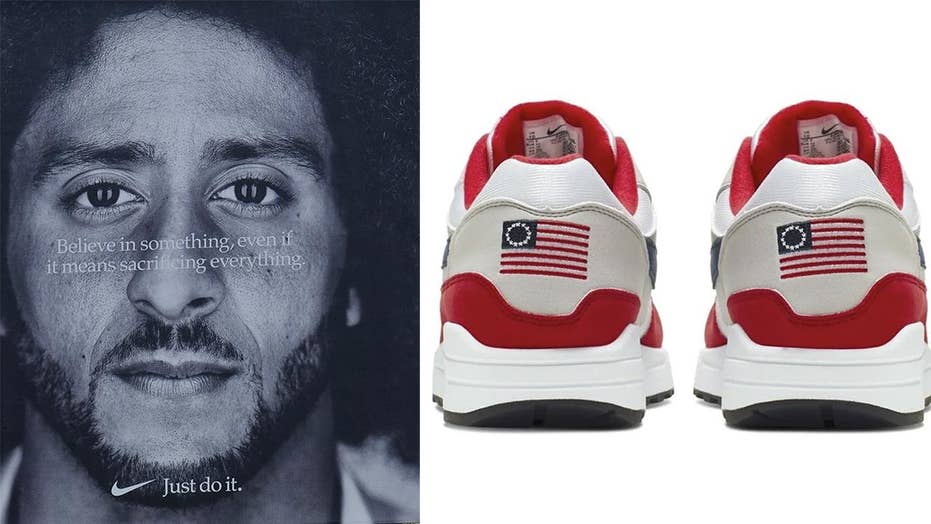 Republican leaders are hitting back at Nike for scrapping a sneaker release that featured a Betsy Ross flag; Garrett Tenney reports from Washington, D.C. on the fallout.

Donald Trump Jr. had a scathing critique of the athletic company Nike after it decided to pull a sneaker bearing a flag used during the American Revolution.

Instead of using that older version of the American flag, Trump Jr. suggested Nike should unveil a communist-style shoe looking similar to the hammer-and-sickle logo of the former Soviet Union.

"If the Betsy Ross Flag, the flag of the American Revolution, is too offensive for Nike to commemorate The 4th of July maybe Nike should go with this... seems to be more in line with their views," Trump Jr. tweeted on Wednesday.

His attack came as Nike faced mounting criticism over its decision to halt the release of a shoe that had the Betsy Ross flag because it could "unintentionally offend" people.

"NIKE made the decision to halt distribution of the Air Max 1 Quick Strike Fourth of July based on concerns that it could unintentionally offend and detract from the nation’s patriotic holiday," the company said in a statement sent to Fox News on Tuesday.

Ex-NFL quarterback Colin Kaepernick reportedly played a role in Nike’s decision to pull the sneakers after they'd been sent to retailers. Sources told The Wall Street Journal that Kaepernick said he felt the use of the Betsy Ross flag was offensive, with slavery connotations.

Citing people familiar with the matter, the paper's report stated, “After images of the shoe were posted online, Mr. Kaepernick, a Nike endorser, reached out to company officials saying that he and others felt the Betsy Ross flag is an offensive symbol because of its connection to an era of slavery.”

The company also received criticism from members of Congress like Sen. Ted Cruz, R-Texas, who pledged not to buy their products after the incident.

"They’ve now decided their shoes represent snide disdain for the American flag. Since they don’t want my business anymore, I won’t buy any more. Can anyone recommend a good sneaker co that’s not so woke?" Cruz asked in a tweet on Tuesday.