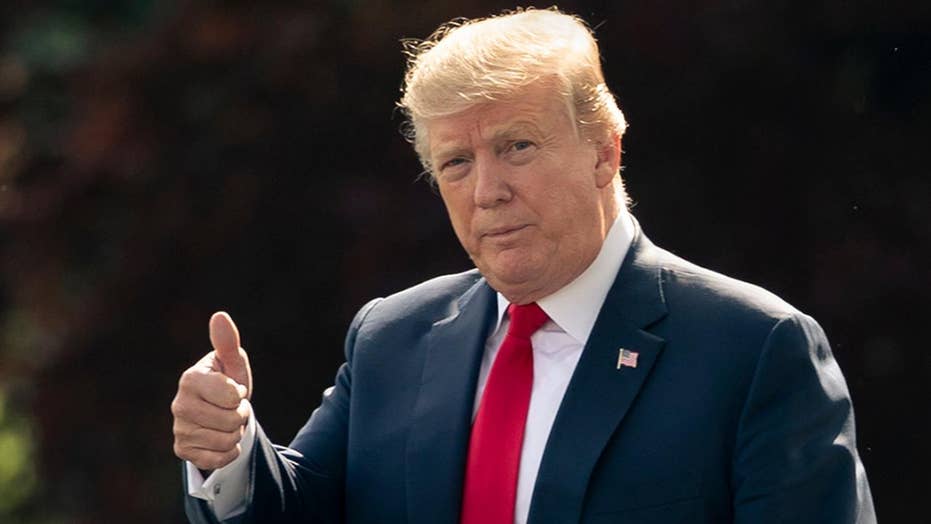 President Trump on Saturday took yet more shots at "highly conflicted" Special Counsel Robert Mueller’s Russia report, as well as the "fake news" medias coverage of its findings -- while declaring that “The Russia Hoax is dead!”

“Despite the fact that the Mueller Report should not have been authorized in the first place & was written as nastily as possible by 13 (18) Angry Democrats who were true Trump Haters, including highly conflicted Bob Mueller himself, the end result is No Collusion, No Obstruction!” he tweeted.

He went on to accuse the “fake news media” of “doing everything possible to stir up and anger the pols and as many people as possible seldom mentioning the fact that the Mueller Report had as its principle conclusion the fact that there was NO COLLUSION WITH RUSSIA.”

“The Russia Hoax is dead!” he added.

Trump, who repeatedly railed against the Mueller probe during its two-year investigation into Russia interference in the 2016 election, declared he was “having a good day” when the report finally landed on Thursday. He also tweeted that it was “game over” for this political opponents, as his legal team issued a statement calling the report a “total victory for the president.”

They pointed to the report's findings, namely that Mueller's office found no evidence of collusion and did not conclude that a crime was committed on the question of obstruction of justice. However, it also contained a number of embarrassing details for the White House that were considered as part of the obstruction inquiry -- particularly Trump's efforts to curb or influence the probe.

“The president’s efforts to influence the investigation were mostly unsuccessful, but that is largely because the persons who surrounded the president declined to carry out orders or accede to his requests,” investigators wrote.

Those findings quickly rose to the surface of media coverage and caught the attention of politicians on both sides of the aisle.

Sen. Mitt Romney, R-Utah., said in a statement Friday that he was "sickened at the extent and pervasiveness of dishonesty and misdirection by individuals in the highest office of the land, including the president."

He also cited report findings that campaign aides welcomed help from Russia, "including information that had been illegally obtained; that none of them acted to inform American law enforcement; and that the campaign chairman was actively promoting Russian interests in Ukraine."

While its bottom line finding of no evidence of collusion has been enough for the White House to declare victory, the other findings have led Democrats to call for further investigations, including impeachment hearings. House Judiciary Committee Chairman Jerry Nadler, D-N.Y., subpoenaed the full, unredacted report as well as underlying materials on Friday, while Sen. Elizabeth Warren, D-Mass., was one of a number of Democrats calling for impeachment hearings.

"The severity of this misconduct demands that elected officials in both parties set aside political considerations and do their constitutional duty," she said. "That means the House should initiate impeachment proceedings against the President of the United States."

On Friday, Trump took a more critical stance toward the report than he had on Thursday, and took aim at aides who had spoken to Mueller, He was apparently responding to a detail in the report that outlines how Trump allegedly told then-White House Counsel Don McGahn to inform the acting attorney general that Mueller should be removed in June 2017 -- a demand that McGahn ignored. Trump also reportedly questioned McGahn’s habit of taking notes and making memos for the record.

“Statements are made about me by certain people in the Crazy Mueller Report, in itself written by 18 Angry Democrat Trump Haters, which are fabricated & totally untrue. Watch out for people that take so-called 'notes,' when the notes never existed until needed,” he tweeted, before calling some statements in the report “total bull---t.”

He later said it was “finally time to turn the tables and bring justice to some very sick and dangerous people who have committed very serious crimes, perhaps even Spying or Treason.”

However, even amid signs that the controversy over the Mueller report is by no means over, there are some signs that the report has had some positive effects for the president. The Trump 2020 campaign announced Friday that it had raised more than $1 million since the report was released.

“The two-year lie was put to bed once and for all. It was a great day for the campaign and Americans responded enthusiastically,’ Trump campaign COO, Michael Glassner, said in a statement.

Even on Saturday, Trump tried to strike a positive tone on the report, saying that the "end result of the greatest Witch Hunt in U.S. political history is No Collusion with Russia (and No Obstruction)."