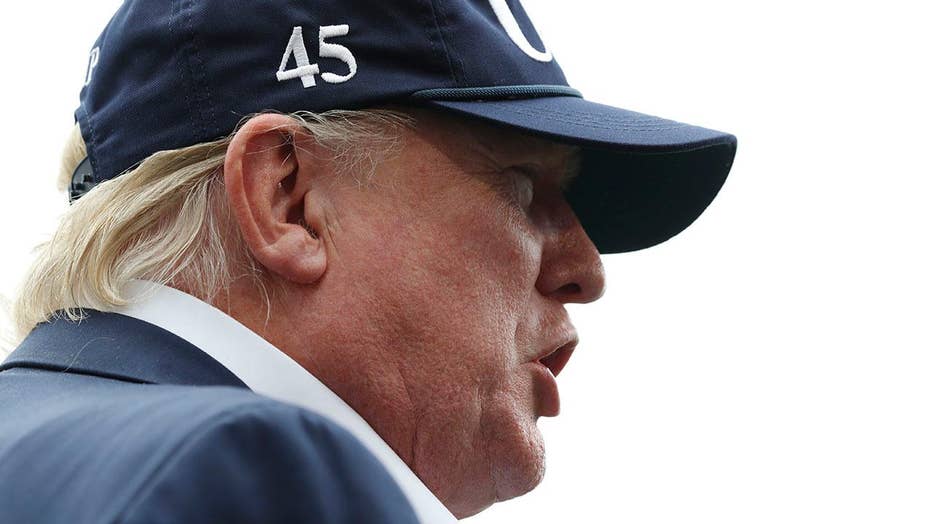 Pete Buttigieg slams the president's decision to play golf as the storm approaches Florida, the White House insists Trump has been receiving hourly updates on the storm. Kristin Fisher reports from Washington, D.C.

President Trump on Tuesday blasted “incompetent” London Mayor Sadiq Khan, telling him to “stay out of our business” and focus on crime in his city, after he mocked the U.S. president for golfing as Hurricane Dorian approached.

“The incompetent Mayor of London, Sadiq Khan, was bothered that I played a very fast round of golf yesterday. Many Pols exercise for hours, or travel for weeks. Me, I run through one of my courses (very inexpensive). President Obama would fly to Hawaii,” Trump tweeted.

“Khan should focus on ‘knife crime,’ which is totally out of control in London. People are afraid to even walk the streets,” he continued. “He is a terrible mayor who should stay out of our business!”

The president’s tweets follow Khan’s comments to Politico. Khan had traveled to Poland over the weekend for a ceremony to commemorate the 80th anniversary of the start of World War II — a trip the president opted out of, instead sending Vice President Pence so that he could monitor Hurricane Dorian.

But Khan told Politico in an interview Sunday that Trump couldn’t attend because he was “clearly busy dealing with a hurricane out on the golf course.”

Trump, who announced Thursday he was canceling his Warsaw trip, on Saturday left the Camp David presidential retreat in Maryland, where he and experts were monitoring the then-Category 4 hurricane, and traveled by helicopter to his private Virginia golf club for several hours. White House press secretary Stephanie Grisham said Trump traveled with a FEMA official and that he was being briefed “every hour.”

Khan went on to slam Trump as “a guy who amplifies racist tweets; amplifies the tweets of fascists; says things that are deeply objectionable.”

“If I don’t stand up and call that out, I think I’m doing a disservice to Londoners who chose me as their mayor,” he said.

The comments renewed a longstanding feud between the two. Trump and Khan first clashed in 2016, when Trump floated the idea of banning Muslims from traveling to the U.S.

The two last traded jabs in June during the president’s visit to the United Kingdom. Trump called Khan a “stone-cold loser” when he arrived to London, and Khan responded by telling BBC that the president’s insults reminded him of “the sort of thing an 11-year-old would do.”

At a London press conference with outgoing U.K. Prime Minister Theresa May, Trump also accused Khan of doing a poor job as mayor by failing to address crime and “a lot of problems” within his city. He criticized Khan and other left-wing activists for protesting his visit to the country amid Brexit negotiations.

"I don't think he should be criticizing a representative of the United States that can do so much good for the United Kingdom," Trump told reporters of Khan at the time. "He's a negative force, not a positive force."