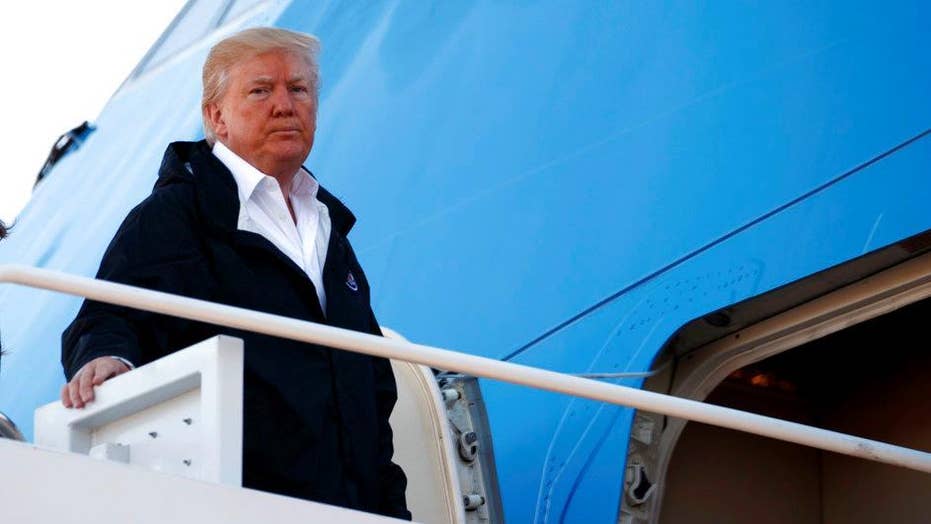 Trump on Las Vegas: We'll be talking about gun laws as time goes by

President Trump left Washington Wednesday morning en route to Las Vegas where he plans to meet with the victims, first responders and doctors caught up in the deadliest mass shooting in U.S. history.

But he is expected to steer clear of the gun control issue.

Trump is expected to meet with survivors of Sunday's massacre -- in which Stephen Paddock opened fire on an outdoor concert audience from the 32nd floor of the Mandalay Bay Resort and Casino, killing at least 59 people and wounding more than 520 others.

The president said it's a "sad day" as he departed Wednesday morning.

The motive for the attack remained unknown, with Clark County Sheriff Joseph Lombardo saying: “I can’t get into the mind of a psychopath at this point.”

White House press secretary Sarah Huckabee Sanders said Tuesday that the purpose of the president's trip was to "grieve with the friends and family of the victims” and offer “support to those recovering from wounds and thank courageous first responders.”

But despite growing calls to discuss gun control, the president will likely bypass the oportunity. “With this investigation still in its early phases, we should avoid making sweeping policy decisions,” a White House official told Politico.

Trump hinted as much himself Tuesday, when asked about Las Vegas prior to his visit to hurricane-damaged Puerto Rico.

“Look, we have a tragedy," Trump told reporters. "What happened [in Las Vegas] is, in many ways, a miracle. The police department, they’ve done such an incredible job. And we’ll be talking about gun laws as time goes on."

It will nevertheless be difficult to avoid questions about gun control, as a majority of Americans support strengthening existing gun laws, USA Today reported. Senior Democratic politicians have also urged Trump to push for additional regulations.

A candlelight vigil is pictured on the Las Vegas Strip following a mass shooting at the Route 91 Harvest Country Music Festival, Oct. 2, 2017. (Reuters)

One of them, Senate Minority Leader Chuck Schumer, D-N.Y., appealed to Trump’s previous stance of supporting some gun control.

“President Trump, before he ran for office, was for certain sane, rational, limited aspects of gun control,” Schumer said on the Senate floor Tuesday. “Maybe he can have a bit of a reawakening because of the horror of what happened as he goes to Las Vegas tomorrow.”

Schumer said he also hoped to see a bipartisan effort to push against the “absurd law about silencers” -- referring to a bill that would lift a ban on devices that muffle the sound of gunfire. (After the Las Vegas shooting, House Speaker Paul Ryan said he has no plans to bring the silencer bill to the House floor for a vote, the Washington Post reported.)

But despite taking a moderate position on gun control while a private citizen, President Trump has since become a staunch defender of the Second Amendment -- earning the endorsement of the National Rifle Association during the 2016 presidential election.

“You came through big for me, and I am going to come through for you,” Trump said in April at the NRA’s convention.