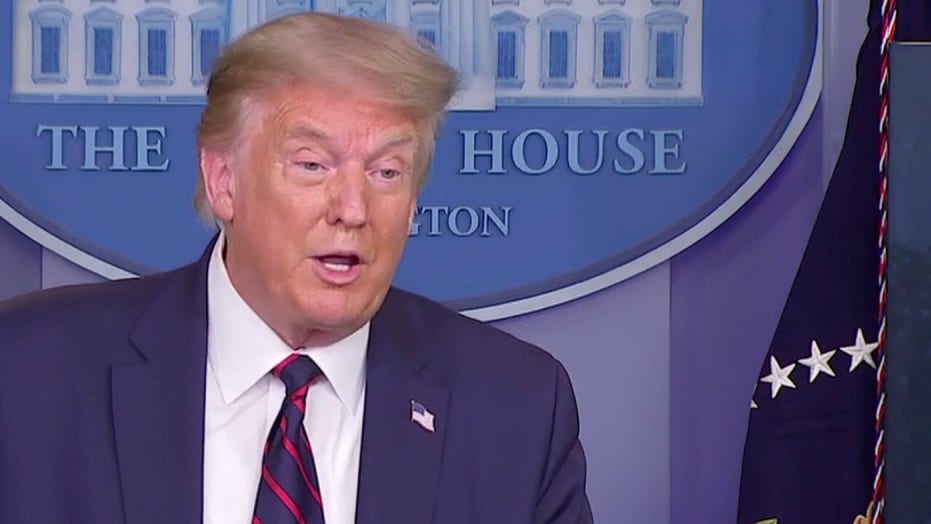 President Trump wishes Ghislaine Maxwell well, says he has not been following her case

President Trump on Tuesday commented on the arrest of Ghislaine Maxwell, the incarcerated former girlfriend of Jeffrey Epstein, and said he wishes her "well."

During a coronavirus briefing at the White House, a reporter noted that Trump has criticized Bill Clinton and Prince Andrew for their rumored involvement in the Epstein sex scandal, and asked the president if he thinks Maxwell will turn in “very powerful men.”

The president added that he hadn’t “really been following it too much” and he didn’t know anything about the situation with Prince Andrew.

In August of last year, around the time that Epstein committed suicide in prison, the president added fuel to conspiracy theories that implied the Clintons were somehow involved in Epstein’s death.

"Died of SUICIDE on 24/7 SUICIDE WATCH ? Yeah right! How does that happen," a tweet by Terrence K. WIlliams read, alongside a photo of Epstein and one of the Clintons. "#JefferyEpstein had information on Bill Clinton & now he’s dead I see #TrumpBodyCount trending but we know who did this! RT if you’re not Surprised."

“Just ask Prince Andrew,” Trump told reporters at the Conservative Political Action Conference (CPAC) in 2015. “He’ll tell you about it. The island was an absolute cesspool.”

The U.S. Department of Justice (DOJ) is now seeking an interview with Prince Andrew as part of its criminal investigation into Epstein and his associates.

Maxwell, the socialite daughter of late British media magnate Robert Maxwell, was arrested in early July and charged with conspiracy and perjury in a multi-state sex trafficking ring involving three unnamed minors between 1994 and 1997.

Prosecutors alleged that Maxwell, between that time, "assisted, facilitated and contributed to Jeffrey Epstein's abuse of minor girls by, among other things, helping Epstein to recruit, groom and ultimately abuse victims known to Maxwell and Epstein to be under the age of 18."

New York Judge Alison Nathan said Maxwell, accused of sexually abusing and exploiting girls as young as 14 alongside Epstein, posed too great a flight risk to be allowed to leave. Maxwell will be behind bars in a Brooklyn, N.Y., detention center until her trial, tentatively scheduled for July 2021. She was arrested on July 2 at her New Hampshire estate.

Another woman has claimed that Maxwell herself raped her dozens of times -- beginning when she was just 14 years old -- and says she is willing to take the stand and testify against Epstein’s ex-girlfriend.

Maxwell's arrest and the details surrounding her case have given the world a glimpse into the life of the woman once considered Epstein's closest confidant and who has hobnobbed with princes and presidents around the world. Her proximity to Epstein and those he socialized with has made her the target of powerful people who now prefer not to have their names associated with Epstein or Maxwell.

Trump, who in the briefing Tueday admitted he’s met Maxwell “numerous times,” has been photographed with Maxwell, along with Epstein and now-first lady Melania Trump.

Maxwell is facing up to 35 years in prison if convicted on the charges.