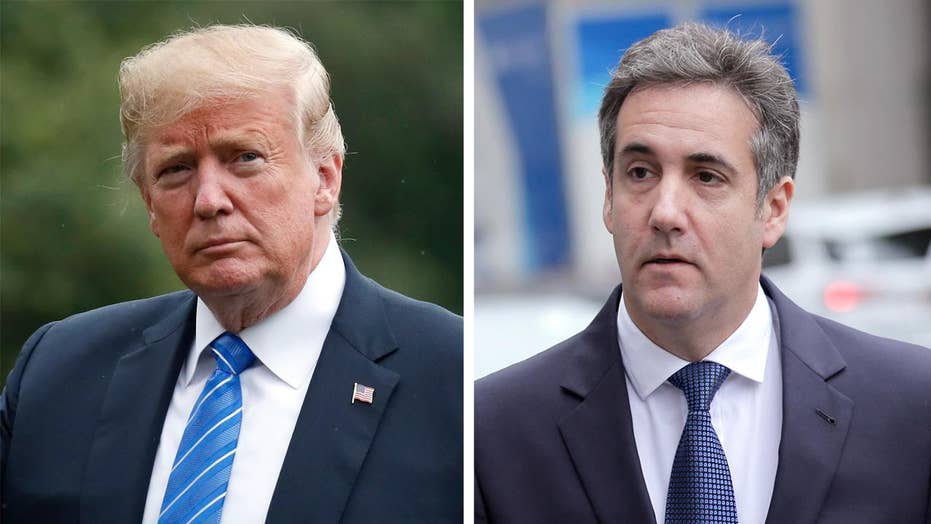 President Trump unleashed a broadside Friday at his former attorney Michael Cohen, denying his reported claim that the president knew in advance of the controversial June 2016 meeting at Trump Tower involving his son, members of his campaign and a Russian attorney who supposedly promised “dirt” on Hillary Clinton.

In a blistering tweetstorm, the president also suggested Cohen has turned on him, with the help of Clinton confidant lawyer Lanny Davis, to get out of trouble with his taxi business or other dealings.

“I did NOT know of the meeting with my son, Don jr. Sounds to me like someone is trying to make up stories in order to get himself out of an unrelated jam (Taxi cabs maybe?). He even retained Bill and Crooked Hillary’s lawyer. Gee, I wonder if they helped him make the choice!” Trump tweeted Friday.

The president’s tweet comes as Cohen, who served as a Trump Organization attorney for more than a decade, reportedly claims he was in the room when Trump was informed in advance of the Russians’ offer for dirt and approved the 2016 meeting.

Cohen’s claim, reported by CNN and The New York Post, directly contradicts assertions made by the White House and the president on the matter.

MICHAEL COHEN SECRETLY RECORDED CONVERSATION WITH CNN'S CUOMO, TELLING HIM HE PAID STORMY 'ON MY OWN': REPORT

When asked about Cohen’s claim that POTUS knew in advance about the June 2016 meeting between Don Jr and Veselnitskaya, Rudy Giuliani told Fox News “Not true”.

“He’s been lying all week, he’s been lying for years,” Giuliani told CNN’s “Cuomo Prime Time” on Thursday night. “I don’t see how he’s got any credibility.”

Giuliani added that Cohen “is the kind of witness that can really destroy your whole case,” and called Cohen a “pathological liar.”

"A person who is found to be an incredible liar, he’s got a tremendous motive to lie now because he’s got nothing to give, says it, all of a sudden, at the 11th hour. I don’t think anybody believes that,” Giuliani told CNN.

“Donald Trump Jr. has been very professional and responsible throughout the [Special Counsel Robert] Mueller and Congressional investigations,” Futerfas said in a statement to Fox News. “We are very confident of the accuracy and reliability of the information that has been provided by Mr. Trump Jr., and on his behalf.”

Cohen’s attorney Davis did not immediately respond to Fox News’ request for comment.

Cohen’s latest claim comes days after he released a recorded conversation between he and Trump about a possible payment to Playboy model Karen McDougal to buy the rights of her story that claimed an alleged affair with Trump.

Cohen is currently under criminal investigation as part of a grand jury probe into his personal business dealings. His personal properties were raided earlier this year by investigators. The tape, leaked to CNN by his attorney this week, was seized in the raid.

But his latest claim referring to the June 9, 2016 meeting was first reported by The New York Times in the summer of 2017, reigniting claims that the Trump campaign coordinated with Russia during the presidential election.

Trump Jr., his brother-in-law Jared Kushner, and then-campaign chairman Paul Manafort were known to have attended the meeting with Kremlin-linked attorney Natalia Veselnitskaya.

Goldstone, in an email to Trump Jr., referred to Veselnitskaya as “the Russian government attorney who is flying over from Moscow.”

Goldstone, at the time, said that he could set up a meeting to provide “very high level and sensitive information” compromising Clinton’s election chances as part of “Russia and its government’s support for Mr. Trump.”

It remains unclear what Goldstone was referring to.

Following the controversy, Trump Jr. defended himself, saying Veselnitskaya did not have any such information and wanted to focus on non-election related issues, such as Russian adoption and the Magnitsky Act, which brings harsh sanctions on Russian oligarchs suspected of money laundering.

In an email to Fox News in October 2017, Veselnitskaya said that the meeting was meant to discuss the sanctions law aimed at top Russian officials.

“I had never been looking for a meeting neither with Trump Jr., nor Sr., nor his team,” Veselnitskaya wrote to Fox News in an email last year, sent in Russian and translated to English by her translator. Veselnitskaya wrote, however, that she “had been told” Trump Jr. “could help” her bring information to members of Congress about the law.

Trump repeatedly denied having any knowledge of the meeting, but defended his son for taking it.

“Most politicians would have gone to a meeting like the one Don jr attended in order to get info on an opponent. That’s politics!” Trump tweeted the day the New York Times story was published last year.

Trump also tweeted Friday, blasting Mueller and his team for developments in their investigation. A New York Times report on Thursday said that the special counsel team was investigating the president’s tweets as part of their probe into Russian meddling and potential collusion with Trump campaign associates.

“Arrived back in Washington last night from a very emotional reopening of a major U.S. Steel plant in Granite City, Illinois, only to be greeted with the ridiculous news that the highly conflicted Robert Mueller and his gang of 13 Angry Democrats obviously cannot find collusion…,” Trump tweeted Friday morning.

Minutes later he added: “…the only Collusion with Russia was with the Democrats, so now they are looking at my Tweets (along with 53 million other people)—the rigged Witch Hunt continues! How stupid and unfair to our Country…”