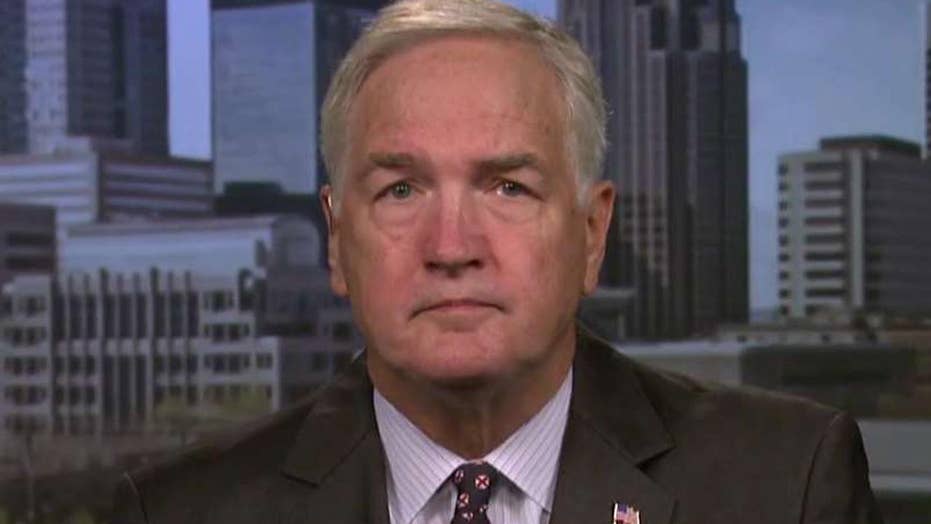 President Trump made a surprise endorsement on Tuesday night in Alabama’s Republican Senate primary, throwing his support behind incumbent Sen. Luther Strange over the other conservative candidates running just one week before election day.

“Senator Luther Strange has done a great job representing the people of the Great State of Alabama,” Trump tweeted. “He has my complete and total endorsement!”

The primary to fill the seat once held by Attorney General Jeff Sessions is set for next Tuesday, Aug. 15. A run-off will be held Sept. 26 if no candidate gets more than 50 percent of the vote, which seems likely in the crowded field though polling has been scarce.

“Mr. President, what an honor,” Strange tweeted after Trump’s announcement. “Thank you so much for your support and confidence. Proud to work with you to #MAGA #ALsen.”

Trump's endorsement is a major blow to U.S. Rep. Mo Brooks, a conservative lawmaker who has been endorsed by pro-Trump figures, including Laura Ingraham, Mark Levin and Sean Hannity.

"I respect President Trump, but I am baffled and disappointed Mitch McConnell and the swamp somehow misled the president into endorsing Luther Strange,” Brooks said in a Wednesday statement.

Former Alabama Supreme Court Chief Justice Roy Moore, who has the ardent support of Christian conservatives, is also vying for a spot in the run-off and has vowed to be a reliable advocate for the Trump administration in Washington.

Trump's endorsement of Strange is a win for Senate Majority Leader Mitch McConnell, whose political operation has been boosting Strange while running ads portraying Brooks as not sufficiently pro-Trump.

During the 2016 Republican presidential primary, Brooks supported Texas Sen. Ted Cruz, something his opponents have used against him. A super PAC with ties to McConnell, the Senate Leadership Fund, has been running television ads of Brooks’ past critical comments about Trump.

Meanwhile, Brooks has been tying Strange to the Republican establishment and McConnell, whom he says he would not vote for as Republican majority leader.

Strange, the state’s former attorney general, was temporarily appointed to the seat in April after Sessions joined the Trump administration.

His opponents have used that appointment from former Gov. Robert Bentley against him: Strange’s office was investigating Bentley before the governor made him senator. Bentley has since resigned from office in scandal.

The contest has been defined largely over candidates emphasizing their support of the president in a state where the president remains widely popular.

Discussing Trump’s election to the White House, Strange said this month: "I consider it a biblical miracle that he's there."

Brooks has vowed to fight for funding for Trump’s border wall. “And if I have to filibuster on the Senate floor, I’ll even read the King James Bible until the wall is funded,” Brooks said in a recent ad.