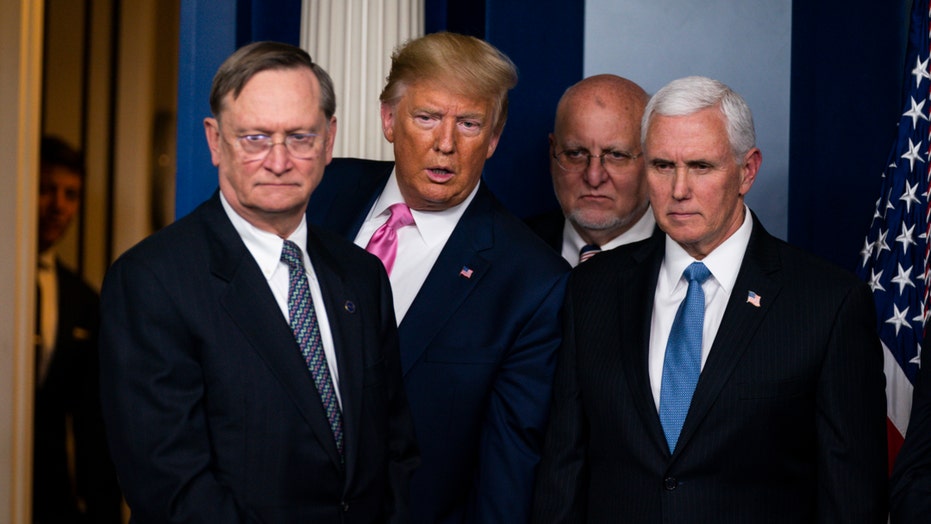 As his administration is working to organize its response to the coronavirus threat in the United States, President Trump slammed Democrats overnight for allegedly "wasting time" going after him.

A series of late-night tweets marked the latest exchange between the White House and congressional Democrats over the outbreak, with each side simultaneously urging the other not to politicize the potential crisis yet also taking shots at press conferences and on social media -- complicating efforts to work together.

"So, the Coronavirus, which started in China and spread to various countries throughout the world, but very slowly in the U.S. because President Trump closed our border, and ended flights, VERY EARLY, is now being blamed, by the Do Nothing Democrats, to be the fault of 'Trump'," the president tweeted just after midnight.

The Democratic leaders' statement then went on to list a few provisions they demanded be in any funding bill, including safeguards to prevent the president from spending coronavirus money on anything else.

Trump followed up his post-midnight tweet with another one about 40 minutes later.

"The Do Nothing Democrats were busy wasting time on the Immigration Hoax, & anything else they could do to make the Republican Party look bad, while I was busy calling early BORDER & FLIGHT closings, putting us way ahead in our battle with Coronavirus," Trump said. "Dems called it VERY wrong!"

Thursday marked Vice President Mike Pence's first day leading the country's coronavirus response after Trump announced he would take on the role in a Wednesday evening press conference. Pence sought to ease Americans' fears by citing the low number of U.S. cases of the virus that originated in China -- calling the current risk it poses to Americans "low" -- as he defended Trump's response to the crisis in an interview with Fox News' Sean Hannity Thursday.

Coronavirus politics has also infected the presidential campaign trail, with several 2020 candidates panning the president over his actions not just on coronavirus but his previous moves to cut funding to public health programs. Sen. Amy Klobuchar, D-Minn., criticized Trump specifically over proposed cuts to the Centers for Disease Control and Prevention (CDC).

Meanwhile, Trump praised the CDC, Pence and others for their response to coronavirus in a tweet posted just before 10 p.m. Thursday.

"Congratulations and thank you to our great Vice President & all of the many professionals doing such a fine job at CDC & all other agencies on the Coronavirus situation," the president said. "Only a very small number in U.S., & China numbers look to be going down. All countries working well together!"

But minutes before, Trump was rehashing previous complaints about the media's coverage of his administration and its handling of the new pathogen, which causes a disease officially called COVID-19.

"'Anti-Trump Network @CNN doing whatever it can to stoke a national Coronavirus panic. The far left Network pretty much ignoring anyone who they interview who doesn’t blame President Trump,'" Trump said, citing Fox Business host Trish Regan. "Media refuses to discuss the great job our professionals are doing!"

Trump had previously blamed MSNBC and CNN for trying to make the coronavirus "look as bad as possible," saying they were aiming to panic markets over the disease threat.

The Dow Jones Industrial Average suffered its largest one-day tumble in nine years, falling 4.42 percent on Thursday, and has lost a total of 3,225.77 points this week alone. A prolonged stock market panic could put a dent in Trump's main reelection argument -- that the economy is thriving. Dow futures for Friday were down upwards of 400 points overnight.

American authorities are currently trying to figure out how one person in Northern California caught the coronavirus. This is the first case in the U.S. of unknown origin, meaning that the virus could now be spreading in American communities.

In a potentially encouraging sign of a bipartisan response to coronavirus, however, Rep. Tulsi Gabbard, D-Hawaii, managed to secure testing kits for her state from the CDC after asking permission to buy them from Japan. The congresswoman and presidential candidate delivered a video message Thursday asking Trump to give Hawaii the go-ahead to buy the kits from Japan.

"Today I'm calling on President Trump to instruct the bureaucrats at the CDC and the FDA to immediately allow the state of Hawaii to get testing kits and related items from Japan since the CDC is failing to provide them," Gabbard said. "As an island state, with responsible leadership we can keep this virus out. But we won't be able to do that without our state and federal leaders taking it much more seriously than they are right now."

A statement from Gabbard's presidential campaign later Thursday night confirmed that the federal government had made it possible for Hawaii to get ahold of testing kits without buying them from Japan.