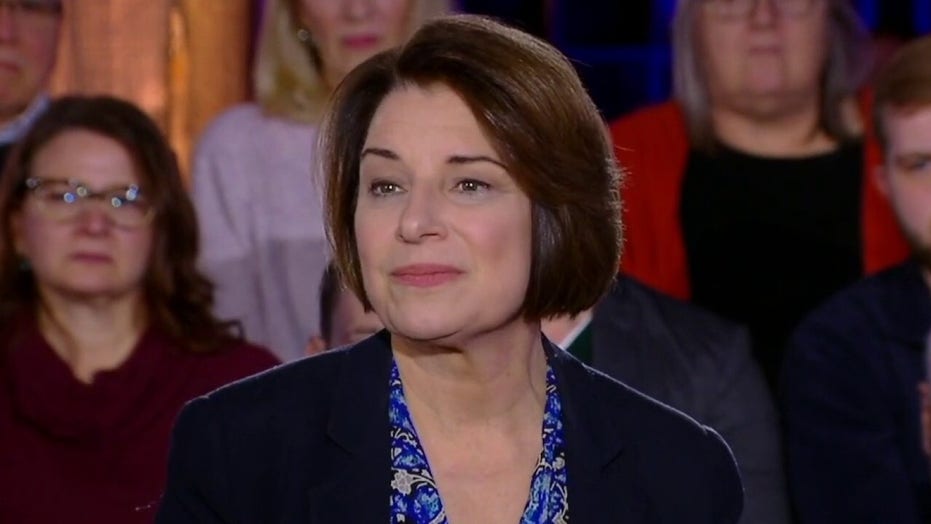 Democratic presidential candidate Amy Klobuchar discusses how her administration would handle coronavirus fears and being a moderate in the 2020 race with moderators Bret Baier and Martha MacCallum in Raleigh, North Carolina.

Calling for a "return to sanity" in foreign and domestic policy, Amy Klobuchar hoped to revitalize her struggling presidential campaign at a Fox News Channel town hall in Raleigh, N.C. Thursday evening, just ahead of Saturday's South Carolina primary and the 14 key Super Tuesday races next week.

Near the bottom in the polls in South Carolina, Klobuchar came out swinging at both President Trump and Democratic frontrunner Bernie Sanders. She charged that the White House hasn't done enough to contain the coronavirus outbreak, minutes after a whistleblower surfaced alleging that The Department of Health and Human Services may have recklessly exposed its own workers to the deadly virus.

"This is such a serious matter," Klobuchar said, insisting that she wanted people to "take the politics out of it." Within seconds, though, she attacked President Trump for proposing to cut funding for the Centers for Disease Control and Prevention (CDC) -- funding reductions that haven't taken effect.

"I just don't think we can isolate ourselves from the rest of the world," Klobuchar said. "I believe in science, I believe in not silencing health professionals." She added: "We're gonna have to have the funding on a federal level. The president hasn't really proposed an amount."

Specifically, Klobuchar said she "thought that was a very messy situation with the 14 people off the cruise that we later found out they were infected and they ended up on the plane. ... That should've been handled differently."

Pressed by Fox News' Bret Baier about where she stood on a widely panned op-ed in The New York Times saying coronavirus should be called "Trumpvirus," Klobuchar demurred: "I think there's a lot of frustration there with not requesting the funding. ... I think you're seeing that bubbling up. He said $1 billion, but Congress thinks it should be $8 billion, but then she said Congress should decide."

Klobuchar, who posted an unexpectedly strong third-place finish in New Hampshire's primary but fell to sixth place in the Nevada caucuses, has sought to boost her support among centrists in less delegate-rich states that other candidates haven't showered with attention. Her campaign has also committed to a $4.2 million advertisement buy in Super Tuesday states.

At the Fox News Town Hall, hosted by Baier and Martha MacCallum, Klobuchar acknowledged she doesn't have the "biggest bank account" in the raise, but touted her newspaper endorsements and noted jokingly that she has more delegates than Mike Bloomberg.

At the town hall, Klobuchar again took aim at Sanders, noting as she did during the debate that "all of Bernie's plans combined  --- have been estimated to cost $60 trillion. That's three times the cost of the entire U.S. economy. Not just the federal government."

Asked about Sanders' anti-fracking platform, which could alienate key moderate and union voters in swing states like Pennsylvania, Klobuchar emphasized that her administration would focus on alternative green solutions, such as imposing a carbon tax and cutting down on steel dumping.

The Minnesota senator sought to appeal to a more centrist position on abortion, as well, stopping short of Sanders' stated position that pro-life Democrats have no place in the party. (“I think being pro-choice is an absolutely essential part of being a Democrat,” Sanders said this year. “By this time in history . . . when we talk about what a Democrat is, I think being pro-choice is an essential part of that.")

"I am strongly pro-choice -- I always have been," Klobuchar said. "Just as I think there's a place in our party for a pro-life Democrat, there's also a place in my support for pro-choice Republican. So, you look at a candidate and you make a decision, even though you don't agree with them on every single thing."

"Yes, there are pro-life elected officials in the Democratic Party, and that's OK," Klobuchar added, saying she disagrees with Trump on defunding Planned Parenthood.

Pressed by MacCallum on Democrats' recent opposition to the so-called "Born Alive" bill, which would establish criminal and professional consequences for physicians who don't provide a normal standard of care to babies that survive abortions, Klobuchar dismissed Republican efforts to pass the legislation. 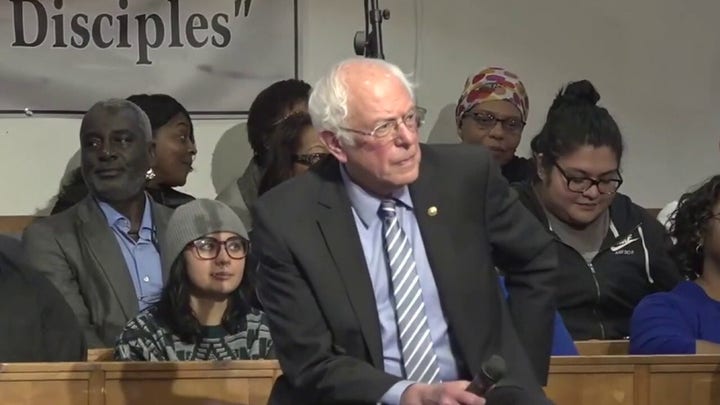 "I would've voted with the Democrats on that, because I think Roe v. Wade is now the law of the land, and I think a lot of these bills are attempts to change that."

Klobuchar separately declined to push for Elizabeth Warren to further explain her past, conflicting claims of Native American ancestry, saying Warren has adequately addressed the issue.

At a Fox News Town Hall last May, Klobuchar emphasized that her brand of relatively moderate progressive politics stood the most chance of actually achieving results ("The last time I checked, if you want to be a progressive and support progressives, then you're supposed to make progress," Klobuchar said.) She also asserted that universal health care was a "privilege and not a right," and intimated that there were some aspects of President Trump's tax bill that she would retain.

“What happens in South Carolina does matter, mostly because of what the coverage is going to be over the three days leading up to Super Tuesday. If someone seems out of the running, they’re going to lose value,” said Achim Bergmann, a Democratic strategist whose firm does work in a number of Super Tuesday states. “It’s a tough deal for the candidates who are perceived to be at the lower rungs at the moment to figure out where can they get some juice.”

Klobuchar and her rivals have faced logistical challenges because of the large number of states voting on Tuesday, which comprise a third of the total delegates needed for the nomination.

"It’s a very difficult time, logistically, to try to balance all this,” acknowledged Sanders adviser Jeff Weaver. “Suddenly, now you have contests all across the country, and candidates just have to do the best they can.” 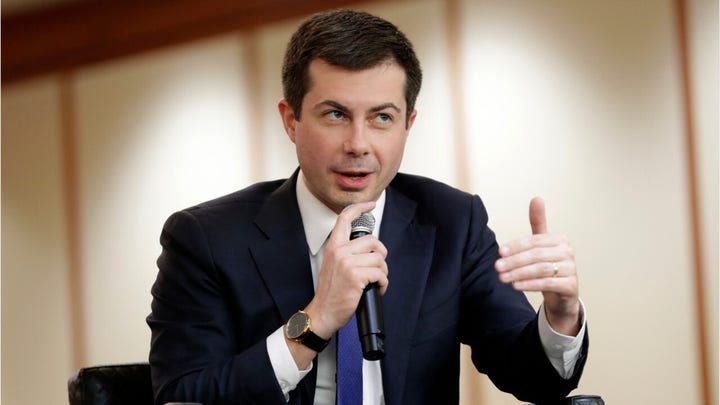 For example, Pete Buttigieg had planned to swing down to Florida, which votes later in March, for three private fundraisers Wednesday. He abruptly canceled the events and a public campaign stop in the Miami area because of illness. His aides said he had flu-like symptoms.

Buttigeig met with members of the Congressional Hispanic Caucus and did media interviews in Washington, D.C., before returning to South Carolina on Thursday for another round of campaigning.

On Wednesday, Joe Biden, who is polling far ahead in South Carolina, turned heads by saying that other candidates would "have to consider dropping out" if they underperform in the diverse state.

They would have to consider dropping out, not because I want them to or anybody else does, but because the victories and losses are going to dictate it,” Biden told The Post and Courier. “How do you stay in if you have demonstrated you can’t get any African American support? How do you stay in if you don’t get support in South Carolina? So I just think the process is going to take care of that. I don’t think it requires anybody to say, ‘get out of the race.’”

Klobuchar, however, hasn't shown any signs that she may pull out -- and neither have Elizabeth Warren, Bloomberg, and other challengers behind Sanders. Should a candidate exit the race, delegates committed to that candidate could choose to support other candidates at the Democratic National Convention.