Biden: Trump 'abandoning our families,' 'surrendering to the virus'

With five days left until Election Day on Nov. 3, Democratic presidential nominee Joe Biden and President Trump took aim at each other and courted the dwindling ranks of undecided voters at campaign stops in Florida on Thursday.

The former vice president, at his first of two events Thursday in the Sunshine State, charged that “Donald Trump has given up,” as Biden slammed the president’s handling of the coronavirus pandemic.

With more than 228,000 deaths from COVID-19 since the pandemic first swept the nation in February and March, and over 8.9 million cases of the contagion in the country, Biden argued that “Donald Trump has waved the white flag, abandoned our families and surrendered to the virus.”

As Biden spoke at a drive-in car rally in the Democratic stronghold of Broward County in southeastern Florida, the president headlined a rally in Tampa, which is the western anchor of the Interstate-4 corridor, a crucial swing region that often dictates which party will win the state. 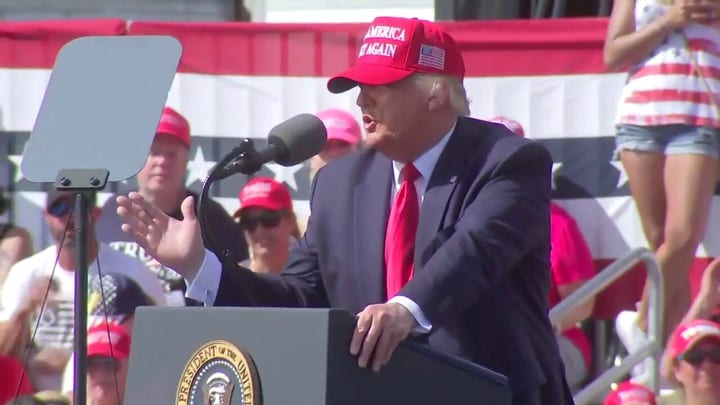 “The Obama-Biden recovery was the worst recovery since the Great Depression. All Biden does is talks about COVID,” Trump said at a rally just outside of Raymond James Stadium, home to the National Football League’s Tampa Bay Buccaneers.

“He doesn't call it the China virus. You know why? Because China pays him off,” Trump charged, without citing any evidence, as the crowd broke out in a “lock him up chant.”

“I didn't say it,” the president added.

The president - speaking in front of a large, mostly mask-less and shoulder-to-shoulder crowd – vowed that “we’re never going to lockdown again.” Trump has repeatedly claimed that Biden would impose severe coronavirus restrictions if elected.

And pointing to the economic recovery from the Great Recession under the Obama-Biden administration that Trump inherited, the former vice president accused the GOP incumbent in the White House of “squandering that economy, like he’s squandered everything else.”

Florida has long played a decisive role in presidential elections. Twenty years ago, it was the state that decided the battle between then-Texas Gov. George W. Bush and Vice President Al Gore. President Bush won the state by five points in his 2004 reelection.

President Barack Obama carried the state by razor-thin margins in both 2008 and 2012, and four years ago, Trump narrowly edged out 2016 Democratic nominee Hillary Clinton by just over one point to win the state’s prized 29 electoral votes.

THE LATEST FROM FOX NEWS ON THE BIDEN-TRUMP SHOWDOWN

The latest public opinion polls in the state show a close contest between Biden and the president. Three polls conducted last weekend and this week – NBC News/Marist College, Monmouth University, and Quinnipiac University - all indicate Biden with a mid-single-digit edge over Trump in Florida.

Both candidates, along with their running mates and high profile surrogates, have flooded Florida during the general election. And both campaigns and allied outside groups have poured resources and money into state.

Florida’s considered by many pundits and strategists to be a must win for Trump. And Biden on Thursday told his supporters that “you hold the key. If Florida goes blue, it’s over, it’s over.”

In his comments, the president told his supporters that the U.S. would be a “very big Venezuela” under a Biden administration.

Latinos make up about a quarter of the Florida population, and their votes will once again be crucial in deciding whether Biden or Trump win the largest tradition battleground in the country.

Since 2014, more than 3 million people have fled socialist Venezuela, according to UN estimates. Over 200,000 live in Florida.

Trump seemed surprised by his relatively strong Latino support in one of the surveys. “What the hell happened to those poll numbers?” he asked. “We are beating Biden with Hispanic Americans.”

First Lady Melania Trump introduced the president in their adopted home state. While the president has already cast his ballot, the first lady is expected to vote in Palm Beach County on Election Day.

“In a time when hate, negativity and fear are the messages the media streams into our homes, and the large tech companies are protecting political censorship, we need to remember what is really important: my husband's administration is focused on the future,” she told the crowd.

Biden was introduced by Patricia and Manuel Oliver. The couple's 17-year-old son Joaquin was killed in the shooting at Marjory Stoneman Douglas High School in nearby Parkland, Fla., in February of 2018.

The former vice president – who’s eldest son Beau died in 2015 and who’s first wife Neilia and 13- month old daughter Amy died in a car crash nearly 50 years ago – emphasized that “I know what it means to lose a child….Every time you want to stand up and talk about your son or daughter that you lost, it brings back the memories as if it happened 10 minutes ago. It takes a lot of courage to stand up and talk.”

Biden urged his supporters to “return your ballot today if you haven’t done it so far, or you can get to vote early in person through Nov. 1, but you’ve got to get out and vote and make sure everyone you know votes as well.”

After his Broward County event, Biden stopped by what his aides described as a campiagn victory center, to speak to staffers and volunteers. Later, he headed to Tampa to hold another drive-in car rally, while the president traveled to North Carolina, another battleground state.