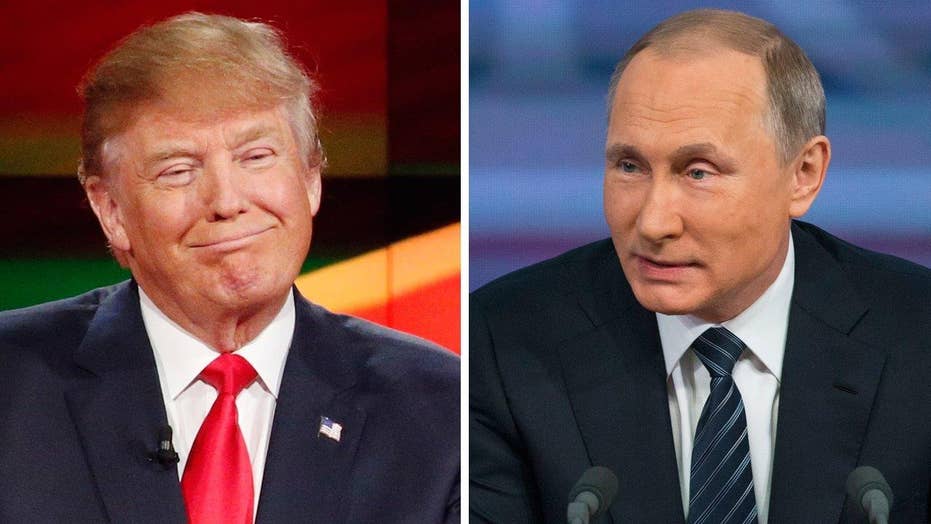 Donald Trump once again is being accused of giving Vladimir Putin a helping hand, on the heels of the Republican presidential front-runner's tough NATO criticism.

After the billionaire businessman criticized the alliance earlier this week as expensive and "obsolete," his political foes noted that any pull-back from the North Atlantic Treaty Organization, which was created in 1949, would be greeted as welcome news in Moscow.

“Donald's approach on foreign policy is one of weakness and isolationism,” Cruz added. “That's his position consistently across the globe.”

Trump took on the NATO issue during a meeting earlier this week with The Washington Post editorial board. He said the U.S. “shouldn’t be nation building anymore,” and NATO has become too expensive, with too little commitment from allies, to fully invest in. He accused Germany and other allies of not doing enough on Ukraine, which is locked in a regional power struggle with Russia.

“We certainly can’t afford to do this anymore,” he told the paper, adding later, “NATO is costing us a fortune, and yes we’re protecting Europe with NATO, but we’re spending a lot of money.”

This prompted Democratic presidential front-runner and former Secretary of State Hillary Clinton to sound off. “If Mr. Trump gets his way, it will be like Christmas in the Kremlin,” she said Wednesday in a Stanford University speech.

For his part, Trump stood by his comments, calling NATO “obsolete” on Twitter, though he stopped short of saying the U.S. needed to get out completely. Instead, he said NATO “must be changed to additionally focus on terrorism as well as some of the things it is currently focused on. ... We pay a disproportionate share of the cost of NATO. Why? It is time to renegotiate, and the time is now!"

Trump did not cast his comments as in any way a concession to Russia. But Trump and Putin famously have been making favorable comments about one another dating back months.

Russian authorities seem to be having fun with the political back-and-forth, with a Russian foreign ministry spokesman telling Reuters this week that Trump’s latest comments were welcome in that they showed the global alliance, which grew in the 1950s and '60s in reaction to the rise of the Soviet Union, in crisis. Russia has maintained that NATO abrogated agreements it made with Russia not to expand into former Soviet countries, including the Baltic States.

Trump and Putin are similar, the ministry told Reuters. “They are both open-minded, pragmatic, and say what they think.”

The "bromance" has caused some problems for Trump on the campaign trail. He took heat in January when he seemed to second-guess a British government investigation that found Putin’s government likely poisoned former KGB agent Alexander Litvinenko in London.

"First of all, he says he didn't do it. Many people say it wasn't him. So who knows who did it?" Trump said at the time.

Gary Schmidtt, security studies analyst at the American Enterprise Institute, told FoxNews.com that Cruz and Clinton were “on the mark” in their retort to Trump’s comments.

“It‘s certainly true he plays into Putin’s larger strategic plans, which have been pretty obvious,” in that he would like to reduce NATO’s influence, if not “deconstruct the security architecture that has been in place for decades.”

NATO currently has 28 member states and has been credited, said Schmidtt, with ending ethnic cleansing with its involvement in the Bosnian war, as well as praised for its work in the initial invasion and counterinsurgency in Afghanistan, among other recent joint security operations.

Trump isn’t the first to criticize NATO, however. As he was leaving office, former Secretary of Defense Robert Gates, too, questioned the disproportionate investment in the security organization.

In a 2011 speech in Brussels, he said that America's military alliance with Europe faces a "dim, if not dismal" future, mostly because of European allies who are "willing and eager for American taxpayers to assume the growing security burden left by reductions in European defense budgets."

At the time, the U.S. was contributing between one-fifth and one-quarter of NATO's budget. In fiscal 2010, that contribution totaled $711.8 million.

Schmidtt acknowledged there have been calls for reform -- and there is nothing wrong with that.

“Of course now we’re dealing with a resurgence of Russia,” he pointed out. “Is there room for improvement and reforms? Yes. But you can’t be like a child and and just pick up your toys and run away because you are not satisfied with your allies’ behavior.”

Brian Katulis, a national security fellow at the Center for American Progress, said Trump would unlikely be able to disengage from NATO even if he were to win the White House in November. Put simply, the alliances are important.

“You can’t throw the baby out with the bathwater,” he said, “especially with all the tangible benefits of work with NATO in Europe and the really force multipliers these alliances actually are.”