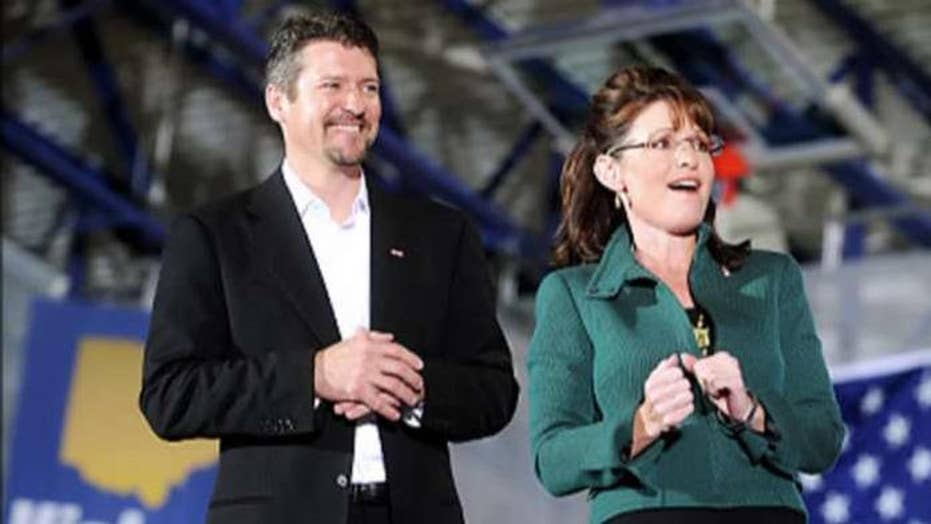 Todd Palin, the husband of Sarah Palin, was hospitalized after a serious snowmobile accident Sunday night, temporarily taking the former Alaska governor off the campaign trail for Donald Trump.

Sarah Palin, though, made a surprise appearance in Tampa, Fla., on behalf of Trump later Monday afternoon -- despite an initial statement from the Trump campaign saying she was returning to Alaska.

In the appearance, Palin thanked the public for their prayers as her husband recovers. She went on to slam the media for their coverage of unrest at Trump rallies and urged voters to back the primary front-runner, calling him a “revolutionary” that the country needs.

Palin later confirmed the snowmobile accident on her Facebook page calling her husband “the toughest guy I know.”

“As any adventurous Alaskan knows, while you may be down, you’re never out,” she said.

Todd Palin's father said late Monday that his son suffered eight fractured ribs and other injuries in the snowmobile accident.

Jim Palin told The Associated Press in a phone interview that his son also had injuries to his collarbone and lungs, but he doesn't know the extent of those injuries.

He added that Todd Palin is scheduled for surgery Monday at a hospital near the Palins' hometown of Wasilla.

He says he expects his son to recover fully. The father called the crash Sunday night "one of those freak accidents" and says it happened around Petersville, about 70 miles north of Wasilla.

Jim Palin, who splits his time between California and Alaska, says he plans to return to Alaska at the end of the month unless his son wants him there earlier.

“Governor Palin is returning to Alaska to be with her husband and looks forward to being back on the campaign trail soon. Mr. Trump’s thoughts and prayers are with the Palin family at this time,” the campaign said.

The statement came shortly after the campaign abruptly announced that the Sarah Palin appearance originally scheduled for noon at The Villages in Florida had been cancelled.

Just two days earlier, the former Alaska governor and 2008 GOP vice presidential nominee had posted on Facebook that she was heading out to the Sunshine State to stump for Trump, ahead of the state’s Tuesday primary.

“Surrendering my ice fishing hole on our still-frozen solid lake to other anglers for the next few days, I'm humbled to be able to hit the campaign trail again for our next POTUS, Donald J. Trump,” she wrote.

The details on her husband’s accident are unclear. NBC News reported that he is in intensive care, describing the accident as “very serious.”

Sarah Palin, meanwhile, has become one of Trump’s most vocal supporters since endorsing him in January. Before cancelling Monday’s noon event, she appeared on Trump's behalf at the Arcadia All-Florida Championship Rodeo and Florida Strawberry Festival on Sunday.