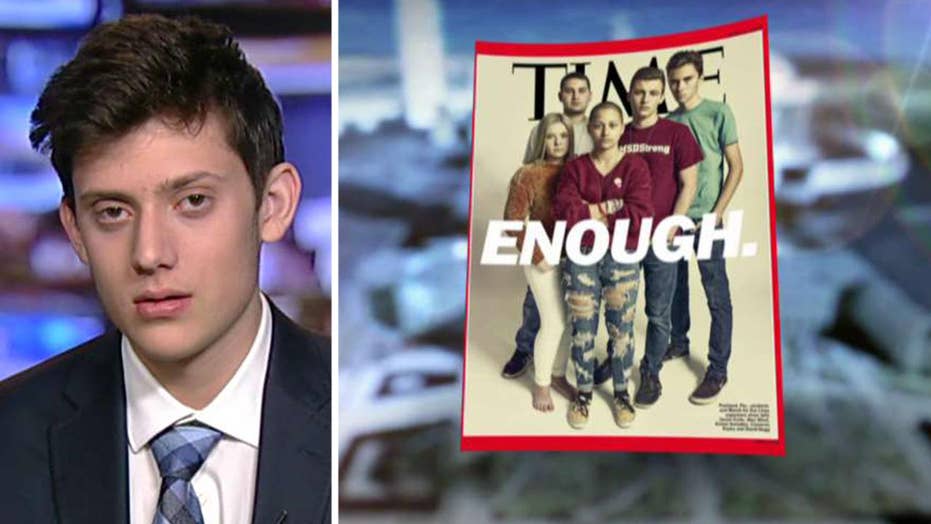 The cover of Time magazine this week features five anti-gun survivors of the Parkland, Fla., high school massacre, but has drawn criticism for pointedly omitting their pro-Second Amendment classmates.

One of those students, Kyle Kashuv, has been a prominent advocate for preventing violence while respecting gun rights in the weeks since the Feb. 14 shooting at Marjory Stoneman Douglas High School.

Kashuv has visited the White House, met with President Donald Trump and legislative leaders across party lines, and unveiled an app to prevent school shootings.

But unlike the students appearing on Time magazine's cover, including outspoken NRA opponents and "#NeverAgain" members Emma Gonzalez and David Hogg, Kashuv has publicly declared his support for the Second Amendment and tussled with liberal media figures.

After the Time cover was revealed Thursday, critics pounced on social media, accusing the magaizine of bias.

When one Twitter user asked why Time had not included students who support gun rights, Kushev answered, "Cause that would make TIME be unbiased."

He also retweeted parody versions of the Time cover, including one that features him with another conservative student from Parkland. The headline: "The Boys who Believe that Screaming ENOUGH is NOT ENOUGH."

Kashuv has recently sparred with other organizations that he accuses of bias.

While he was heading to a millennial-focused forum at the White House on Thursday, a flight attendant aboard his Spirit Airlines flight shared her feelings about the “March For Our Lives” movement.

“Just landed in Baltimore on @SpiritAirlines and the stewardess felt compelled to give us all a speech about the March for Our Lives, which openly says on the petition are trying to categorically ban AR-15's, and made everyone clap,” the high school junior tweeted on March 22. “Can anything just be non-political anymore?”

News of Kashuv's flight came one day after CNN canceled what would have been his first one-on-one interview on the network, scheduled for March 21.

The appearance was reportedly canceled after Kashuv retweeted a story describing anchor Brooke Baldwin as a “fake news hypocrite.”

For his part, Kashuv has already moved on.

“But don't worry, CNN really wants to have the other side on, as long as they're complicit,” he tweeted later that day.

"There's definitely a media blackout" for those with dissenting, pro-gun rights views, he told the Daily Signal.