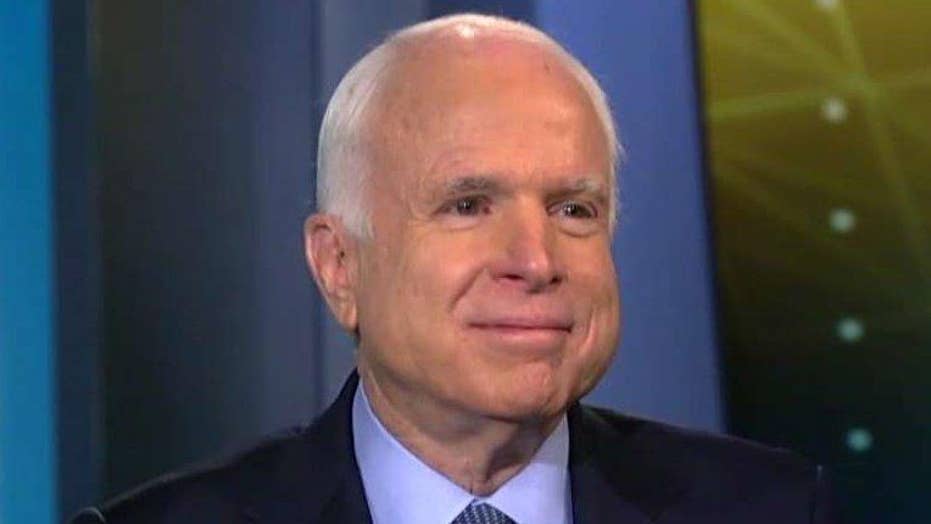 Sen. McCain on impact of Russia probes on Trump's agenda

Republicans expressed more dismay Sunday about a recent clash outside a Turkish embassy between non-violent protestors and Turkish President Recep Tayyip Erdogan's security team but disagreed about what the next step should be.

However, Tillerson said the administration will wait for the outcome of a department investigation, which will likely focus on cellphone videos of the bloody clash, before taking further action.

In the immediate aftermath of the incident, McCain said the U.S. should “throw their ambassador the hell out” of the country.

“Those were his people and Erdogan's people who were sent out there” to confront the protestors, McCain said Sunday. “That's not America.”

Protestors said they suffered concussions and lost teeth in the melee, which occurred just hours after Erdogan visited President Trump at the White House.

Turkey says the clash was the fault of demonstrators who aggressively provoked Turkish-Americans who had gathered to see Erdogan. The demonstrators said they were attacked by security forces as they peacefully protested. A video shared on social media Thursday showed Erdogan watching the melee.

The State Department prior to Sunday called the clash "deeply disturbing" and insisted there would be a "thorough investigation" to hold those responsible accountable.

Tom Shannon, the acting deputy secretary of State, met Wednesday with the Turkish ambassador, Serdar Kilic, to discuss the altercation.

Turkey's U.S. embassy alleged the demonstrators were associated with the Kurdistan Workers' Party (PKK), which has waged a three-decade-long insurgency against Turkey and is considered a terrorist group by the United States.

But Mehmet Yuksel, who arrived immediately after the incident and knows almost all of the little over a dozen demonstrators, said they weren't connected with that group. The victims included Americans, he said, and there was no justification for the attack.

Yuksel said one demonstrator seen in video of the attack carrying a bullhorn and being repeatedly kicked is in his 60s. The man suffered loose and broken teeth and had to return Friday to a hospital, he said.

Ceren Borazan, seen on video in a headlock, said in a Facebook post that the attack "popped a blood vessel in my eye."

Among those charged in the incident are Jalal Kheirabadi, 42, of Fairfax, Va., He is charged with assaulting a police officer. Kheirabadi says he was a victim, not an aggressor.

Tuesday's incident isn't the first time violence accompanied a visit by a Turkish leader to the U.S. Last year, violence erupted outside Erdogan's appearance at a nuclear security summit in Washington, and there have been scuffles at the United Nations.

A U.S. official who wasn't authorized to comment publicly on the matter and requested anonymity said the guards were released under a globally recognized custom under which nations don't arrest or detain visiting heads of state and members of their delegations.

The guards are back in Turkey with Erdogan, an authoritarian leader who survived a 2016 coup attempt and on Sunday was reelected as the leader of Turkey's ruling party.