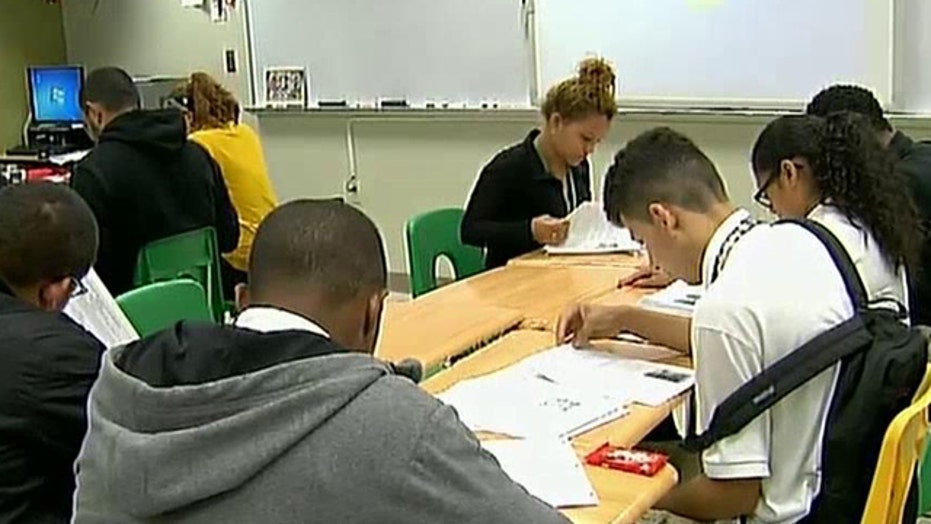 This is the seventh in a series of posts, one year after the surge of unaccompanied undocumented minors who crossed across the U.S.-Mexico border, examining the effects it has had on communities, schools and children themselves.

A year after the height of the so-called surge, a weeks-long period last summer when tens of thousands of Central American children crossed illegally into the United States, education experts say the federal government has left the burden of educating and caring for these children to cash-strapped public schools.

For tens of thousands of children who’ve journeyed to the U.S. without any family members from El Salvador, Guatemala or Honduras, this summer marks the end of their first academic school year.

The milestone also marks the first chance for some public schools to catch their breath after a whirlwind year of adapting to the unexpected influx of more than 60,000 unaccompanied minors in need of more than just a passing grade.

After being held temporarily by the federal government – for about a month, on average – more than 50,000 of children have been released to sponsors, usually a parent or relative, as they await their immigration court proceedings.

Over the last year, teachers and administrators have been left to teach these kids English, even though some of them had never stepped foot inside of a classroom and many are in need of mental health counseling following their traumatic encounters with gang violence, sex trafficking or kidnapping in their native countries.

The federal government has spent nearly $1 billion to deal with the border crisis, one President Barack Obama called an “urgent humanitarian situation” last summer. But just $14 million has gone to the Department of Education to distribute funds to schools on the frontlines of the crisis.

By law, all children, regardless of their immigration status, are entitled to an education.

The Hempstead School District, home to about 6,700 students at 10 schools, received an average of “maybe a couple of hundred” new enrollees a year, Johnson said. However, last summer’s enrollment skyrocketed to about 1,500 new kids – most of them undocumented immigrants.

The crush of new enrollees left the district scrambling, forcing it to dip into its emergency reserves to shell out more than $6 million to hire more English as a Second Language teachers and additional staff to alleviate overcrowded classrooms. Still, it has not been enough. The average classroom in the district now has about 40 to 50 children and one teacher, Johnson said, posing a safety issue.

“I feel like the federal government, once again, and the State Department of Education, they didn’t abandon me, per se, they abandoned the children,” Johnson, a lifelong Hempstead resident, said. “They have to make it easier for the children to succeed, not more difficult. And I think they made it more difficult.”

How the local school systems nationwide are faring is one of the untold stories of the unaccompanied children’s crisis, according to Margie McHugh, Director at the Migration Policy Institute’s National Center on Immigrant Integration Policy.

“Most of that money [the nearly billion dollars] went to the border and really trying to manage this from a migration point of view, and not thinking that all these kids are going into local school districts, they're going to be here for a good while, and it's really not fair to pass off those costs to local districts,” McHugh said.

Schools, she said, are facing two big challenges with this student population. The first is that there are a lot of mental health issues the children are dealing with that are undetected and undiagnosed. Secondly, many of these children come from school systems in their countries that are in complete disarray.

“You have to understand,” Johnson said of Hempstead’s new students, “many of the children are not even proficient in their native language, Spanish, and now we have to teach them how to speak English. That can be very difficult.”

Adding to the overwhelming pressures on schools, McHugh says, is that these students are expected to graduate on time. It’s the unrealistic expectations, especially on high school students, she said, that has led some communities to push back on educating these children.

In New York State alone, 20 school districts, including Hempstead, were investigated by the state’s Attorney General, Eric T. Schneiderman, for trying to illegally stop undocumented children from enrolling in their schools. The investigation found that the districts were making illegal inquiries into the students’ or their parents’ immigration status.

The Hempstead school district, which serves a population that is about 96 percent Latino and black, was found guilty of denying or delaying the enrollment of dozens of Hispanic students, many of them unaccompanied minors. Johnson categorically denies the AG findings that the district’s policies were discriminatory.

“Our district never stereotyped anyone, discriminated against anyone,” Johnson said. “It was more about being overwhelmed by the large amount of students coming in a short period time.”

As a result, all 20 school districts agreed to new oversight policies to ensure all children are allowed to enroll.

Experts refer to the school crisis as an uneven story because some school districts are faring better than others.

According to the Administration for Children and Families, a division of the Department of Health and Human Services, 51,349 children nationwide have been released to sponsors in 53 counties since October 2013. About 25 percent of those children ended up in five counties: Harris County in Texas, which includes Houston; Los Angeles County in California; Miami-Dade County in Florida; and Suffolk and Nassau Counties in Long Island New York.

All five counties are in states with the largest Hispanic populations in the country.

In Houston, a city that has become accustomed to dealing with unaccompanied minors, the influx of children from Central America jumped nearly 200 percent last summer, to about 2,000 students, according to the Houston Independent School District, the seventh largest school district in the country. It normally received about 200 new students.

The district, which has 215,200 students – about a third of them English learners – tried to prepare itself by adding English as a Second Language to the curriculum. But its foresight was not enough – last year’s surge brought thousands of new students to the district and seemed to shock the system.

“It’s a challenge because most of our students are coming at the secondary level where the timeline for being ready for graduation is certainly shorter, and they have to live up to the same requirements for state, federal, and course assessments – all of which are in English,” Gracie Guerrero, assistant superintendent for multilingual programs at the Houston Independent School District, told Fox News Latino.

In Florida, Miami Jackson High School in Miami-Dade County is finding a way to graduate unaccompanied minors – despite the slim chance these kids have to succeed under the current conditions.

There are about 150 unaccompanied minors at Miami Jackson and 21 graduated this June. Last year, 17 graduated. Some of the students came as late as 10th or 11th grade and found a way to earn their diploma.

Miami Jackson Principal Carlos Rios attributes the success to teachers who are used to teaching the population and who are backed by a supportive school district.

Laura Salinas, 18, graduated in June after arriving from Honduras in 2012. Salinas, who did not know English when she arrived in South Florida, plans to attend Miami Dade College this fall.

“I came to the United States because my mother [brought] me here, because she tell me here there are better opportunities,” she said. “My dream is to continue to study, of course, and finish my college and study to become a veterinarian.”

Rios, the principal, said each minor that entered the country is unique and comes with a different background and experience – but their dreams are the same.

“They all want to come here to be successful, to be able to help their families,” Rios said. “And, at the end of the day, I think that's what's really helped these students become successful and graduate in such a short time.”

READ PART 5: The perilous corridor to the U.S. slowly clearing out