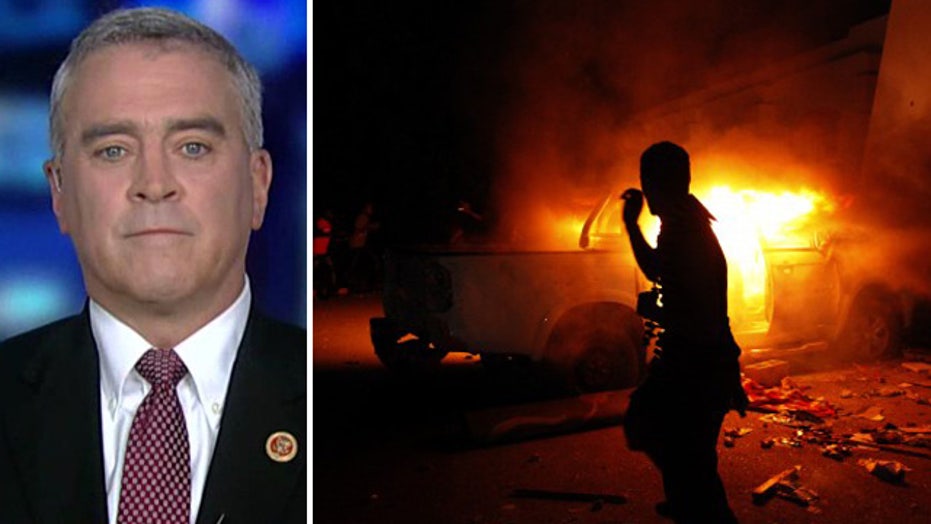 Minutes after the American consulate in Benghazi came under assault on Sept. 11, 2012, the nation's top civilian and uniformed defense officials -- headed for a previously scheduled Oval Office session with President Obama -- were informed that the event was a "terrorist attack," declassified documents show. The new evidence raises the question of why the top military men, one of whom was a member of the president's Cabinet, allowed him and other senior Obama administration officials to press a false narrative of the Benghazi attacks for two weeks afterward.

Gen. Carter Ham, who at the time was head of AFRICOM, the Defense Department combatant command with jurisdiction over Libya, told the House in classified testimony last year that it was him who broke the news about the unfolding situation in Benghazi to then-Defense Secretary Leon Panetta and Gen. Martin Dempsey, the chairman of the Joint Chiefs of Staff. The tense briefing -- in which it was already known that U.S. Ambassador to Libya Christopher Stevens had been targeted and had gone missing -- occurred just before the two senior officials departed the Pentagon for their session with the commander in chief.

According to declassified testimony obtained by Fox News, Ham -- who was working out of his Pentagon office on the afternoon of Sept. 11 -- said he learned about the assault on the consulate compound within 15 minutes of its commencement, at 9:42 p.m. Libya time, through a call he received from the AFRICOM Command Center.

"My first call was to General Dempsey, General Dempsey's office, to say, 'Hey, I am headed down the hall. I need to see him right away,'" Ham told lawmakers on the House Armed Services Subcommittee on Oversight and Investigation on June 26 of last year. "I told him what I knew. We immediately walked upstairs to meet with Secretary Panetta."

Ham's account of that fateful day was included in some 450 pages of testimony given by senior Pentagon officials in classified, closed-door hearings conducted last year by the Armed Services subcommittee. The testimony, given under "Top Secret" clearance and only declassified this month, presents a rare glimpse into how information during a crisis travels at the top echelons of America's national security apparatus, all the way up to the president.

Also among those whose secret testimony was declassified was Dempsey, the first person Ham briefed about Benghazi. Ham told lawmakers he considered it a fortuitous "happenstance" that he was able to rope Dempsey and Panetta into one meeting, so that, as Ham put it, "they had the basic information as they headed across for the meeting at the White House." Ham also told lawmakers he met with Panetta and Dempsey when they returned from their 30-minute session with President Obama on Sept. 11.

Armed Services Chairman Howard "Buck" McKeon, R-Calif., sitting in on the subcommittee's hearing with Ham last June, reserved for himself an especially sensitive line of questioning: namely, whether senior Obama administration officials, in the very earliest stages of their knowledge of Benghazi, had any reason to believe that the assault grew spontaneously out of a demonstration over an anti-Islam video produced in America.

Numerous aides to the president and then-Secretary of State Hillary Clinton repeatedly told the public in the weeks following the murder of Ambassador Stevens and three other Americans that night -- as Obama's hotly contested bid for re-election was entering its final stretch -- that there was no evidence the killings were the result of a premeditated terrorist attack, but rather were the result of a protest gone awry. Subsequent disclosures exposed the falsity of that narrative, and the Obama administration ultimately acknowledged that its early statements on Benghazi were untrue.

"In your discussions with General Dempsey and Secretary Panetta," McKeon asked, "was there any mention of a demonstration or was all discussion about an attack?" Ham initially testified that there was some "peripheral" discussion of this subject, but added "at that initial meeting, we knew that a U.S. facility had been attacked and was under attack, and we knew at that point that we had two individuals, Ambassador Stevens and Mr. [Sean] Smith, unaccounted for."

Rep. Brad Wenstrup, R-Ohio, a first-term lawmaker with experience as an Iraq war veteran and Army reserve officer, pressed Ham further on the point, prodding the 29-year Army veteran to admit that "the nature of the conversation" he had with Panetta and Dempsey was that "this was a terrorist attack."

The transcript reads as follows:

WENSTRUP: "And you would have advised as such if asked. Would that be correct?"

HAM: "Well, and with General Dempsey and Secretary Panetta, that is the nature of the conversation we had, yes, sir."

Panetta told the Senate Armed Services Committee in February of last year that it was him who informed the president that "there was an apparent attack going on in Benghazi." "Secretary Panetta, do you believe that unequivocally at that time we knew that this was a terrorist attack?" asked Sen. Jim Inhofe, R-Okla. "There was no question in my mind that this was a terrorist attack," Panetta replied.

Senior State Department officials who were in direct, real-time contact with the Americans under assault in Benghazi have also made clear they, too, knew immediately -- from surveillance video and eyewitness accounts -- that the incident was a terrorist attack. After providing the first substantive "tick-tock" of the events in Benghazi, during a background briefing conducted on the evening of Oct. 9, 2012, a reporter asked two top aides to then-Secretary Clinton: "What in all of these events that you've described led officials to believe for the first several days that this was prompted by protests against the video?"

"That is a question that you would have to ask others," replied one of the senior officials. "That was not our conclusion."

Ham's declassified testimony further underscores that Obama's earliest briefing on Benghazi was solely to the effect that the incident was a terrorist attack, and raises once again the question of how the narrative about the offensive video, and a demonstration that never occurred, took root within the White House as the explanation for Benghazi.

The day after the attacks, which marked the first killing of an American ambassador in the line of duty since 1979, Obama strode to the Rose Garden to comment on the loss, taking pains in his statement to say: "We reject all efforts to denigrate the religious beliefs of others." As late as Sept. 24, during an appearance on the talk show "The View," when asked directly by co-host Joy Behar if Benghazi had been "an act of terrorism," the president hedged, saying: "Well, we're still doing an investigation."

The declassified transcripts show that beyond Ham, Panetta and Dempsey, other key officers and channels throughout the Pentagon and its combatant commands were similarly quick to label the incident a terrorist attack. In a classified session on July 31 of last year, Westrup raised the question with Marine Corps Col. George Bristol, commander of AFRICOM's Joint Special Operations Task Force for the Trans Sahara region.

Bristol, who was traveling in Dakar, Senegal when the attack occurred, said he received a call from the Joint Operations Center alerting him to "a considerable event unfolding in Libya." Bristol's next call was to Lt. Col. S.E. Gibson, an Army commander stationed in Tripoli. Gibson informed Bristol that Stevens was missing, and that "there was a fight going on" at the consulate compound.

WESTRUP: "So no one from the military was ever advising, that you are aware of, that this was a demonstration gone out of control, it was always considered an attack -"

Staffers on the Armed Services subcommittee conducted nine classified sessions on the Benghazi attacks, and are close to issuing what they call an "interim" report on the affair. Fox News reported in October their preliminary conclusion that U.S. forces on the night of the Benghazi attacks were postured in such a way as to make military rescue or intervention impossible -- a finding that buttresses the claims of Dempsey and other senior Pentagon officials.

While their investigation continues, staffers say they still want to question Panetta directly. But the former defense secretary, now retired, has resisted such calls for additional testimony.

"He is in the president's Cabinet," said Rep. Martha Roby R-Ala., chair of the panel that collected the testimony, of Panetta. "The American people deserve the truth. They deserve to know what's going on, and I honestly think that that's why you have seen -- beyond the tragedy that there was a loss of four Americans' lives -- is that  the American people feel misled."

"Leon Panetta should have spoken up," agreed Kim R. Holmes, a former assistant secretary of state under President George W. Bush and now a distinguished fellow at the Heritage Foundation. "The people at the Pentagon and frankly, the people at the CIA stood back while all of this was unfolding and allowed this narrative to go on longer than they should have."

Neither Panetta's office nor the White House responded to Fox News' requests for comment.