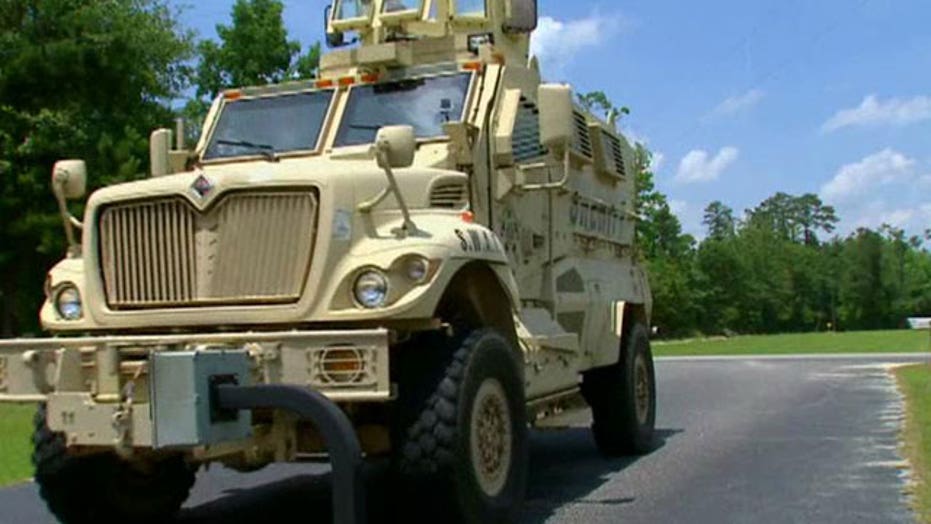 “But if it exceeds our needs, then it will obviously meet our needs,” explained sheriff’s Capt. John Crouse, adding that his county didn’t have to pay a dime for the Mine-Resistant Ambush Protected (MRAP) vehicle.

That's because at the end of the Iraq and Afghanistan wars, the U.S. military is offering surplus equipment to trusted agencies and governments on an “as is/where is” basis. Due to the high cost of shipping the equipment, such as MRAPs, many of those already overseas are being offered to allies in the region.

Still, hundreds of MRAPs are available stateside, and being offered up to local police forces.

The vehicle Florence County acquired had been used for training.

“They’ve saved countless lives for our forces on the battlefield,” said Alan Estevez, principal deputy under secretary of defense for acquisition, technology and logistics. “And if local law enforcement can use them, it’s a benefit to the taxpayer.”

The military-transfer program has allowed police departments on tight budgets to obtain equipment ranging from binoculars to M16 rifles.

But the program also has its critics, who say arming police with military-grade equipment blurs the lines between cops and soldiers and encourages unnecessary confrontations and injuries.

“The military is trained to search and destroy — to go find the enemy and subdue them,” said Tim Lynch, director of the Project on Criminal Justice with the Cato Institute, a libertarian think thank. “What we want from our civilian police departments is to use the absolute minimum amount of force that may be necessary in some cases to bring a suspect into a court of law, where disputes can be resolved peacefully.”

While some police agencies using military equipment have faced pushback from the communities they serve, Florence County authorities say their MRAP has been well received because they use it judiciously. It’s been called into action three times over the year they’ve had it — once to respond to a barricaded gunman, and two times to stage offsite as backup while deputies were serving high-risk warrants.

“It’s totally defensive,” said Capt. Crouse. “There are no weapons on it at all. It’s a big heavy truck that just stops bullets.”