JOBS AND WAGES SURGE IN APRIL

The stats only bolstered the president's economy-focused message as he gears up for what is sure to be a grueling 2020 re-election fight. As Democrats increasingly make the election about the president's character and controversies, the string of positive jobs reports are complicating any efforts to expand that message to run on more traditional kitchen-table issues.

"I'll be running on the economy," Trump said flatly, speaking to reporters at the White House Friday.

Trump's campaign was quick to tout the numbers as well, with press secretary Kayleigh McEnany declaring "the era of low expectations for American workers and their families is long over thanks to the Trump economy." 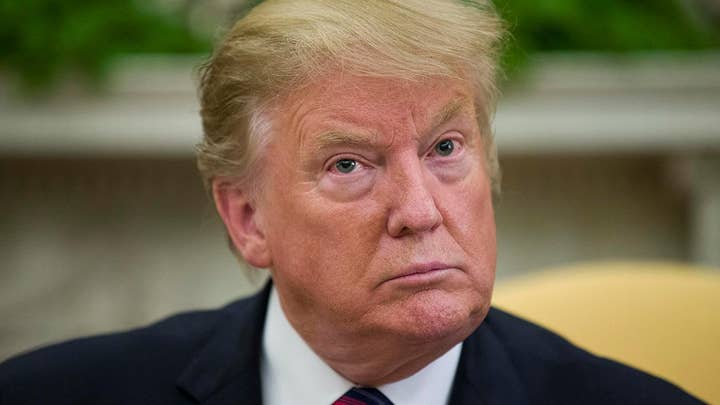 She added in a statement, "With this kind of momentum, we look forward to hearing the economic plans of the Democrats as they spin tales about Americans not feeling the results of the Trump economy, when in fact workers everywhere can feel the boom!”

The unemployment rate fell to 3.6 percent with the latest report. While part of that drop was due to an increased number of Americans who've stopped looking for work, the jobless rate is at its lowest level since 1969.

Also of note: the average hourly pay for workers jumped 3.2 percent from a year ago, which is considered a very healthy increase by economists.

The new numbers appear to put to rest fears earlier this year that the economy was heading toward recession. And they extend the nation's nearly decade-long recovery from the Great Recession. That economic recovery, which started during then-President Barack Obama's administration, is expected to become the longest in the nation's history come July.

The president touted on Twitter that "we can all agree that AMERICA is now #1. We are the ENVY of the WORLD — and the best is yet to come!" as he re-tweeted a Drudge Report headline that read "ENVY OF THE WORD. UNEMPLOYMENT 49-YEAR LOW."

While Trump spotlighted the new economic report, the news appears to make it a tougher sell for the 2020 Democratic presidential nomination contenders on the economy, which remains a leading issue for voters.

Many of the leading Democratic presidential candidates passed on reacting to the Labor Department's report.

But former Colorado Gov. John Hickenlooper, taking aim at Trump, argued that "nobody should be beating their chest over that ... We've got a long way to go."

Hickenlooper, speaking with Fox News in the first-in-the-nation primary state of New Hampshire before unveiling his own plans to boost the economy, admitted that "certainly we're making progress and that's great." But he added, "is it fast enough for most Americans? I don't think so."

McEnany boasted that "the new jobs report is further proof that the Trump economy continues to boom and deliver benefits that all Americans are feeling."

Her statement was an implicit shot at many of the leading Democratic contenders, who've continuously slammed the president as they argue the Trump tax cuts and the economic recovery have only benefited the wealthy and large corporations.

“The stock market is roaring. But you don’t feel it. There was a $2 trillion tax cut last year. Did you feel it? Did you get anything from it?” Biden asked, as the audience packed into a union hall chanted, "No."

Sen. Bernie Sanders of Vermont, a top rival for the Democratic nomination, wrote in an opinion piece for Fox News last month that "in America today, we have more wealth and income inequality than any other major country on Earth and it is worse now than at any other time since the 1920s."

And the independent senator from Vermont, who's making his second straight White House run, vowed to fight for "an economy that expands the middle class and reduces poverty and not one that makes the very rich much richer."

Another progressive contender for the nomination, Sen. Elizabeth Warren of Massachusetts, repeatedly spotlights that the 2020 election "is our chance to dream big, to fight hard, and to make this an America that works not just for the rich and the powerful but an America that works for everyone.”

Veteran New Hampshire-based political scientist Wayne Lesperance said that "challengers to the president are working hard to craft a narrative that elevates their stature and defines the president as not deserving a second term. Part of the strategy is to reframe the president’s strengths as illegitimate."

Lesperance, vice president of academic affairs at New England College, stressed that "the fact is economic growth and job creation are stronger than expected and impact all Americans positively."

"Harry Truman’s famous maxim that the buck stops here is as true in good economic times as bad. President Trump is the beneficiary of a surprisingly strong and growing economy. And if the past is prologue, American voters will reward the president as they continue to vote with their pocketbooks," he added.

The release of the report comes just two days after a new national poll by CNN indicated Trump had hit a new high on his economic approval ratings, with 56 percent of those questioned saying the president's doing a good job on the economy. CNN's polling, though, also showed numerous Democratic candidates including Sanders, Biden and former Texas Rep. Beto O'Rourke beating Trump in head-to-head matchups.

While there's plenty for Trump to brag about and a good narrative for him to tell, there's no guarantee he'll stay on message. Republicans in Congress urged the president to spotlight the economy and the tax cuts during the 2018 midterm elections, but he often drifted to other issues as he stumped for GOP candidates.

Some pundits question whether the 2020 election will see an electorate focused on the economy, or on values.

White House acting chief of staff Mick Mulvaney thinks the economy will win out over all the controversies that have consumed the Trump presidency.

Spelling out the president's 2020 economic message, Mulvaney on Tuesday suggested voters would still be willing to support Trump at the ballot box even if they don't like him personally.

"You hate to sound like a cliché, but are you better off than you were four years ago? It's pretty simple, right? It's the economy, stupid. I think that's easy. People will vote for somebody they don't like if they think it's good for them," Mulvaney said as he spoke at the Milken conference in Los Angeles.