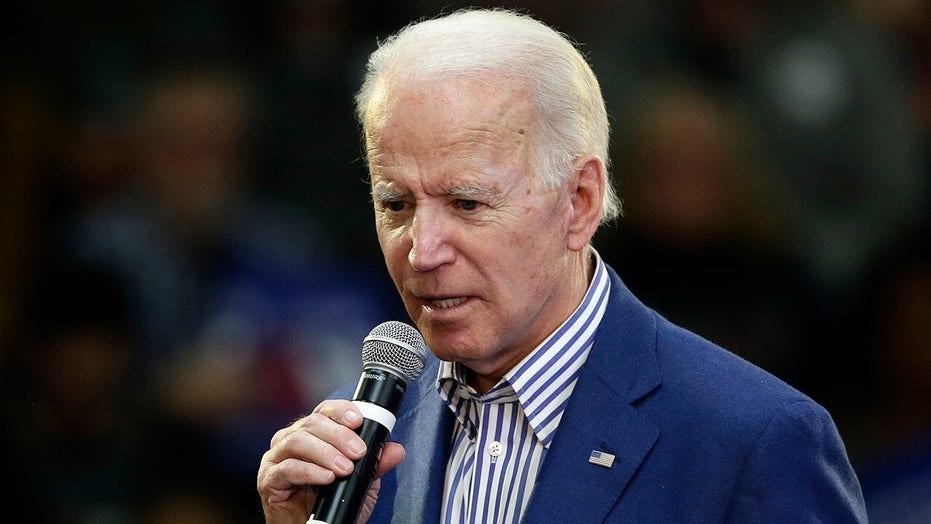 Biden eyes moderate votes after Buttigieg drops out of 2020 race

Moderate voters up for grabs ahead of Super Tuesday; Fox News contributors Jessica Tarlov and Katie Pavlich weigh in.

Joe Biden may or may not have pulled off a Bill Clinton-style recovery for his primary campaign, but at least for now, the political stars are aligning for the Democratic presidential candidate who was all but counted out after failing to win any of the first three contests. Now, after dominating the South Carolina primary and seeing his rivals bow out to endorse him, Joe Biden is ready to position himself as the "moderate" alternative to democratic socialist Bernie Sanders as Super Tuesday arrives.

"I am very much alive," he told supporters on Monday, in case they needed reminding.

Perhaps the clean bill of health for his campaign was worth stating. The former vice president was the front-runner in the Democratic presidential primary for months before he and his gaffe-prone campaign steadily slid down in the polls, being overshadowed by several candidates with better funding, more polish or more apparent grassroots excitement.

But now, on the morning of Super Tuesday, Biden is riding high off a decisive win in South Carolina, a surge in high-profile endorsements and fundraising, two disastrous debates for Mike Bloomberg and two of his other top rivals dropping out on consecutive days -- only to get behind his campaign.

"It’s a big boost,” Biden said of his South Carolina victory in an interview with Chris Wallace on "Fox News Sunday." “I think it starts the real comeback and we picked up a lot of delegates."

The candidate is still gaffe-prone -- he caught himself Monday accidentally referring to "Super Thursday" and botched a recitation of part of the Declaration of Independence. But for the time being, his candidacy seems to have the faith of the establishment once more.

When Biden entered the 2020 presidential race last April he was seen not just as the front-runner in a field of strong candidates, but the almost inevitable nominee. He was the vice president to the first black president -- and former President Barack Obama's popularity was, and remains, sky-high in the Democratic party.

Liberal commentator Leslie Marshall laid out her case for Biden in an opinion piece on FoxNews.com when he first announced.

"He has decades of experience. He is liked and respected by both Democrats and Republicans. And he is most likely the only candidate, in my opinion, who can defeat President Trump in November 2020," Marshall wrote of Biden. "He is also the only Democrat who has a truly proven progressive record among the wide array of candidates running."

Marshall also mentioned Biden's sense of humor and ability to beat Trump at his own game, his support among blue-collar voters, his centrism, his "no malarkey" style, and more as reasons why Biden should be the Democratic nominee.

And so, as the presidential campaign dragged on through chaotic summer debates, a fall winnowing of the field, the Trump impeachment hearings and later an impeachment trial, Biden remained the front-runner. He hovered mostly between the 26 percent and 32 percent support in the RealClearPolitics average from April until February. Sen. Elizabeth Warren, D-Mass., only briefly surpassed him for first place in the polls in October before quickly tumbling down to third and then fourth place in the national race.

But then, coinciding with the rapid rise of Bloomberg's well-financed campaign machine and Vermont Sen. Bernie Sanders' breakthrough as the front-runner with a strong performance in Iowa and a win in New Hampshire, Biden became almost an afterthought.

The former vice president finished fourth in Iowa and fifth in New Hampshire. His support in national polls, according to the RealClearPolitics average, bottomed out in the mid-teens. Democratic voters seeking a candidate for what has been called the "moderate lane" of the primary -- in other words, not Sanders or Warren -- gave a serious look to former South Bend, Ind., Mayor Pete Buttigieg after his apparent win in Iowa and Sen. Amy Klobuchar, D-Minn., after her surprisingly strong finish in New Hampshire.

At the same time, Sanders was drawing Trumpian crowds to his rallies and roiling Democratic commentators who worried he couldn't beat Trump but weren't sure how Sanders could be stopped without major changes in the race.

Commentators speculated that the drop in support for the former VP might have been because of Biden's age, the fact he and his son Hunter were swept up in controversies relating to Trump's impeachment trial, his habit of misspeaking on the campaign trail or a number of other reasons.

As it seemed like everything was going wrong for Biden, suddenly, everything started going right.

At the Nevada presidential debate, Warren went for Bloomberg's jugular on his history of having women sign nondisclosure agreements related to sexual harassment while the rest of the field followed her lead -- thus leaving Biden to make his case without any incoming attacks.

In Nevada, Biden placed a distant second behind Sanders with Buttigieg the only other candidate in double-digits.

Then last week, Biden put in another serviceable debate performance ahead of South Carolina while the other candidates still attacked Bloomberg; secured the endorsement of House Majority Whip Jim Clyburn, D-S.C., who is highly influential in South Carolina; was backed by several other high-profile Democrats including Virginia Sen. Tim Kaine; and decisively won the South Carolina primary with almost 50 percent of the vote.

It got better yet for Biden.

Saturday, billionaire Tom Steyer, who finished third in South Carolina, dropped out of the race.

Sunday, Buttigieg, who finished fourth in South Carolina, did so as well.

Monday, news broke that Klobuchar was also dropping out of the presidential race -- to endorse Biden.

As Democratic voters in 14 states head to the polls Tuesday to have their say on who should be the next president of the United States, the race is significantly different than when South Carolina voters cast their ballots Saturday.

In effect, there are now only four serious candidates in the Democratic presidential primary -- Sanders, Biden, Warren and Bloomberg.

Warren has yet to finish in the top-two in any state and hasn't cracked the top-three since Iowa. Bloomberg's initial momentum seems to have cooled off. And though he has the money to run a campaign through the July convention, it's unclear there is a broad enough group within the Democratic party willing to support the billionaire former Republican with a history of sexual harassment and racism allegations -- especially if Biden looks more likely to beat Sanders anyways.

Looming on the horizon now is a potential heavyweight slugfest through the primary calendar between Biden and Sanders with an outcome that's far from clear. Only 4 percent of the total delegates have been assigned -- with another 34 percent to come on Super Tuesday -- meaning more half of the Democratic nominating contest will still lay ahead.

With support for Biden that might exceed his poll numbers following the endorsements from Buttigieg and Klobuchar, there is a chance that Sanders' delegate lead following the biggest day of the primary campaign will not be as large as it was previously predicted to be.

"[The] establishment is nervous not because we can't beat Trump but because we will," Sanders campaign manager Faiz Shakir told Fox News. "And when we do, the Democratic Party will again be a party of the working class."

Meanwhile, Biden staffers touted well over a dozen significant Biden endorsements that came in just on Monday from officials across the country.

"Follow this thread of new @JoeBiden endorsements - they are pouring in from across the country," Biden campaign manager Greg Schultz tweeted. "The party is coming together to defeat Trump."

As she dropped out of the presidential race and endorsed Biden Monday, Klobuchar preached that same message of unity.

"We need to unite our party and our country, and to do it not just with our words but with our actions," she said. "It is up to us, all of us, to put our country back together, to heal this country, and then to build something even greater.