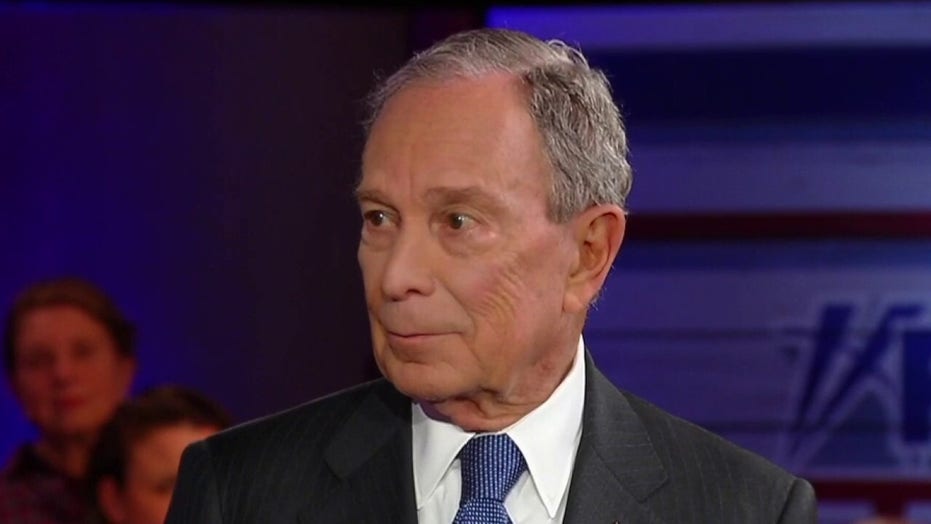 Democratic 2020 presidential candidate Michael Bloomberg discusses his qualifications to be president, his path to the nomination and how a Bloomberg administration would have responded to the coronavirus outbreak with moderators Bret Baier and Martha MacCallum in Manassas, Virginia.

Former New York City Mayor Michael Bloomberg, speaking at a Fox News Town Hall in Manassas, Va., on the eve of Super Tuesday's pivotal contests, remarked matter-of-factly that he could ultimately win his party's nomination for president through "horse trading" and "deals" at a contested Democratic National Convention this summer.

Bloomberg, who will be on the ballot Tuesday for the first time this primary season, made the comments amid new turmoil in the presidential contest. With rivals Pete Buttigieg and Amy Klobuchar now abruptly out, Joe Biden has consolidated support among establishment Democrats hoping to present a more centrist alternative to democratic socialist Bernie Sanders.

"The most likely scenario for the Democratic Party is no one has a majority -- it goes to a convention where there's horse trading; there's compromise," Bloomberg said. "It doesn't even have to be the leading candidate; it could be the one with a smaller number of delegates."

Pressed by "Special Report" anchor Bret Baier and "The Story" anchor Martha MacCallum, Bloomberg noted that party rules require candidates to obtain a majority, not plurality, of delegates to win the nomination -- and permit "superdelegates," or party insiders, to weigh in if no candidate obtains a majority on the first ballot. 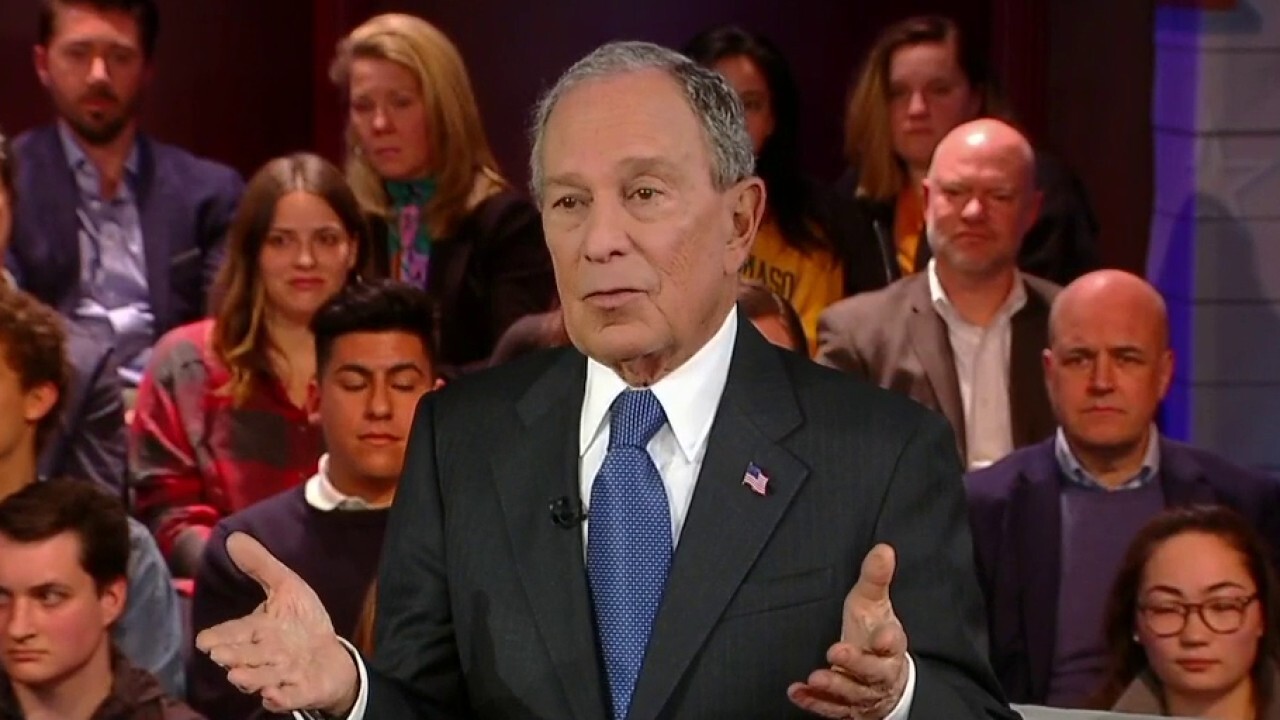 Bloomberg's strategy mirrored the plan outlined this weekend by Elizabeth Warren, whose campaign manager has called a contested convention the "final play" for her bid for the presidency.

"Look, I haven't even faced the voters once in the national level, so tomorrow will be the first day," Bloomberg said, asked whether he would consider dropping out of the race like Klobuchar and Buttigieg.

Bloomberg has shown no signs of dropping out, regardless of what happens on Super Tuesday. His campaign released a schedule of public events for the rest of the week on Monday, and he assured cheering supporters, "I'm in it to win it." 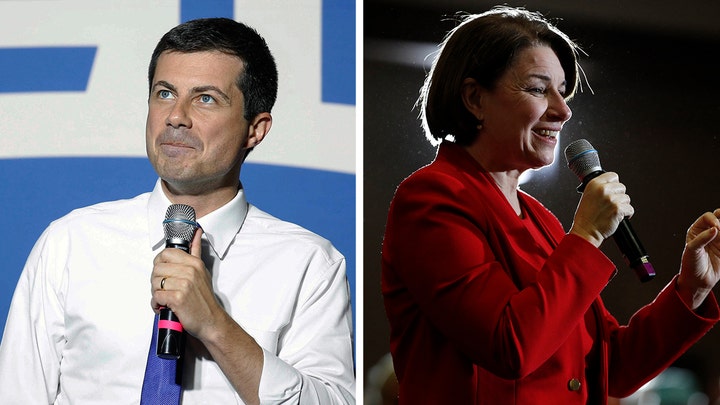 KLOBUCHAR, BUTTIGIEG TO UNITE BEHIND BIDEN

Also at the Fox News Town Hall, a voter, Daniel Rivera, said Bloomberg's stop-and-frisk policy "hurt a lot of people in New York." After inaccurately suggesting that President Trump has called racists "good people," Rivera asked Bloomberg why it wouldn't be acceptable to call him a racist, too.

Even as he apologized for the policy, Bloomberg responded by denying that stop-and-frisk was racist, saying officers were securing "crime scenes" and other dangerous areas by patting down individuals who reasonably might have a weapon -- a form of search that the Supreme Court has approved in other situations, even as the particular implementation of stop-and-frisk in New York was ruled unconstitutional by a lower court.

"The whole idea is to keep people from carrying guns," Bloomberg said. "Every big police department will continue to do this, because you just have to make sure there's no guns."

Pressed later on why he had an armed security detail even as he pushed for others not to have firearms -- a question that prompted sustained applause in the audience -- Bloomberg insisted his situation is unique.

"I probably get 40 or 50 threats per week, and some of them are real," Bloomberg shot back. "I have a security detail; I pay for it all myself. They're all retired police officers who are very well training in firearms. ... The Second Amendment gives you the right to bear arms. ... Nobody's gonna take away your right to bear arms."

But, Bloomberg said, "reasonable restrictions" are constitutionally appropriate, including prohibiting sales to minors, criminals, or those with psychiatric issues.

That answer apparently wasn't entirely satisfactory, as several audience members rose in protest and briefly interrupted the event as security rushed in.

"We have a lively crowd, as you can see," MacCallum said when the Town Hall resumed, as Baier noted that "multiple protests" had been underway at once.

Following the event, a Bloomberg campaign aide told Fox News: "Clearly he [Bloomberg] is a moderate who was protested by the right and the left."

Separately, in response to a question about Amazon's tax payments, Bloomberg lamented that young people aren't buying as much clothing with "monogramming" as they used to; instead, Bloomberg said, people are buying and returning clothes.

Multiple times through the event, Bloomberg broadly said he agreed with some of Trump's policies, including his tough approach to China on trade and his killing of a top Iranian general, but disagreed with his implementation of them. Bloomberg emphasized his expertise in management, by way of contrast with his remaining rivals' legislative careers.

"My skills are what I think is necessary for this job and also -- not to make light of it, but I think I know how to campaign against Donald Trump, and that I would be able to attract moderate Republicans, who like some of Trump's policies but don't necessarily like him," Bloomberg said.

In the main, the Fox News Town Hall was a continuation of Bloomberg's messaging from earlier in the day. Speaking at a canvass kickoff in Manassas, Bloomberg told the crowd in reference to his past mayoral elections, “I’ve won three elections so far. I don’t plan to start losing now!” He has poured more than a half billion dollars into the Super Tuesday states.

He told the crowd that he had spoken to Buttigieg and Klobuchar, both of whom exited the race within the last 24 hours. He said that he “wished them all the best” and that both of them “behaved themselves” and “represented their country and their states very well.”

Buttigieg and Klobuchar are said to be planning to endorse Biden Monday night. 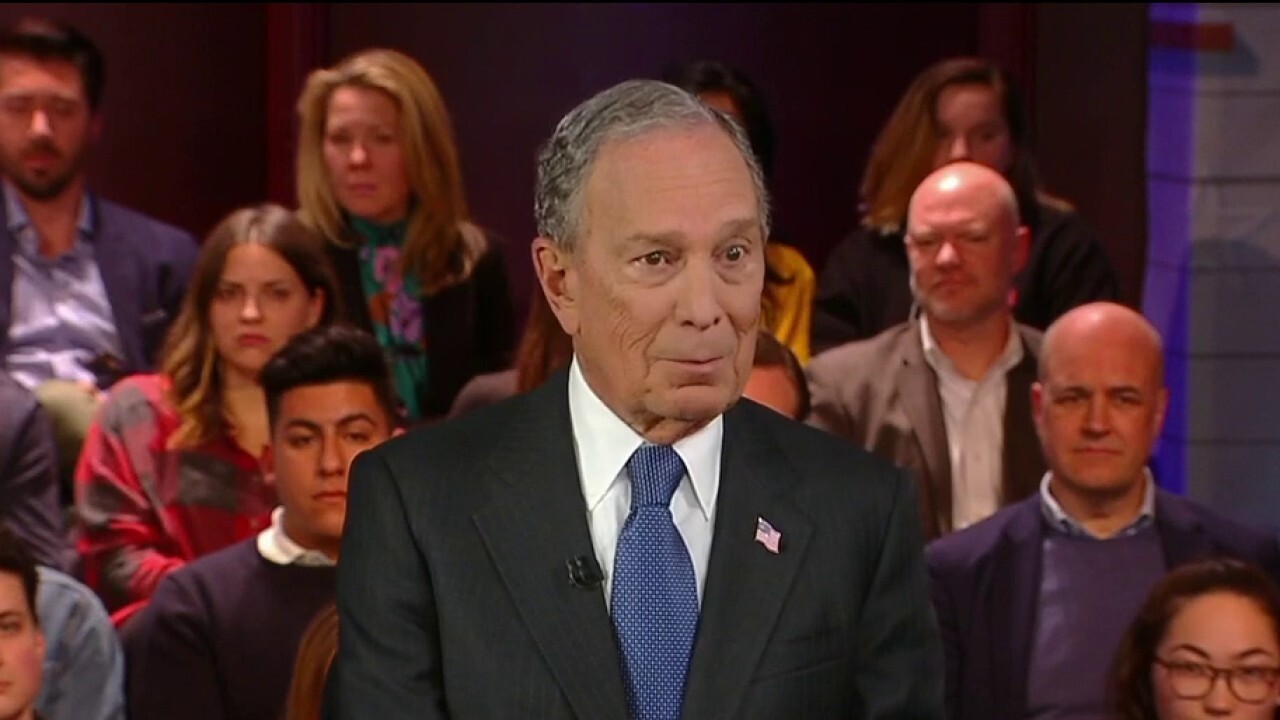 Former Nevada Sen. Harry Reid, for his part, remarked: “I believe Biden is best able to defeat Donald Trump and enact the policies we all care about.”

“It’s becoming increasingly clear that the candidates funded by big money and super PACs are coalescing behind Joe Biden, and that’s not a surprise," Sanders' senior strategist Jeff Weaver said. "I think it’ll add a lot of clarity to this race.”

But, despite his endorsements and win by a massive margin in South Carolina's primary on Saturday, Biden remains vulnerable on a variety of fronts, including his repeated gaffes. On Monday, he slipped up twice during a rally -- at one point, badly garbling the Declaration of Independence before giving up, and at another, saying "Super Thursday" was coming up.

In Silicon Valley, which dominated by the tech sector, many wealthy donors prioritize executing a data-driven plan -- and Biden’s rocky campaign pushed many toward Buttigieg or Bloomberg in recent months, financiers say.

Biden's team is waging a quiet campaign to win them over, yet many are taking a wait-and-see approach.

“We need to see what happens tomorrow, which is going to be very telling," said Alex Sink, a Democratic donor and former Florida gubernatorial candidate who endorsed Bloomberg.

At Monday's gaffe-riddled rally, Biden notably didn't take any shots at Bloomberg and instead aimed his barbs at Sanders -- in an apparent sign that Bloomberg isn't viewed as a significant threat.

In a dig at Sanders' signature call to action, the former vice president said, "Most Americans don’t want a promised revolution. They want guaranteed results."