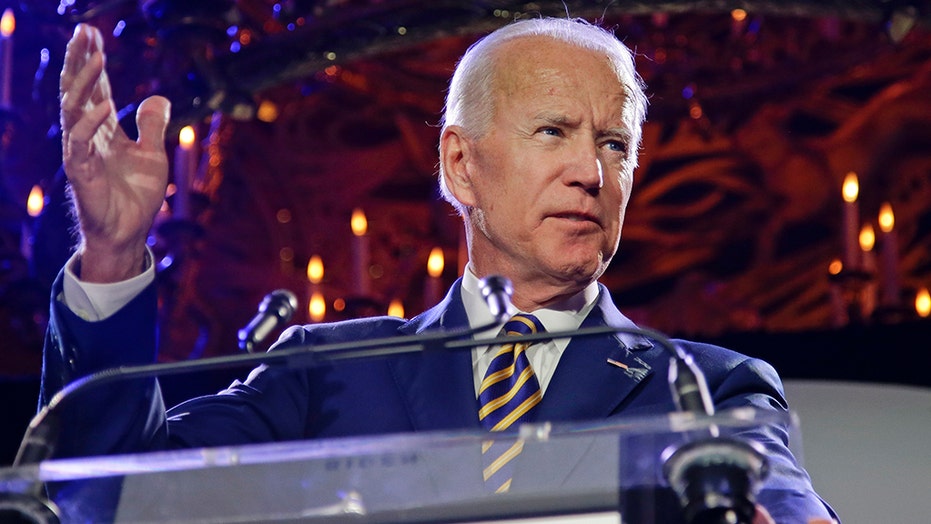 The endless “will he or won’t he” speculation is over. Former Vice President Joe Biden finally announced Thursday, via video, that he is running for the Democratic presidential nomination in 2020 – and that’s a good thing.

I know a lot of people will disagree. They wonder how “Creepy Joe” – as some of his critics have dubbed him – can win his party’s nomination in the age of the #MeToo movement, after accusations that he’s been inappropriately “touchy” with women over the years.

IS MIRRORING OBAMA AND CLINTON BIDEN'S BEST CHANCE AT VICTORY IN 2020?

First, let’s take a look at the women who have accused Biden of inappropriate contact.

When I was on “Fox News At Night” with Shannon Bream recently, even staunch conservative Dinesh D'Souza was leery of the timing of the first woman’s accusation.

Lucy Flores, the first woman to come forward, stated that while running for lieutenant governor in the state of Nevada, then-Vice President Biden allegedly smelled her hair and gave her a "big slow kiss" on the back of her head. In that moment, she wrote, she felt “embarrassed” and “shocked.”

None of Biden’s staff members remember the event as Flores has reported it, and many, on both the left and right, questioned Ms. Flores’ intentions, as she used to work for and support Senator Bernie Sanders. She also worked for a Sanders PAC after he lost the Democratic nomination. Laura Ingraham suggested Flores may have spoken out because she’d prefer a woman as the Democratic nominee for president rather than a man.

In response, Biden claimed that he had no memory of having “acted inappropriately,” but added that if he was in the wrong, he would “listen respectfully.”

Amy Lappos, a former aide to Congressman Jim Himes, D-Conn., claimed that Biden rubbed his nose against hers during a political fundraiser. She said “it wasn’t sexual” and did not report the incident.

Writer D.J. Hill said Biden put his hand on her shoulder and then down her back at a 2012 fundraiser. She admits she did not know his intent, but the incident made her feel uncomfortable.

Caitlyn Caruso felt Biden hugged her a bit too long at an event in Nevada focused on sexual harassment – after she had shared her story of being sexually assaulted.

Ally Coll, a Democratic staffer when she met Biden in 2008, said he squeezed her shoulders, complimented her smile and held her for a beat too long.

Sofie Karasek felt Biden “invaded her personal space” when they were forehead to forehead in a photo from the 2016 Oscars that went viral. Karasek was part of a group of 51 sexual assault survivors who appeared onstage with Lady Gaga.

Vail Kohnert-Yount claims she was a White House intern in 2013 when Biden pushed her forehead to his and called her a pretty girl.

Now I want to be clear. As a woman, I feel all women should be believed. But there are even strong conservatives who question the timing of these accusations. And it must be noted that none of the women who have felt ‘uncomfortable’ with former Vice President Biden have alleged sexual misconduct or touching that was sexual in nature.

Biden is also the only one running who can beat Trump at his own game. In a debate, if Trump lurks behind him as he did to Hillary Clinton, I could see Joe using the president as a prop, making light of it rather than ignore it (as Hillary did).

It also must be noted that there have multiple accusations of sexual assault against President Trump – dozens, by some reports – two of which are currently making their way through the courts. And there is of course that “Access Hollywood” tape with his infamous “grab em by the ….” remark.  In spite of all those accusations, he was elected president.

There are those who feel that Biden will not be able to get and keep the female vote.  I disagree.

Polls show that for independent female voters, 6 out of 10 view President Trump unfavorably. Even his support among Republican women has dropped over 20 points. And among women who were central to the president’s victory in 2016 – white women who don’t hold college degrees – more are now saying they strongly disapprove of him.

Now Joe does have other problems – all candidates do. His handling of the Anita Hill accusations against then-Supreme Court nominee Clarence Thomas, for one. His recent praise of Vice President Mike Pence followed by a quick back-peddling when actress and political activist Cynthia Nixon called him out on it.

Here is how I think he should handle these issues in order to get around them and truly be forgiven by the party:

-  He must personally apologize to Anita Hill – in person – and seek her forgiveness. He can then comment via media and online that the apology has been made and accepted. He must also highlight his track record on women’s issues in the years since.

- On current VP Mike Pence – Joe Biden likes Republicans. He’s said so. “Forgive me father for I have sinned….” were his comments about liking members of the GOP. While this might hurt him with some Democratic voters, it could help him win over independents who have no official party as their home, or Republicans who don’t like Trump or former Trump supporters who feel let down by the president.

Don’t forget – the former vice president has his strong points, too.

He has decades of experience. He is liked and respected by both Democrats and Republicans. And he is most likely the only candidate, in my opinion, who can defeat President Trump in November 2020.

I’ve written before about how Biden can shoot straight from the hip – in a “no malarkey” style that is similar to Trump’s. He has also, like the president, shown his bravado with statements such as taking someone “out behind the school and beating the crap out of him.”

He is also the only Democrat who has a truly proven progressive record among the wide array of candidates running.

And when I say progressive, I don’t mean socialist or far-left. That is another check mark in the win column for Biden; he’s the most palatable to the more centrist and moderate Democrats, which, are the majority of those in the Democratic Party.

Polls are on his side lately. He leads the pack (even before he announced) as the first among Democrats, followed by Bernie Sanders, California Senator Kamala Harris and former Texas Congressman Beto O’Rourke. Surprising to many, he also leads among millennials.

Biden’s positives outweigh his negatives in my opinion. I believe the accusations against him are different – both in nature and in severity – than those against President Trump.

Biden is also the only one running who can beat Trump at his own game.

In a debate, if Trump lurks behind him as he did to Hillary Clinton, I could see Joe using the president as a prop, making light of it rather than ignore it (as Hillary did).

Biden also does well with white blue collar working male voters – voters who did not support Hillary, and one of the reasons she lost.

Hillary’s refusal to court these disenfranchised voters – going against the advice of her husband, former President Bill Clinton – could in turn provide an opportunity for Biden. Many of these voters are now unhappy with promises President Trump has made and did not keep. Biden could very well be able to win them back, specifically in Wisconsin, Michigan and Pennsylvania, which in turn could help put the next Democratic nominee in the White House.

What about his age? I know. He’ll be 78 if he wins the presidency. But all of us are living longer, working until we are older, and even look better in our older years (thanks to diet, exercise and Botox!). Oh, and let’s not forget, 78 is the new 40!

Last, and certainly not least, Republicans view Biden as a threat and want to keep him from running. Most Republicans I know have told me that Biden (even with these accusations against him) is the biggest threat to Donald Trump.

More proof that Republicans are worried? The pro-Trump Great America PAC released an ad aimed at Joe Biden amid the accusations of sexual misconduct. Titled “Creepy Joe,” the ad depicts children watching Biden hug and touch various women while Lucy Flores’ interview on her experience runs in the background.

But the Republicans should be careful, as Democrats and their PAC’s can also come up with ads against the current president, with clip after clip of his remarks, tweets – and don’t forget the infamous Access Hollywood tape! – making disparaging remarks about women time and time again. Those in glass houses…

Biden’s positives outweigh his negatives in my opinion. I believe the accusations against him are different – both in nature and in severity – than those against President Trump. And I agree with Senator Chris Coons, D-Del., who, in a recent interview said, "I think it was important for Joe to say directly to the American people that he gets that social standards have changed... I think he'll be able to move forward at this point."

I believe the third time will be the charm, and for Joe Biden, I believe his time is now. He can become the Democratic nominee; he can unite the party; and he can win the support of the other Democrats running for president.

But most importantly of all, I believe he can fulfill the Democrats’ number one goal: to make Donald J. Trump a one-term president.