House Minority Whip Rep. Steve Scalise sits down with 'Fox &amp; Friends' at Nationals Park to discuss his recovery and return to the game.

Two years after being shot while practicing for the Congressional Baseball Game, Rep. Steve Scalise is feeling strong and confident ahead of this year's event on Wednesday evening.

Speaking with "Fox & Friends", the Louisiana Republican revealed that he's still struggling with his mobility after being shot by a left-wing activist at Eugene Simpson Stadium Park near Washington D.C. in 2017.

"It's been quite a road," he told Fox News' Carley Shimkus. "I can definitely feel how much better I am now, especially than last year. I'm still lucky to be alive but able to move around a whole lot better," he continued.

When 50 shots rang out at the field in 2017, Scalise, his two assigned safety officers that day, and lobbyist Matt Mika were all injured. The shooter, James Hodgkinson, was fatally shot by police.

Scalise, who still uses crutches to get around, credits his security guards with saving his life, as well as Rep. Brad Wenstrup, R-Ohio, who formerly worked as a trauma surgeon and quickly applied a tourniquet to stop Scalise's bleeding. Scalise's security, David Bailey and Crystal Griner, will both attend the 2019 Congressional Baseball Game on Wednesday, the congressman said.

When the shooting began, Scalise said he simply started to pray.

"It was amazing how that removed so much of the anxiety and all of a sudden I was calm, and I knew that God was taking care of me, and boy did he ever," he said.

The Republican Congressional Baseball Team's manager, Rep. Roger Williams, R-Texas, was also present on the day of the shooting in 2017. He said he's been working hard to prepare the politicians for this year's event, even starting off the day with 6 a.m. practices. 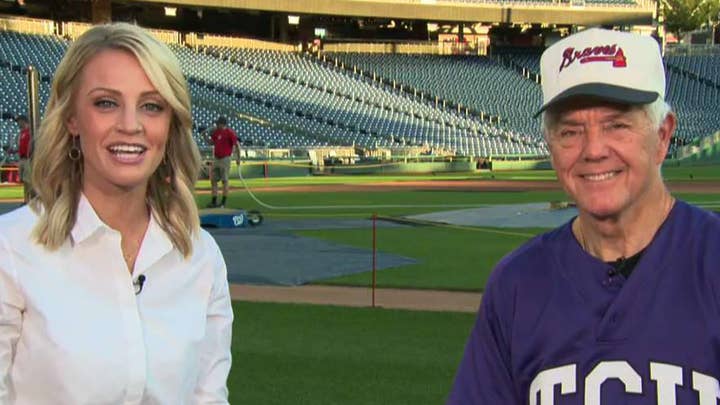 Williams surprised many by saying that when the shooting happened, he wasn't shocked.

"We have so much anger up here and division," he said. "I wasn't surprised that somebody lost it."

Wednesday's game will be a return to the sportsmanlike spirit and fun, he said, regardless of which team takes home the trophy.

"Win or lose, these guys have really worked hard," he said.