FILE - In this Aug. 27, 2018 file photo, House Majority Whip U.S. Rep. Steve Scalise, R-La., recalls the prayers he received after getting shot during a congressional baseball practice in Virginia in 2017, during a press availability in Jackson, Miss. Scalise says he still struggles to forgive the man who wounded him and four others at a congressional baseball practice nearly two years ago. (AP Photo/Rogelio V. Solis)

SCALISE: DEMOCRATS DON'T WANT YOU TO HEAR WHAT I HAVE TO SAY ABOUT GUNS AND THE SECOND AMENDMENT

Scalise was shot in the hip by gunman James Hodgkinson on June 14, 2017 after he opened fire on several federal lawmakers at a Virginia baseball field. Hodgkinson was later shot dead by Capitol police.

Scalise endured a long recovery and required surgery to repair some of the damage to his hip, but has always maintained an upbeat attitude and publically thanked God for protecting him. He also heaped praise on the officers who saved his life and said they've made the entire law enforcement community proud.

"I just want to say I'm so proud of Crystal and David because the whole detail that I get to know as a family -- they're family, look at them over there -- but they also, they have a job to do. And it's a job that allows us to just do what we do without thinking about protection because they're the ones thinking about it," he said.

"If they weren't out there that day, and risking their lives -- I mean y'all can be proud to know that the best of law enforcement was on display that day," Scalise continued.

"You make, not only the United States Capitol police proud but every man and woman who puts on a badge and goes and risks their life to protect communities can be proud to know that that day, the Capitol police were the epitome of what's great about law enforcement. Because they went out and risked their lives and faced a shooter that had a lot more ammunition -- a lot more firepower -- but they didn't have the resolve and the skill and the well-trained determination of these people who looked it down and said 'We're not going to back down. We're going to actually go out.' And we wouldn't be here if not for y'all." 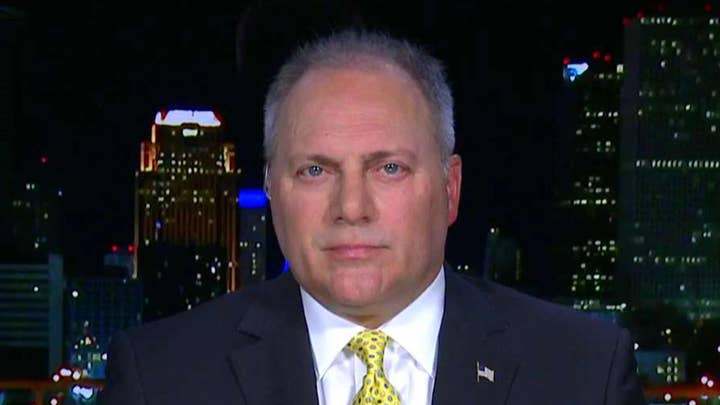 Scalise closed by thanking the officers for their service and said he's proud to see them back in action.

"You all made law enforcement proud around the country that day. And thank you. Thanks for your service, thanks for your sacrifice and [I'm] glad you're back. Both of them are back wearing this uniform," he said.

Fox News reached out to Scalise's office for comment and they confirmed he will be in attendance at this year’s game on the 26th and is "hoping to reclaim his starting spot at second base."