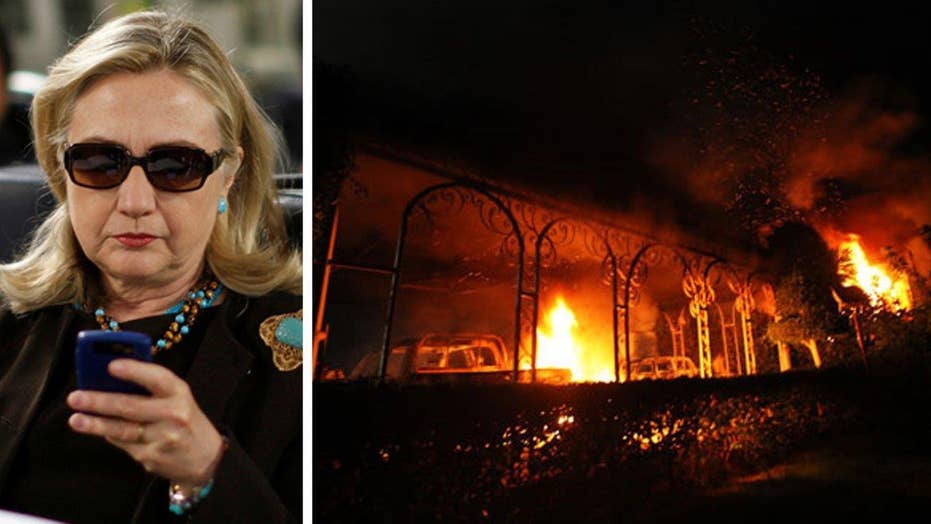 Does this show a cover-up in what the administration knew? Reaction on 'Outnumbered'

The State Department withheld a vital Hillary Clinton email for two years that would have exposed the existence of her private email server before she wiped it, a conservative watchdog claimed Tuesday.

“Upon further review, the Department has determined that one document previously withheld in full in our letter dated November 12, 2014 may now be released in part,” the letter, dated April 18, said.

The email in question was sent to Clinton from then-Deputy Chief of Staff Jake Sullivan and concerns talking points for a call with senators about the Sept. 11, 2012 Benghazi attack -- an attack that left four Americans dead.  The email contains Clinton’s non-state.gov address.

A State Department official called the delay an “administrative error” and added that they did not receive the email in question until July 2015 – after the Clinton email address was known."The Department regrets any confusion and will be sending corrected correspondence to Judicial Watch," the official told Fox News.

Judicial Watch requested records in a July 2014 Freedom of Information Act request related to the drafting of the talking points given to then-Ambassador Susan Rice in the aftermath of the attacks.

“Now we know the Obama administration consciously refused to give up key information about Hillary Clinton’s email in 2014.  It covered up this email both from the court and Judicial Watch,” Judicial Watch President Tom Fitton said in a statement. “This cover-up provided Hillary Clinton enough time to hide potentially thousands of government records.”

The fall of 2014 was a critical period in the email controversy as Clinton attorney David Kendall received the back-up thumb drives in December, and by that time it is believed as many as 30,000 emails – deemed personal by Clinton’s team – had been deleted.

Judicial Watch said the shifting explanations from the State Department explain why a federal judge is allowing Clinton’s close aides to be questioned about the emails and server as part of the litigation surrounding the FOIA request.