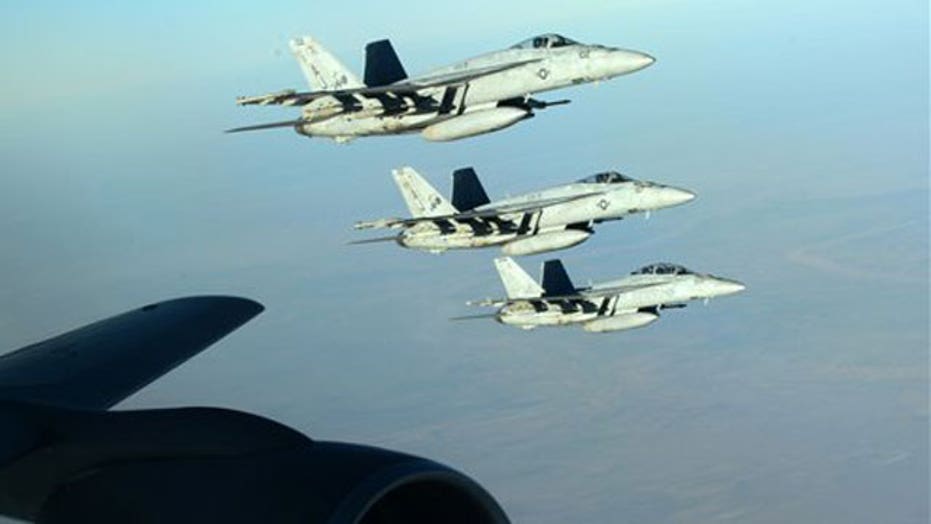 Coalition steps up airstrikes as ISIS advances on Kobani

The Facebook pages of an Air Force servicemember and his son were “swarmed” by offensive messages after Islamic State sympathizers urged followers to target them online, a source tells Fox News – a virtual attack that coincided with an Army bulletin warning ISIS may try to track down military families on social media.

The Army intelligence bulletin, obtained by Fox News, had warned that Islamic State militants were calling on supporters to scour social media for addresses of U.S. military family members and “show up [at their homes] and slaughter them." The assessment urged U.S. military personnel to be vigilant.

A counterterrorism source described to Fox News how one military family was targeted around the same time.

The source said that in late September, Islamic State sympathizers harassed an Air Force member who had posted pictures online from a flight over Iraq during a recent bombing campaign.

The source, who is familiar with the incident, said ISIS found the servicemember’s social media profile, and then linked it to his son’s Facebook account. The son is believed to be in his early teens. The ISIS sympathizers first saw the servicemember's pictures after they were posted to a military website, and then tracked them to his Facebook page.

The Facebook pages were then "swarmed" with derogatory messages such as kafir, or non-believer, in an online flash-mob-style attack.

"This is the real deal," the counterterrorism source said, referring to the posts. "They want to find them [U.S. military], raise their profile, in the eyes of a potential 'lone wolf.'"

The militants apparently encouraged others to join in the digital harassment.

A post on one ISIS-linked Twitter account, translated for Fox News, said: “We have a raid on an American pilot account at 9:00 evening Mecca time who is participating in the crusaders’ bombing. Retweet this if you are ready to be part of the raid.”

The father and son were not identified to Fox News for security reasons.

Fox News is told that the Department of Defense became aware of the incident, and shortly afterward, both Facebook accounts went dark.

A senior Defense official confirmed to Fox News that the harassment and threats ultimately triggered the Army intelligence bulletin.

The threat assessment from the Army’s Threat Integration Center was released in late September. The bulletin warned Army commands worldwide that servicemembers should limit the number of people with access to their social media profiles after ISIS called on its supporters to use the Yellow Pages and Facebook to track down addresses.

While there was no independent intelligence to corroborate the warning in the Army bulletin, the counterterrorism source said “ISIS wanted to find these guys, and inspire someone to go after these guys.”

The Army said in a written statement that protection levels at installations “have not changed.”

“This document is a reminder to stay vigilant,” the Army said. “It provides renewed emphasis on force protection measures to ensure the safety and security of our DOD components, defense critical infrastructure, personnel and communities.”

After Fox News reported on the bulletin last week, the assessment has been more widely circulated, including among an association of retired Marine Corps and Navy investigators.