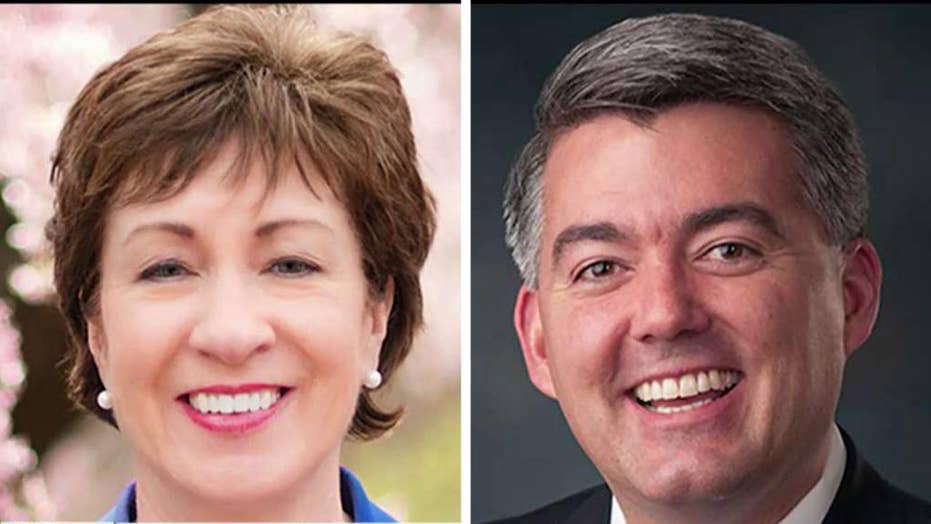 Tension is growing with Republican Senators Susan Collins of Maine and Cory Gardner of Colorado, who are both expected to face competitive races in 2020; chief congressional correspondent Mike Emanuel reports from Capitol Hill.

Even as GOP congressional leaders insist the party stands firmly behind the White House, some Republican senators are signaling support for spending bills that would end the ongoing partial federal government shutdown without including money for President Trump's proposed border wall.

The GOP's 53-member majority can weather several defections in the Senate, and Trump has threatened to use his veto power to defeat any legislation to reopen the government without wall funding. But the indications on Wednesday that some Republicans are increasingly wary of the shutdown, which Trump has said could last for "years," highlighted the potential political pitfalls of leaving hundreds of thousands of federal workers furloughed or without pay. (Some 380,000 are furloughed, and approximately 420,000 are working without pay.)

“I’m talking to a lot of folks that are in the same camp that, hey, we all want to have better, stronger border security, we all want to address humanitarian issues, but we’re all concerned about what is turning out to be the longest partial shutdown ever," Alaska Republican Sen. Lisa Murkowski told Fox News after meeting with Trump for lunch with other congressional leaders on Wednesday.

She continued: "I addressed the things that are very local to us. It’s not just those who don’t receive a federal paycheck on Friday, but there are other consequences for those of us who utilize [federal] services, whether it’s those who are seeking to get a fish scale certified so you can deliver product."

The longest shutdown occured in 1995 under President Clinton, when the federal government was shuttered for 21 days. The current shutdown would surpass that record on Saturday, and federal workers would miss their first full paycheck on Friday.

"There are consequences, and people are starting to feel those consequences," Murkowski added. "The Department of the Interior and the National Parks Service, or the operations of the IRS and whether or not tax refunds go out, don't have anything to do with border security."

Sources tell Fox News that Colorado Republican Sen. Cory Gardner remains worried about whether an extended shutdown and dysfunction in Washington could hurt the U.S.'s credit rating, which is based on factors that include politics, monetary policy, economic indicators, and externalities. The county last lost its top-notch credit status in 2011 after Standard and Poor's lowered it from AAA to AA+, amid a showdown over the debt ceiling.

Gardner, a first-term senator, is up for re-election in 2020, and The Colorado Sun has said his seat is among the most vulnerable in the Senate. A poll conducted late last year found that Gardner's favorability rating hovers near 43 percent. Hillary Clinton bested Trump by five percentage points during the 2016 presidential race in Colorado.

Another Republican senator facing a tough re-election bid in 2020 in a state that went for Clinton in 2016, Maine GOP Sen. Susan Collins, said Wednesday that she had asked Trump at lunch to consider a compromise to end the shutdown.

“I suggested that we take a look at the package that we put together last February and brought to the floor as a possible compromise," Collins said, referring to a tentative deal that would have provided visas for so-called "Dreamers," or illegal immigrants who entered the U.S. at a young age, in exchange for wall funding.

FILE - In this Wednesday, Dec. 12, 2018, file photo, border wall prototypes stand in San Diego near the Mexico-U.S. border, seen from Tijuana, Mexico, where the current wall casts a shadow in the foreground. (AP Photo/Moises Castillo, File)

Meanwhile, in the House, there was limited GOP support on Wednesday for Democrats' spending bill agenda as well. On Wednesday, the Democratic-led House approved a bill to fund the Treasury Department, the IRS and other agencies for the next year as part of a strategy to reopen the government on a piecemeal basis, but Senate Republicans dismissed the attempt as a nonstarter without any wall funding.

Eight Republicans joined 232 Democrats in voting for the measure, up from the seven who backed a similar bill last week.

The vote came as Trump, who is slated to visit the southern border on Thursday with top administration officials, walked out of a White House meeting with congressional leaders Wednesday afternoon over the partial government shutdown after House Speaker Nancy Pelosi again rejected supporting new funding for a border wall, according to those in the meeting.

Speaking to reporters after the brief session, Senate Minority Leader Chuck Schumer, D-N.Y., said the “president just got up and walked out."

“He asked Speaker Pelosi, ‘Will you agree to my wall?’ She said no. And he just got up, and said, 'Well we’ve got nothing to discuss,'" Schumer said.

The president, in a tweet, called the meeting “a total waste of time” and appeared to confirm that he left after Pelosi's answer.

Pelosi, D-Calif., said after the meeting that the president was “petulant." Schumer said Trump slammed his hand on a table in frustration, but Vice President Mike Pence and other Republicans, speaking to reporters afterward, denied that happened.

House Minority Leader Kevin McCarthy said the president was willing to make a deal in the meeting, echoing Trump's remarks during his first-ever prime time Oval Office address on Thursday, when he called for "compromise" -- even as Democrats responded by flatly rejecting a border wall.