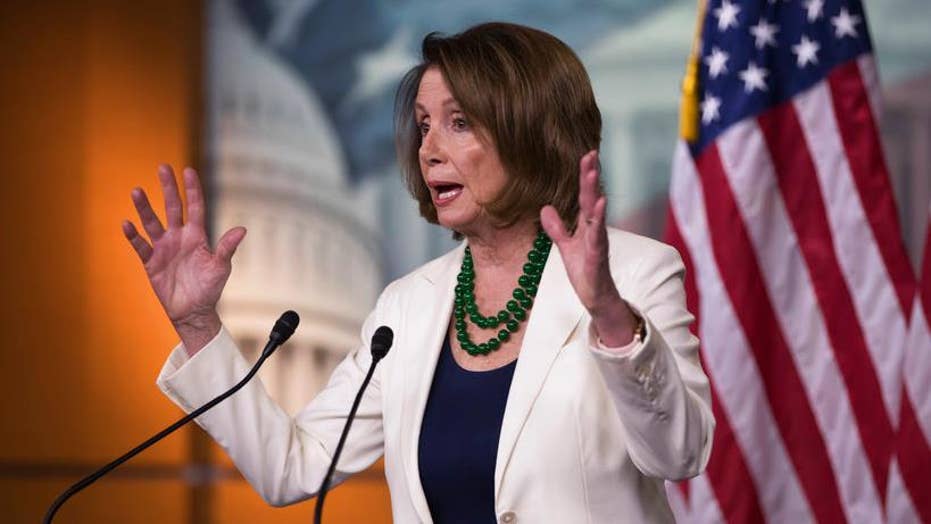 Pelosi not the key to success for Democrats this fall: Larry O’Connor

Some House Democrats wanted Nancy Pelosi out as their leader after they failed to win a string of 2017 special elections. And now some want the House minority leader out because they appear to have won a special election.

What gives with the paradox? It doesn’t make sense, except that some House Democrats are prepared to move on from Pelosi -- and some aren’t.

“The watch” is on again on Capitol Hill when it comes to Pelosi, how has been the House’s top Democrat for more than a decade.

Democrat Conor Lamb is on track to vanquish Republican Rick Saccone in a historically GOP district in southwest Pennsylvania that President Trump won by nearly 20 points.

Lamb distanced himself from Pelosi and ran as a moderate Democrat. And now Democrats are eager to replicate Lamb’s prototype in their quest to capture the House in November.

Republicans contend Pelosi is radioactive, considering how critics have branded her as a West Coast liberal losing touch with the party base.  And the plan to use the leader to put other moderate Democratic candidates on the spot this year. In other words, will you support Pelosi for House speaker should Democrats win the House? And it’s moderate to conservative Democrats who must win -- in districts Trump carried -- if Democrats are going to have a shot at winning the House.

Pelosi faced a firestorm of criticism in November 2016 after Democrats barely dented the Republican House majority. Democrats gained six seats when they needed 30 to control the House. Few expected Democrats to win the House,  but lots of political handicappers projected an anti-Trump backlash could help Democrats win at least 15 to 20 seats.

They never got close. Some Democrats tore into Pelosi. She drew a challenge for her leadership post from Rep. Tim Ryan, D-Ohio. Pelosi prevailed in the end, but an eye-popping 63 Democrats cast ballots for Ryan.

Ohio Rep. John Boehner in 2015 was forced out as House speaker, the chamber’s leader and top Republican, is a similar intra-caucus revolt.

Pelosi’s weathered the internecine tempest so far. But for how long?

Many political prognosticators suggest a Democratic wave is building this fall. If that’s the case, Democrats will swipe seats from Republicans in rural areas in the Midwest and perhaps the south where Pelosi isn’t popular. Could Democrats follow Lamb’s lead and disavow Pelosi?

That could be a sound electoral tactic. But it could cause a problem for Pelosi in her quest to return to the speaker’s suite.

The question is whether Pelosi could command the votes to again become Speaker.

This could be one of the great political incongruities of all time: Democrats win the House and simultaneously deny Pelosi the right to again clasp the speaker’s gavel. There’s a reason why Democrats were willing to re-elect Pelosi as minority leader for two years, despite 63 defections: give her another shot to lead Democrats out of the wilderness.

It may seem strange to potentially have Pelosi return to the Speakership after an eight-year exodus in the minority. But it’s far from unprecedented for house speakers to have broken service.

The first, Frederick Muhlenberg, of Pennsylvania, served as speaker in two different Congresses, interrupted by Speaker Jonathan Trumbull of Connecticut. Same with Henry Clay, of Kentucky, who enjoyed three different turns at speaker.

Speaker Thomas Reed, R-Maine, led the House in the 51st Congress, then  again in the 54th and 55th congresses. The best examples of lawmakers returning to the speakership after exile in the minority are Speakers Sam Rayburn, D-Texas, and Joseph Martin, R-Mass. Rayburn became speaker in September 1940.

Pelosi keeps close counsel on her future plans. Her confidantes point out it’s against her DNA to bow to pressure or not go without a fight. By the same token, Pelosi is an exceptional vote counter.

She knows how to gauge her caucus and if she has the votes to prevail, accurately predicting she’d get two-thirds of the vote in the Ryan challenge. If Pelosi doesn’t, she will likely exit.

It will boil down to simple mathematics.

Chatter is percolating throughout the Capitol that Pelosi may attempt a cunning departure in an attempt to bolster Democrats in their quest for the House and simultaneously hose Republicans.

House Republican leaders continued making their case this week that votes for Democratic candidates could again elevate Pelosi to speaker.

There’s a theory (and it’s just a theory) that Pelosi could time an exit later this year -- just after Republicans spend millions producing commercials and buying airtime that attempt to link Democratic candidates to her.

Such a scenario could leave Republicans on the hook with lots of outdated ad buys. They will have squandered millions of dollars making a case against someone who is no longer a factor.

Some Republicans may publicly rejoice that that they finally dispatched Pelosi. But sober GOPers know Pelosi taking her leave is bad news for them. It robs Republicans of a foil -- especially if the party is trying to link Democrats to Pelosi.

But these scenarios are just that: scenarios. And few believe Pelosi would bow out early.

Republicans successfully deployed Pelosi against Democrats when they won the House in 2010. Pelosi is certainly radioactive in certain districts. But it’s unclear if the Pelosi maneuver still works.

“This is part of the bankruptcy of the Republican Party,” Pelosi said. “They’re devoid of ideas about how they’re going to meet the needs of the American people. So it’s an ad hominem. They can’t win on the issues. So they go after a person.”

House Democratic Caucus Chairman Joe Crowley says of the Pelosi attacks: “I think they need to get a new game book. The attempts to use Nancy Pelosi, it’s failing them at this point. And I think, quite frankly, it’s sexist.”

Some quarters on Capitol Hill view Crowley as best situated to succeed Pelosi. Another possibility is her longtime rival, House Minority Whip Steny Hoyer, the chamber’s No. 2 Democrat.

Ryan repeatedly says he won’t challenge Pelosi again. But he says she must go and that there’s merit in Lamb’s approach.

“Every candidate’s locally got to make that determination as to how in their own heart, how they feel about Democratic leadership in Washington, D.C., fits into their own agenda and their own election and how their people feel locally,” Ryan said.

Did Lamb’s distance from Pelosi make a difference in the race?

“I don’t think that your opponent should choose your party’s leaders,” said Pelosi, who’s represented San Francisco since 1986. “They’re coming after me because of my city. And they’re against LGBT and they’re against poor children. That’s been my mantra. The poor children of America, I’m here to support. Yes. I am a liberal.”

It’s those “liberal” credentials that work against Pelosi, even inside her party. Can conservative Democrats support liberal for Speaker again?

Lamb’s possible win may portend good things for Democrats in November. But they likely need to win about 25 seats to retake the House. The precise number is unclear because there are a number of vacancies.

The Lamb-Saccone race still isn’t official, and the district will be redrawn for November. And the death this week of Rep. Louise Slaughter, D.N.Y., has now put that seat in play. So, it’s unknown if Democrats will win the House and face a dilemma over who to elect as speaker.

But Pelosi watch is on again on Capitol Hill.