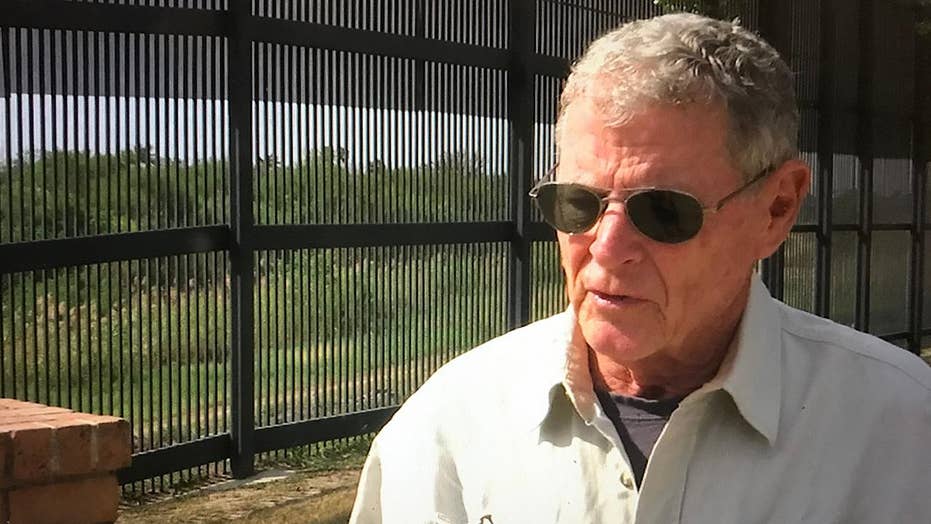 BROWNSVILLE, Texas – Oklahoma’s senior senator says he has a novel way to end the controversial practice of “catch and release” on the border.

Instead of releasing illegal immigrants once they are caught trying to enter the country – and hope they show up to immigration court – Sen.  Jim Inhofe, R-Okla., proposes sending them back to their home country. That way, he said, the illegal immigrants don’t become “absorbed” in the U.S. after they fail to show up to court.

A large number of illegal immigrants who are caught, then released, fail to show up to immigration court, he said. They end up staying in the county illegally, he said.

Following a tour with border agents in Brownsville, Texas, on Monday, Inhofe said he planned to introduce legislation in the next three weeks that would allow immigration agents to send those caught illegally crossing the border back home.

There have been a total of 136,201 apprehensions since October along the southwest border with Mexico. (Fox News)

“This merely says if they’re caught in the country, send them back to their country while they wait for the court date,” he said.

President Trump signed an executive order last year to end “catch-and-release,” when illegal immigrants are detained and let go in the U.S. But his plan, to keep the immigrants detained until their court proceedings have ended, was stymied by a years-long backlog in immigration court and shortage of beds at detention centers.

But Inhofe said “catch and release” does not have to continue because of the bed shortage.

"The reason why 70 percent of [undocumented immigrants] don't make their court date is because [the federal government doesn’t] make them stay in their country,” he said. “And, obviously, if I were in that position, I'd be off someplace else too."

A report released last year by the Center for Immigration Studies said about 46,000 illegal immigrants a year who are detained after illegally crossing the border do not appear in court and “disappear” in the county.

A report released last year by the Center for Immigration Studies said about 46,000 illegal immigrants a year who are caught trying to cross the borer do not appear in court and “disappear” in the county. (REUTERS)

“Deportation orders for failure to appear are the largest group of orders issued by immigration courts outside detention facilities,” said the report, written by Mark Metcalf, a former immigration judge in Miami.

Inhofe’s office did not comment on the details of his proposal, saying the legislation is still being drafted.

But his proposal has come under fire from immigration groups who call it inhumane and logistically impossible.

Aida Montanaro-Flores, an immigration attorney in Brownsville, said it would be a financial burden to send the immigrants back to their country and then require them to make a trip back for a court hearing.

Other immigration groups said the idea was outright ridiculous.

“Have we really stooped this low? This suggestion is absurd, illogical and cruel – not to mention a waste of resources,” said Kica Matos, director of the Washington, D.C.-based Immigrant and Racial Justice at the Center for Community Change. “Republicans need to focus on making communities safer instead of continuing to tear families apart.”