The Senate voted Friday to end debate on Judge Brett Kavanaugh’s Supreme Court nomination, setting the stage for a final vote in the chamber Saturday evening -- where the White House now believes it has the votes to confirm Kavanaugh.

The vote to invoke cloture was 51-49. While the vote was not necessarily indicative of the final confirmation vote, it moved him one step closer to sitting on the highest court in the land, with three out of four key undecided senators voting "yes" to advance the nomination.

Republican Sens. Susan Collins, R-Maine, Jeff Flake, R-Ariz., and West Virginia Democratic Sen. Joe Manchin, voted to move forward. Sen. Lisa Murkowski, R-Alaska, voted "no." With a 51-49 majority, Republicans can't afford more than one defection if all Democrats were to vote together. Collins is expected to announce her decision in a speech on the Senate floor at 3 p.m. Friday. Flake later said he intends to vote "yes," "unless something big changes."

The math for Republicans became somewhat trickier late Thursday when Sen. Steve Daines, R-Mont., said he would be attending his daughter's wedding in Montana on Saturday. He said he would return to cast the decisive vote if needed.

The source said that the White House believes Murkowski will ultimately be a "no," but Manchin, Collins and Flake will all vote "yes."

Kavanaugh’s nomination was embroiled in a controversy that gripped the nation after multiple women made sexual assault allegations originating from his time in high school and college. The most prominent allegation was from California professor Christine Blasey Ford, who said that Kavanaugh assaulted her at a high school party. That allegation resulted in a high-stakes Senate Judiciary hearing last week where both Ford and Kavanaugh testified.

Democrats said the allegations were credible and deserved a full investigation, while Republicans accused Democrats of using uncorroborated allegations to scuttle or delay the nomination -- leading to a stream of angry flashpoints between lawmakers. The accusations eventually led to President Trump ordering an FBI investigation. Republicans who had seen the FBI’s report said the FBI had produced no credible corroboration of the allegations. 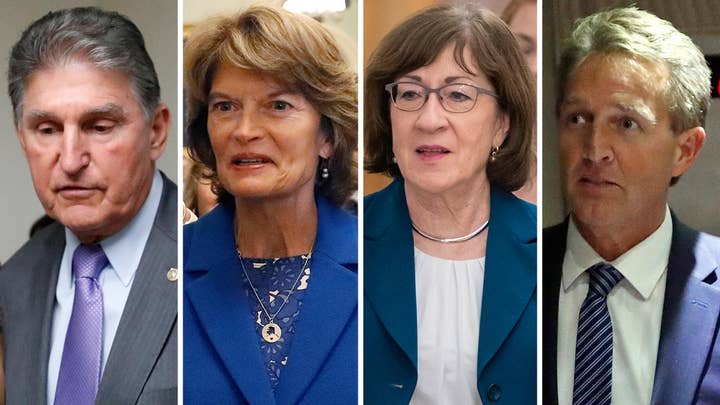 Protesters flooded the capital in the days ahead of the vote, and clashed with Republican lawmakers in an effort to sway their votes, and initially appeared to have some success. Flake demanded the limited FBI investigation last week after being cornered in an elevator by screaming protesters moments before a Senate Judiciary Committee vote to recommend Kavanaugh’s nomination.

Other Republicans later pushed back against protesters. Sen. Orrin Hatch, R-Utah, told protesters chasing him to “grow up” while Sen. Lindsey Graham, R-S.C., responded to one protester’s call for Kavanaugh to take a polygraph test, asking: “Maybe we can dunk him in water and see if he floats?”

After the vote on Thursday, protesters once again yelled at Republican senators as they walked through the Senate building.

Ahead of the cloture vote, Senate Judiciary Chairman Chuck Grassley, R-Iowa, urged the Senate to say “no to mob rule.” He also blasted Democrats for their treatment of Kavanaugh, describing it as “nothing short of monstrous.”

“The conduct of left-wing dark money groups and allies in this body have shamed us all,” he said. “The fix was in from the very beginning.”

Senate Majority Leader Mitch McConnell, R-Ky., said that the vote was "a pivotal day for us here in the Senate."

"The ideals of justice that have served our nation for so long are on display," he said, calling the last two weeks a "disgraceful spectacle."

But Democrats had pointed to not only the sexual assault allegations, which they described” but also questions about Kavanaugh’s temperament during the hearing last week and whether he had lied about his drinking during high school and college, and what certain references in his high school yearbook meant. They also sought to paint him as a justice that would swing the court deeply to the right.

Senate Minority Leader Chuck Schumer, D-NY, accused him of being evasive in his answers during his confirmation hearings on key topics. He said his views are “deeply at odds with the progress America has made in the last century of jurisprudence and at odds with what most Americans believe.”

Sen. Dianne Feinstein, D-Calif., on the Senate floor before the vote, raised concerns that Kavanaugh would vote to overturn Roe v Wade -- the 1973 decision that found a constitutional right to abortion -- and was extreme on gun rights.

But she said the last few weeks had raised further concerns, particularly his emotional defense in front of the Senate Judiciary Committee, where he had blasted Democrats for their treatment of the sexual assault allegations against him.

“This behavior revealed a hostility and belligerence unbecoming of someone seeking to be elevated to the Supreme Court,” she said.

Kavanaugh defended his behavior in an op-ed for The Wall Street Journal late Thursday, in which he expressed some regret for his fiery attack on Democrats.

“I was very emotional last Thursday, more so than I have ever been. I might have been too emotional at times,” he said. “I know that my tone was sharp, and I said a few things I should not have said.”

He added: "I hope everyone can understand that I was there as a son, husband and dad. I testified with five people foremost in my mind: my mom, my dad, my wife, and most of all my daughters."