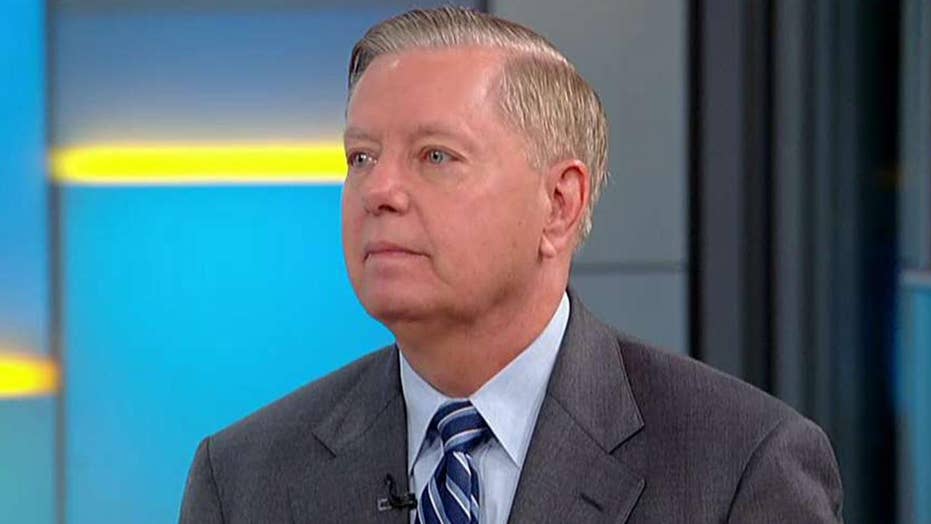 Sen. Graham: Democrats are going to get Trump reelected by embracing impeachment

The only 'cover-up' is the division in a Democrat Party being driven over the edge, Republican Sen. Lindsey Graham says on 'Fox &amp; Friends.'

Senate Republicans are vowing to crush the impeachment effort if the Democrat-controlled House passes articles of impeachment of President Trump.

Senate Majority Leader Mitch McConnell is expected to ensure that the measure, which has caused some friction even among Democrats, would be over before it could gain traction.

Democrats in the Senate will remain largely powerless as although McConnell will have to act on the impeachment articles, it also requires 67 votes – a two-thirds majority – to convict the president.

“I think it would be disposed of very quickly,” Senate Judiciary Committee Chairman Lindsey Graham told The Hill on the viability of the impeachment process. “If it’s based on the Mueller report, or anything like that, it would be quickly disposed of.”

Other Republicans echoed Graham’s comment. Texas Sen. John Cornyn told the outlet that the impeachment articles passed by the House would lead to “nothing.”

“It would be defeated. That’s why all they want to do is talk about it,” he added, suggesting Democrats are more interested in talking about impeaching Trump than actually trying to do that. “They know what the outcome would be.”

“It would be defeated. That’s why all they want to do is talk about it. They know what the outcome would be.”

Senate Republicans also say an impeachment trial of Trump would also get just the bare minimum time on the floor.

“Why on earth would we give a platform to something that I judge as a purely political exercise?” Sen. Thom Tillis told The Hill.

“We have to perform our constitutional duty, but if people think that we’re going to try and create a theater that could give you the perception that this is a matter that rises to the level of Watergate, that’s nonsense.”

“Why on earth would we give a platform to something that I judge as a purely political exercise?”

NANCY PELOSI 'ISN'T GOING TO BE ABLE TO HOLD OFF' IMPEACHMENT PUSH FROM INSIDE HER PARTY, SENIOR HOUSE DEM TELLS FOX NEWS

He added that an extended trial would be “rewarding what I view as bad behavior on the part of the House.”

Michigan Democrat Rashida Tlaib said Sunday that the House is “moving towards” supporting the measure to impeach Trump.

“I think it’s moving towards that. It's going to demand it, it already is," Tlaib said on “Meet the Press,” listing several actions in which, according to her, the president acts as if he were “above the law.”

This comes despite House Speaker Nancy Pelosi’s efforts to quell talks impeaching the president and have repeatedly warned the Democrats against proceeding with such move.

A one senior Democrat told Fox News that Pelosi won’t be “able to hold off on impeachment much longer” as the impeachment talk in her party is gaining traction and embraced by the voter base.