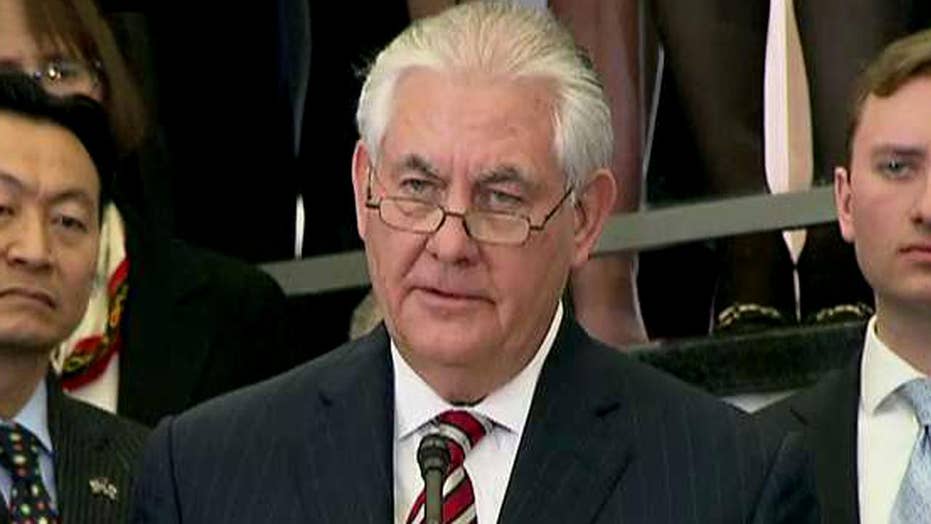 Tillerson to State Dept.: We have to work as one team

In what could be his first official trip abroad since becoming secretary of state, the State Department announced on Wednesday that Rex Tillerson will travel to Mexico sometime in the next few weeks.

What would normally be a fairly routine visit for the United States’ top diplomat looks to be anything but as the trip comes at a time of newly strained relations between Washington and one of its closest allies. President Trump’s executive order on immigration and the border wall and his fiery rhetoric on issues ranging from border security to free trade have caused major blowback south of the border and iced over the once warm diplomatic relations between the two nations.

Experts contend that Tillerson – the former CEO of oil giant ExxonMobil – has a difficult task ahead of him as he will have to espouse the Trump administration’s policies while also attempting to assuage the concerns of a wary Mexican government.

“It is clear that there is a need for significant behind-the-scenes work to put the U.S.-Mexico relationship back on solid footing,” Jason Marczak, the director of the Latin America Economic Growth Initiative at the Atlantic Council's Adrienne Arsht Latin America Center, told Fox News. “It’s going to be a tough balancing act that Tillerson will have to walk with Mexico.”

The State Department has neither released information about when Tillerson's trip will take place nor what will be discussed when he arrives in Mexico, but it is likely to continue the talks that the secretary of state held with Mexico’s Minister of Foreign Affairs Luis Videgaray on Wednesday in Washington, D.C.

In a statement, acting State Department spokesman Mark Toner said that Tillerson’s conversation with his Mexican counterpart was “constructive” and that the discussion focused on issues “including law enforcement, migration and security.”

“Mexico and the United States have numerous things to discuss, from the high profile and tweeted issues of NAFTA, immigration, and security to a whole host of less known but vitally important challenges,” Shannon O’Neil, a senior fellow for Latin America studies at the Council on Foreign Relations, said in an email to Fox News. “Like the Secretary of States before him, he is going to begin these conversations for a Trump administration.”

One of the big topics of conversation that Tillerson is expected to address during his trip south is the border wall and Trump’s assertion that Mexico will pay for it.

Since his time on the campaign trail, Trump has continually promised that Mexico will put up the funds to construct the wall. And Mexican lawmakers from President Enrique Peña Nieto on down have continually ridiculed the idea.

White House chief of staff Reince Priebus has said that while the administration hasn't yet determined just how to make Mexico pay for the wall, they’re reviewing a "buffet of options" that could include a tax on goods coming across the border, import and export taxes — even a tax on drug cartels or fines to people who come to the U.S. illegally.

Trump’s executive order on immigration and the wall irked Peña Nieto so much that he scrapped a planned Jan. 31 trip to Washington. A phone conversation between the two world leaders late last month was meant to patch up the touchy relations, but media reports from a leaked transcript of the call show Trump threatening to send U.S. troops to stop the "bad hombres down there" and humiliating Peña Nieto.

“There is going to be a lot of relationship fixing with Mexico,” Marczak said. “The historical legacy on the Mexican side is one of mistrust and skepticism of the U.S. and it’s a real possibility that Mexico could fall back into that mindset.”

Another issue that has put Trump at odds with Mexico and is likely to be a major talking point on Tillerson’s trip is the future of the North American Free Trade Agreement.

Trump has been adamant that the U.S. is getting a raw deal out of NAFTA and wants to re-negotiate the landmark pact with Mexico and Canada that has been in place since 1994.

Mexico says it will negotiate changes, but won't accept import quotas or new tariff barriers. The country also reopened a 90-day consultation period with private business groups about possible changes and the country’s economy department said the consultations will be held simultaneously with similar talks in the U.S.

“The rhetoric around NAFTA has not been good, but it does need to be modernized,” Marczak said.

Tillerson’s visit will not just consist of playing diplomatic peacemaker, but could also focus on areas of mutual interest between the U.S. and Mexico – namely when it comes to combatting drug cartels and migration from Central America.

Mexico’s ongoing war with the country’s drug cartels has been a major issue for the country ever since former President Felipe Calderón went on the offensive against the cartels in 2006. Peña Nieto promised to reduce violence in the country and clamp down on cartel leaders. He has fulfilled that vow in part – especially with the capture and extradition of Sinaloa Cartel boss Joaquín “El Chapo” Guzmán – but violent crime is still endemic in parts of the country and many smaller drug trafficking organizations have arisen since the demise of the major cartels.

“We need to help them stop the drugs from entering the U.S., but we also need to clamp down on weapons going southbound,” Balido said. “I’m a big supporter of the Second Amendment, but most of the weapons that end up in the hands of the cartels come from the U.S.”

Whatever is on the agenda when Tillerson travels to Mexico, it is clear that he will have a full docket and that the trip will be a major test for the new secretary of state.

“What Tillerson will be like as a diplomat, right now nobody knows. The jury is still out,” Marczak said.