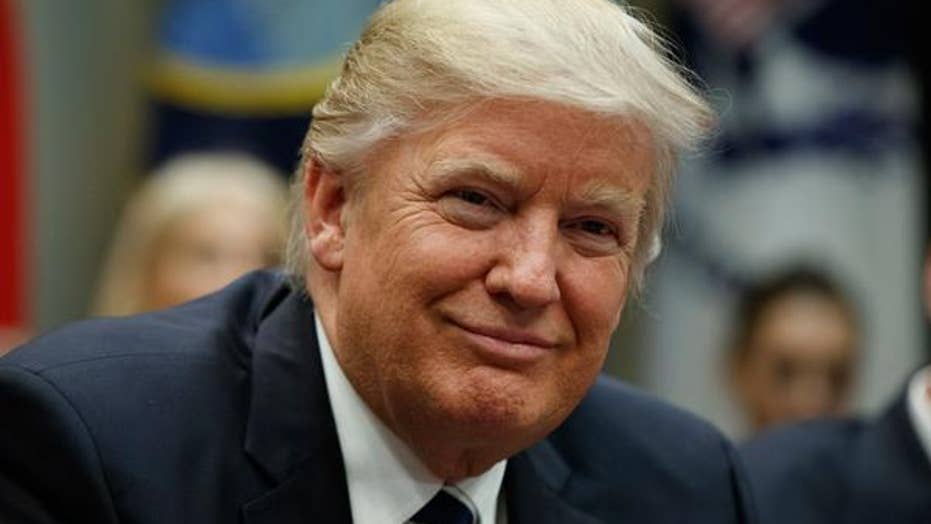 Can Trump make Mexico pay for the border wall?

Strategy Room: Christopher Hale and Kevin McCullough on how the White House will try to convince Congress to back his plan

As Homeland Security Secretary John Kelly voices confidence he can oversee the construction of a U.S.-Mexico border wall within two years, questions remain over how President Trump might fulfill the other half of his campaign promise – making Mexico foot the bill.

But despite Mexican leaders’ insistence they will not pay, and no shortage of skeptics this side of the border, the president’s team and outside analysts say Trump has several options for at least seeking reimbursement in the end.

“Mexico may pay for the wall and then some,” said Marc Thiessen, a fellow with the American Enterprise Institute and former speechwriter for then-President George W. Bush.

White House Chief of Staff Reince Priebus said Sunday on CBS News’ “Face the Nation” that the administration indeed has “a buffet of options.”

DHS SECRETARY: WALL SHOULD BE DONE IN TWO YEARS

Based on campaign documents and comments from Press Secretary Sean Spicer, this could include: a 20 percent tax on imports from Mexico, an increase in visa and border-crossing card fees, or even a lump-sum payment from Mexico of billions of dollars. The latter is perhaps the least likely scenario, considering Mexican President Enrique Pena Nieto’s vow that his country “would not pay” – though the Trump campaign had floated the possibility of threatening to cancel visas and/or restrict wire transfers as leverage.

The import tax option gained prominence over the last week after White House Press Secretary Sean Spicer mentioned it, in the wake of Trump signing the executive order directing the wall’s construction.

Though Trump earlier had voiced skepticism about the tax, Spicer said last Thursday: “If you tax that $50 billion at 20 percent of imports – which is, by the way, a practice that 160 other countries do right now … we can do $10 billion a year and easily pay for the wall just through that mechanism alone – that’s really going to provide the funding.”

Spicer later clarified the tax was only a possibility and not a hard policy proposal, describing the idea as one “route” for financing the wall.

Congressional Republican leaders say they plan on drafting a budget measure to provide funding for the wall’s design and construction on the front end. As for eventual reimbursement, Thiessen touted the import tax option as a “triple play.”

“It’s a trifecta: it pays for the wall, it’s good tax policy and there is nothing Mexico can do about it,” Thiessen told Fox News. “Trump wants to encourage exports and discourage imports, and this will force Mexico to pay—if you want to do this without a big diplomatic blow up and actually get the money from Mexico, this is the way to do it.”

Thiessen specifically was touting what’s known as a “border adjustment” plan, a broader proposal going beyond just Mexico which would exempt exports from taxation while taxing imports to the U.S.

But Director of Research at the Center for Immigration Studies Steven Camarota said “Mexico won’t pay, the Mexicans will,” as he played down the imperative of making Mexico pay.

“The way I see it is, the wall should pay for itself if it is effective,” Camarota said. “If the wall keeps immigrants out of the country, it is a net-fiscal benefit for the country, and so it pays for itself.”

At last week’s GOP retreat in Philadelphia, Senate Majority Leader Mitch McConnell, R-Ky., and House Speaker Paul Ryan, R-Wis., estimated a $15 billion cost associated with initial construction of the border wall, though independent research groups estimate it could be as high as $25 billion.

Under the border adjustment proposal, Thiessen estimated the wall could be fully paid for in one to two years.

GOP leaders say the president will send a supplemental appropriations request to Congress asking for funding for the wall, which an aide from the Senate Appropriations Committee told Fox News has not yet been submitted.

But Democrats are likely to resist anything the Republicans put forward.

“The same Republicans who howled ‘fiscal responsibility’ when it comes to investments to help working families are apparently willing to light billions of taxpayer dollars on fire and add to the federal deficit in order to build Trump’s useless border wall,” Drew Hammill, a spokesman for House Minority Leader Nancy Pelosi, D-Calif., said. “The wall is a multi-billion dollar boondoggle in the making, and Republicans should be embarrassed at their brazen hypocrisy in enabling it.”

Rep. Henry Cuellar, D-Texas, told Fox News the American taxpayers will ultimately be paying for the wall no matter what the administration says.

“Anyone that feels that Mexicans will pay this, in all due respect, is in fantasy land,” Cuellar told Fox News. “If anyone thinks we’re going to do 1,954 miles of fencing, it’s not going to happen.”

But former Ohio Democratic Rep. Dennis Kucinich, a Fox News contributor, said Congress has a responsibility to review the request.

“This kind of stuff doesn’t just happen overnight,” Kucinich said. “We don’t want taxpayers to have to take it in the neck.”

Though Republicans have the majority on the Hill, Thiessen urged Democrats to go along: “This is a pro-trade, pro-entrepreneurship, pro-U.S. manufacturing, pro-corporate tax reform – it’s good for business.”