The 2020 presidential candidate lays out his agenda to voters in Bethlehem, Pennsylvania; Peter Doocy reports on the night's biggest moments.

Sen. Bernie Sanders, I-Vt., on Friday defended his support of left-wing regimes and his antiwar activism in the 1980s, saying, “I did my best” to stop American foreign policy during the administration of former President Ronald Reagan.

“As a mayor, I did my best to stop American foreign policy, which for years was overthrowing governments in Latin America and installing puppet regimes," the 2020 Democratic presidential hopeful said in an interview with The New York Times. “I did everything that I could as a mayor of a small city to stop the United States from getting involved in another war in Central America trying to overthrow a government."

Sanders spoke to The Times after the paper a day earlier published a story providing more details on Sanders’ focus on foreign policy when he served as Burlington mayor and how that led to him forming connections with repressive left-wing governments across the globe.

The report details how Sanders journeyed for 14 hours to reach Nicaragua in 1985 and met with socialist President Daniel Ortega on the sixth anniversary of the Sandinista revolution. Amid anti-American chants (“Here, there, everywhere, the Yankee will die.”) Sanders reportedly celebrated the Sandinista takeover.

“After many years of economic and political domination, Nicaragua is determined not to be a banana republic anymore, and it’s free to make its own decisions,” he said.

Sanders told the Times Friday that he doesn’t remember hearing the chants, but added: “Of course there was anti-American sentiment there. This was a war being funded by the United States against the people of Nicaragua. People were being killed in that war.”

Asked if now viewed Ortega differently, he said he is “very concerned about the anti-democratic policies of the Ortega government.”

The Times reports that Sanders pushed a number of measures as mayor to oppose Reagan policies in Central America. He established two sister-city programs with cities in Russia and Nicaragua. He urged Reagan to “stop the CIA war against the people of Nicaragua" and embarked on trips to the Soviet Union and Cuba. On the Soviet Union, he described it Friday as “an authoritarian dictatorship” and said that he held those beliefs in the 80s as well. 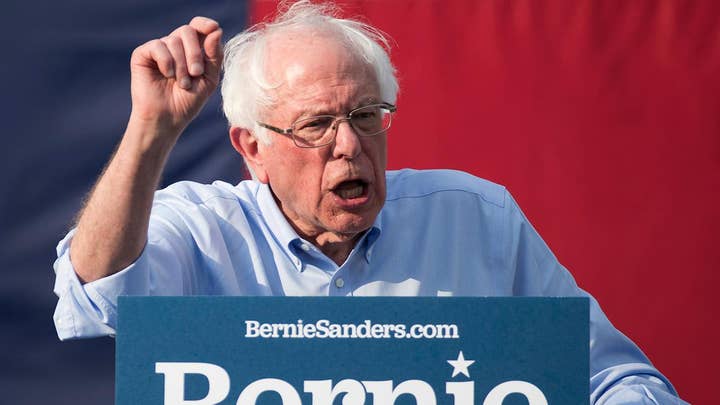 “On the other hand, I was going to do everything that I could to prevent a nuclear war between the United States and the Soviet Union,” he said.

His trip to the U.S.S.R. in particular has drawn scrutiny in the past, as have his remarks apparently glossing over some of the more disturbing aspects of communist countries -- such as food shortages.

“It’s funny sometimes American journalists talk about how bad a country is because people are lining up for food. That’s a good thing,” he said in one vintage video unearthed by conservative activists earlier this year. “In other countries, people don’t line up for food, rich people get the food and poor people starve to death.”

After a trip to the Soviet Union in 1988, he held a press conference, along with his wife Jane, and said he was “extremely impressed” by the USSR’s public transportation system and that the “palaces of culture,” which he told an audience were much better than anything the U.S. had mustered.

“I was also impressed by the youth programs that they have, their palaces of culture for the young people, a whole variety of programs for young people, and cultural programs which go far beyond what we do in this country,” he said.

On Friday he said that he thought many of the principles that the Soviet system was based on was good, even if the delivery was poor.

In another 1985 interview with a local TV station, dug up by BuzzFeed News in 2015, he said of Cuban dictator Fidel Castro that “just because Ronald Reagan dislikes these people, doesn't mean that people in their own nations feel the same way."

"In 1959 ... everybody was totally convinced that Castro was the worst guy in the world and all of the Cuban people were going to rise up in rebellion against Fidel Castro," Sanders said. "They forgot that he educated their kids, gave their kids healthcare, totally transformed the society."

Sanders’ history of aligning with left-governments has been well known but has come under greater scrutiny since he announced his 2020 presidential bid and stands a real chance of winning both the Democratic nomination -- and the White House.

Otto Reich, a former special envoy to Latin America who helped oversee Reagan administration policy on Nicaragua, was blunt in his assessment to the Times of Sander’s connections: “He has, by virtue of these travels and associations, joined up with some of the most repressive regimes in the world."